In the chronology of ’70s cinema, Chinatown is sandwiched between two interpretations of Philip Marlowe. Preceding it is Robert Altman’s 1973 deconstruction, The Long Goodbye, which starred Elliot Gould as Raymond Chandler’s most famous character. Following it is Dick Richards’ 1975 film, Farewell, My Lovely, starring the actor born to play Marlowe, Robert Mitchum.

Chinatown’s placement in the middle of these releases is appropriate. Its lead actor, Jack Nicholson, evokes the qualities of both Marlowe portrayals. As Gould’s contemporary, he brings the same ‘60s counter-cultural street cred, yet one could also imagine the laconic, smooth-talking and cynical Jake Gittes working the same beats as Mitchum’s anti-heroes of the 1950s.

Robert Towne’s labyrinthine script needs the decade-straddling elements Jack’s image provides; Chinatown tells a traditional noir story minus the puritanical censor of its studio system-era predecessors. The film makes this clear with the bookends of  its opening credits sequence. The credits start with the Paramount logo of Double Indemnity (note to Nebraska: THIS is how you set mood with an old-school logo), scroll upward to the gorgeous strains of Jerry Goldsmith’s fantastic score, and end with a close-up black-and-white photo of a bare-assed man entangled between the legs of a married woman.

Those photos are courtesy of Jake Gittes (Nicholson), a Los Angeles private dick specializing in affairs of the heart and other associated body parts. The wife in question belongs to Curly (Burt Young), a seemingly throwaway character who will figure in Chinatown’s horrific climax. Gittes’ next customer, a society dame named Evelyn Mulwray (Diane Ladd), sends us on the path to that last scene. She’s seeking what Curly sought, evidence of unfaithfulness by her spouse.

After discovering Mrs. Mulwray is married to a powerful water department exec in Los Angeles County, Gittes advises her to “let sleeping dogs lie,” words that will come back to haunt him. She demands satisfaction, and a contract is drawn up for Gittes’ work. When Gittes’ tame pictures of Mr. Mulwray paddling a rowboat with a pretty young thing make the papers, Mrs. Mulwray shows up to protest and to sue. Her contract would prohibit this, but as luck would have it, this is a different Evelyn Mulwray than the one who commissioned the work. She’s played by Faye Dunaway and is revealed to be the genuine article. Like many a dame who has walked into a dick’s office, she brings death and trouble with her.

The rest of the plot is on DVD, Blu-ray, and occasionally Turner Classic Movies. Besides, I probably couldn’t explain it all anyway. As many times as I’ve seen Chinatown, I’m always discovering something new. The Oscar-winning screenplay demands one’s attention while reminding us that the twisty knots in noir don’t necessarily need untying. Raymond Chandler famously responded “I don’t know” to one of the bigger questions in his own book, The Big Sleep. There’s nothing that complicated in Chinatown, but it did take numerous viewings before I could piece it all together. 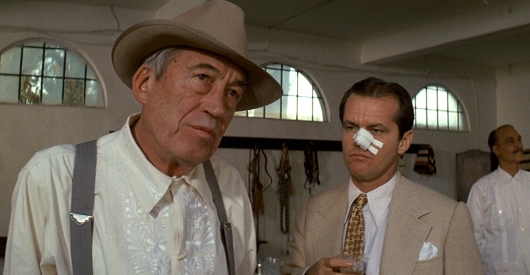 Gorgeously shot by the great John A. Alonzo, Chinatown basks in the bright L.A. sunshine and the darkest heart of its nights. On this viewing, I noticed the companion pieces Alonzo and director Roman Polanski visually stitch into the film. Some are used as foreshadowing, others as reminders. The bullet hole on the passenger side of the real Evelyn Mulwray’s windshield after she rescues Gittes from certain death, the broken bifocals in the pond, and Gittes’ “nosy” present from Polanski himself (in a memorable role) all hint at the gory injury in the film’s climax. Both Mr. Mulwray and Gittes lose a shoe in the Oaktown Reservoir, leading the latter to utter the ad-worthy phrase “Goddamn Florsheim Shoe!” And the Albacore Club fish logo sewn into Emma Dill’s quilt is a throwback to Gittes’ lunch with the film’s main villain, Noah Cross:

“I hope you don’t mind,” says Cross about the entrée, “I believe they should be served with the head.”  So one can stare the victim in the eye while the damage is done.

Noah Cross is Chinatown’s heart of darkness, spoken about more than seen, embodied with incredible power and terror by the director who kicked off the noir genre in Hollywood, John Huston. With less than 20 minutes onscreen, Huston creates one of the most memorable portraits of evil in film. He’s always too calm, and his faux-grandfatherly charm is unnerving: “’Course I’m respectable,” he tells Gittes. “I’m old. Politicians, ugly buildings, and whores all get respectable if they last long enough.”

Huston was the voice of God in his movie version of The Bible. In Chinatown, he uses that same honey-smooth, authoritative voice for more devilish purposes. Cross dispenses a common sense folksiness laced with arsenic. It’s his lines you remember more than any other, for he provides the message one takes away from Chinatown: “You see, Mr. Gitts, most people never have to face the fact that at the right time and the right place, they’re capable of anything.”

Jake Gittes knows this, and as hardboiled as Nicholson plays him, he also shows the unfinished business of his former life as a cop gnawing at him. Gittes left the force after some mysterious incident in the Chinatown district, one that remains maddeningly unexplained. It must have been terrible, for Goldsmith’s score turns ominous at the mere mention of the film’s title. It must also have been something Gittes could have prevented. When asked by Mulwray what he did in Chinatown, he says, “as little as possible.”

Gittes hides this incident and its emotional repercussions behind a brick wall of cynicism to which Dunaway’s Evelyn Mulwray takes a sledgehammer. Because of her situation, and the inherent chivalry of men of that era, Gittes really thinks he can outsmart evil, that he can finally gain redemption in the very location where he lost it. The viewer also believes this, and Chinatown is deliciously, intolerably cruel as it toys with us. Gittes’ final act is an exercise in futility, because Los Angeles, the city that spawned the noir of James Ellroy and Walter Mosley, is a cobra that hypnotizes with beauty before striking out with death.

Everyone remembers that “Forget it, Jake, it’s Chinatown” is the last line of Chinatown. What most people don’t notice is Jake Gittes’ last line in the film, “as little as possible.” Nicholson says it in the calm manner of Noah Cross, and at that moment, Jake Gittes finally evolves into the hardened, emotionless, jaded shell of noir’s private detectives. Sam Spade and Philip Marlowe come pre-packaged this way; Jake Gittes’ tale is an origin story for their type.