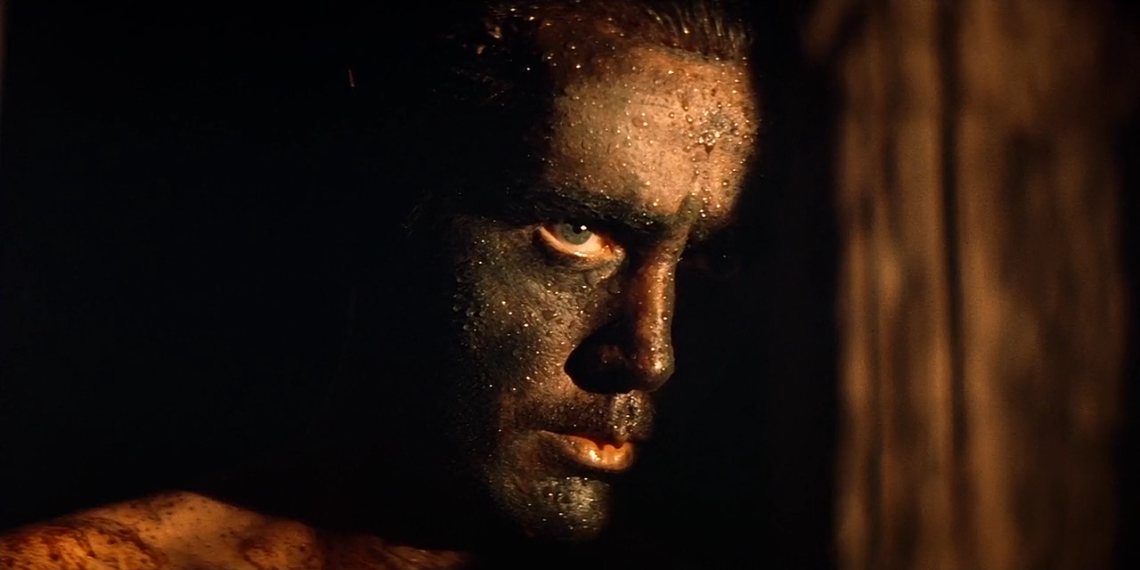 Editor’s note: Apocalypse Now is one of the 10 best films of the 1970s voted on by staff, friends, and readers of Movie Mezzanine. For the sake of surprise, we’ll wait to reveal where this and every other film ranks on the list until the very end. We hope you enjoy.

So states Dennis Hopper’s nameless photojournalist in Apocalypse Now, director Francis Ford Coppola’s 1979 Vietnam War epic. His words could apply to everyone in the film, of course, including himself, a loopy devotee of the destructive (yet not actually deranged) Colonel Kurtz. There’s not a single character in the film who isn’t lost and either searching for their moral self or embracing a new amoral one. It took three hours for Michael Corleone to be corrupted in The Godfather; in Apocalypse Now, everyone is damned in the opening shot.

The film, which follows special ops officer Benjamin Willard (Martin Sheen) as he travels up the Nung River to assassinate rogue Special Forces Colonel Walter Kurtz (Marlon Brando), is a rare masterpiece that arose out of a notoriously troubled production: Brando arrived unprepared and overweight, Sheen suffered a heart attack, bad weather destroyed sets, drug abuse was rampant among the crew, the five-month filming schedule turned into sixteen, and the budget kept ballooning. The shoot itself became the subject of a separate documentary; according to some accounts, Coppola was suicidal by the time production wrapped.

Yet it’s precisely because of these struggles that Apocalypse Now is one of the greatest war films—indeed, along with Oliver Stone’s Platoon, probably the greatest war film—ever made. In retrospect, it seems obvious that the experience of Vietnam could not be adequately captured within the fixed, clean parameters of a Hollywood production. Sanity rarely begets insanity, so perhaps the only way to accurately portray madness is to go a little mad yourself. As Coppola himself famously stated at a Cannes press conference: “My film is not about Vietnam. It is Vietnam. It’s what it was really like. It was crazy… And little by little, we went insane.”

There were reportedly over 200 hours of film shot, and it took editor Walter Murch nearly two years to edit it all down into a final product (and there were still multiple cuts that were screened). There’s a hallucinatory feel to the proceedings, as shots are dissolved and superimposed onto each other, people mesh into nature, and machines meld into stone. It’s a hazy, dreamlike attempt to define the undefinable, and it works. The opening minutes, in which Willard’s upside-down visage is superimposed over an air strike and then the stone idol from Kurtz’s sanctuary, convey the devastation of war in all its forms: past and future become connected by fire, a visual reflection of Willard’s drunken PTSD-fueled rage.

Coppola sets these beginning scenes to “The End” by The Doors, a choice which not only expresses a profound lament for the destruction on display but indicates that this is sadly not the beginning of Willard’s journey. Apocalypse Now ends with another striking shot of images superimposed on top of each other, connecting it back to the start. The true tragedy of Willard is not that he loses his soul in his quest for Kurtz, but that it was already lost in unseen battles long ago. He’s trapped in a never-ending cycle of trauma, going from mission to mission with a few weeks of debauchery in between, and this trip upriver is only a more pointed reflection than usual of his brokenness. Like everyone touched by the war machine, he’s been churned up and spit out, now a distorted, damned version of himself. He has nothing outside of this. As he puts it: “I took the mission. What the hell else was I gonna do?” 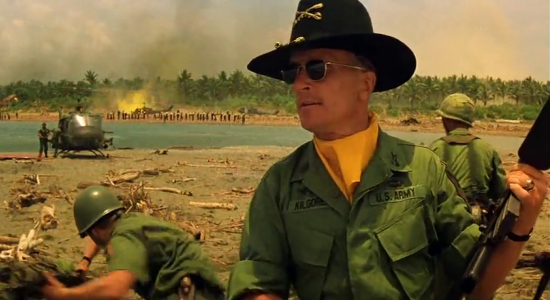 The cynicism of Apocalypse Now is summed up by the message that he finds scrawled in Kurtz’s notebooks: DROP THE BOMB. EXTERMINATE THEM ALL! Is he referring to the Viet Cong, the U.S. military, or the entire human race? Nobody is immune from the degradation. Playboy Playmates are pawed at, civilians are gunned down, one outpost has no commanding officer, Americans prey on other Americans, and Dennis Hopper’s photojournalist is a mutt who really doesn’t like fractions, man. Willard at one point notes that even Kurtz himself wants to die. There’s no such thing as heroism in Apocalypse Now, no appeals to touted ideals of noble sacrifice in the name of defeating evil. The “horror” war has revealed to Kurtz is that we’re all equally broken; it’s only a matter of recognition. Just as Michael Corleone deluded himself into thinking he could take over the family business without losing his soul, so the U.S. military thought it could enter Vietnam and not emerge fundamentally changed.

The army brass that assign Willard his mission act as potential audience stand-ins, recognizing that war is dehumanizing and morally repellent while still justifying their involvement. “In this war things get confused out there,” General Corman tells him. “There’s a conflict in every human heart between the rational and the irrational, between good and evil. And good does not always triumph.” He tells Willard that every man has a breaking point, that Kurtz has gone crazy. The worldview of Apocalypse Now is far more pessimistic: war by its nature is insane, and the only thing that differentiates Kurtz from his former colleagues is his acting outside of the culturally acceptable asylum. He’s no longer under any delusions about his own nature, so in a strange way, he’s the sanest person in the film.

After all, is there really that much difference between Kurtz and Lieutenant Colonel Kilgore, played with gleeful aplomb by Robert Duvall? Kilgore is a sadist for whom the brutality of war has become nothing more than an inconvenience, but he’s the army’s sadist, so he’s free from judgment. He feigns empathy with a dying enemy, only to immediately ignore him when he discovers his favorite surfer might be visiting. Unlike Kurtz, who secretly longs for death, Kilgore seems to think he’s invincible, strutting around during a firefight like he’s bulletproof. He’s so morally lost that he moves deep into Viet Cong territory, costing the lives of several American soldiers and dozens of innocent Vietnamese civilians, just so some of the men can catch some good waves. Kurtz may be a monster, but at least he knows it, and he takes no joy in it.

The word “apocalypse” derives from the Greek for “revelation,” so in effect the title of Coppola’s masterpiece is a call for us to wake up and stop lying to ourselves about who we are and what we did and what we still have the power to do. Kurtz’s epiphany leads him to embrace his capacity for evil by creating a world without morality. Apocalypse Now confronts us with “the horror” so effectively that I can only hope that maybe, just maybe, it might help us learn from our mistakes. Kurtz tells Willard to go home and tell everyone the truth about what happened. Somehow, despite all the obstacles, Coppola managed to do just that.