“Hellion” Is Merely As Generic As Its Title

One of the few consolations of a beloved television series going off the air is seeing where the members of its cast wind up next. For five white-knuckle seasons, AMC’s Breaking Bad was a prime showcase for Aaron Paul, who, over the course of the series, grew from goofy gangsta meth addict-dealer to blighted, brooding pawn in others’ murderous games of corruption. It’s Paul’s unique ability to maintain a wounded puppy-dog quality throughout that makes him likable on the show, even when committing some truly reprehensible crimes.

In the new indie film Hellion, he does little to evolve from such familiarity as Hollis, a boozy single dad to two boys who are on different patches of the same rocky road. Jacob, played by newcomer Josh Wiggins, is 13 and already has a criminal record. He has an affinity for off-road bike racing, acts of vandalism, and sleeveless t-shirts. His younger brother Wes (Deke Garner) is 10, and desperately wants to be part of the gang. It’s after his initiation that Child Protective Services seizes a wailing Wes and puts him in the care of his aunt Pam (Juliette Lewis), tearing the already struggling family further asunder.

The gall of Hellion begins with the miscasting of Hollis. Aaron Paul’s immediate and unflagging softness erases the erratic temperament of a widower who can’t control his volatile son. He also appears to be too young, no matter how much bushy mountain-man facial hair he’s sporting. It’s a strangely auto-piloted performance from a typically present actor. Hollis isn’t physically abusive toward his boys – a commendable decision, as it demonstrates how emotional pain can leave equally lasting scars – but his ephemeral presence in their lives ultimately translates to the screen. He shows restraint to the point of risking disappearance altogether. 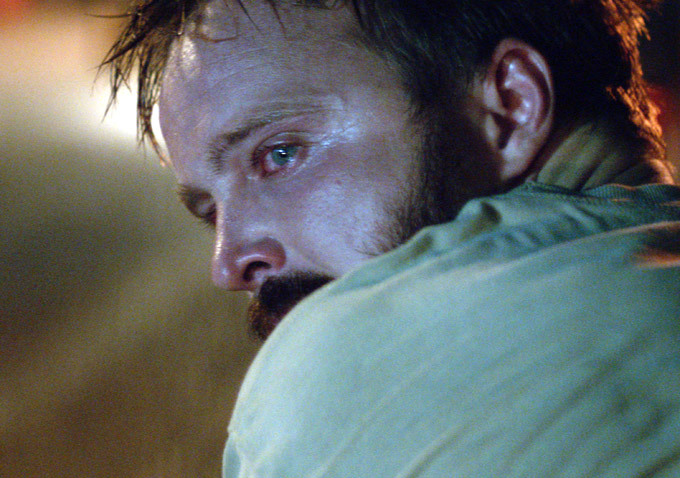 Hellion takes place in your average Sweatytown, U.S.A. where everyone knows everyone, which leads to some amusing first-name bases. The regular cops know Hollis and his boys, and even show leniency toward their unruly behavior. But because rebellion and alcohol is in their nature, the many scenes of disobedience are repetitive and frustrating, and ultimately bottleneck Hellion’s too-abrupt emotional payoff.

Writer-director Kat Candler makes a bit of a mess of things, failing to decide whose story she wants to commit to telling. The title suggests that would be Jacob, but the screen time devoted to Hollis suggests otherwise. Hellion is one of those gummy, self-serious trifles that bank on a breakthrough performance from its young star. At least one scene – a public meltdown in a restaurant – suggests that Wiggins deserves extra attention, but it could just be his convincing lip quiver and a few well-timed tears. His low-hanging brow does most of the grunt work. In fact, he’d be a dead ringer for a live-action Sid, the vicious next-door neighbor in Toy Story, if ever the sacrilegious decision to adapt the animated classic were made.

The standout of Hellion, perhaps accidentally, is Garner. The cherub-cheeked young actor is splendidly naturalistic, effortlessly moving and, most miraculously, brings out a warmth in Juliette Lewis previously unseen in her repertoire. Their brief, rich scenes together magnify the cracks in the parallel stories spotlighting Jacob, his delinquent friends, and Hollis. However, the movie loses all credibility in the third act when all of these threads converge in a laughably over-the-top descent into sadistic melodrama.

To wear the mantle of capital-H Hellion, the subject should be the hellion to end all hellions. But as it turns out, Jacob is just another troublemaker with a fractured upbringing. Hellion is not The Godfather of misbehaved youth, but rather a story as generic as its title.