“Guardians of the Galaxy” Gunns For Greatness

Sometimes a cigar is just a cigar, and sometimes a Marvel movie is just a Marvel movie. But when a Marvel movie has former Troma bad boy James Gunn stationed at the helm, orchestrating a grand space opera peppered with off-radar characters with no mainstream cachet, it becomes something else entirely. Consensus may have crowned April’s Captain America: The Winter Soldier as the burgeoning studio’s best screen effort to date, but pound for wacky, colorful pound, Gunn’s contribution to Marvel’s cinematic universe, Guardians of the Galaxy, has that film beat by a country (or perhaps cosmic) mile.

Cue the mystified sideways glances. If the title means nothing to you, worry not. Gunn has brought a sense of self-awareness to the production, and with tongue firmly planted in cheek; audiences might not know about the eponymous team of squabbling antiheroes, but nobody else in the film does, either. Guardians of the Galaxy represents Marvel’s biggest gamble to date, topping even their slow-burning scheme to bring The Avengers to theaters in 2012 as a creative and commercial risk. At least that superhero rumpus had five lead-in pictures to roll out the red carpet for its premiere.

Guardians, meanwhile, has no such luxury of introduction, but it turns out that brand recognition isn’t the only way to sell a big, ballsy blockbuster to modern audiences. Odds favor an outcome where Gunn’s efforts on Guardians of the Galaxy turn a handful of unknown quantities into instant household names (and maybe give him a visibility boost in the process); in a 2-hour movie boasting a sizable ensemble cast, each of the primary characters pop. The lack of familiarity may actually be a boon here – we might not have a clue who these people are or where they come from, but we’re also not shouldering the burden of preconception, either.

This all gives Gunn and his troupe breathing room to sculpt Guardians of the Galaxy as they please. The film begins on an intimate note – the death of a young boy’s mother – before flash-forwarding to the future, where the boy, Peter Quill, aka Star-Lord (Chris Pratt), has grown into a man and a thief. After an ill-advised heist, the plot expands, and his act of piracy takes on universal implications. Peter’s bounty, a spherical MacGuffin, happens to be a hot commodity, and a whole cavalcade of ne’er-do-wells end up on his trail once it’s in his possession;  lime-hued assassin Gamora (Zoe Saldana), tattooed maniac Drax the Destroyer (WWE’s Batista), adorably scrappy genetic experiment Rocket Raccoon (Bradley Cooper), and Rocket’s hired muscle, Groot (Vin Diesel), a sentient and woefully inarticulate tree. 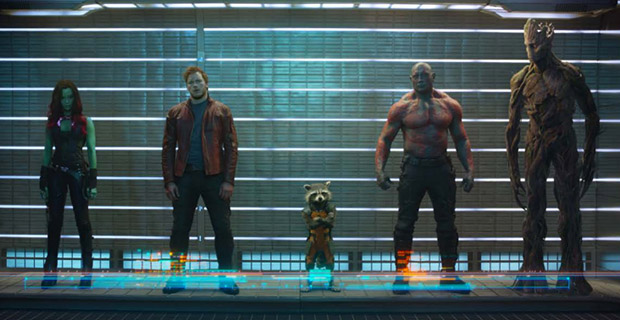 They’re a rowdy, restless bunch, but in short order, they kinda/sorta manage to bond and avoid killing each other. More troublesome is Ronan the Accuser (Lee Pace), an alien tyrant devoted to slaughtering entire worlds in the name of cultural precepts; the sphere is a fragment of his scheme to settle a family grudge by wiping out the planet Xandar. If Peter and his ornery pals view law and justice with ambivalence, they’re still not the types to make way for Ronan’s plans for further genocide, so they determine to keep the sphere out of his hands, which is easier said than done for a disorganized pack of petty crooks and bruisers.

The results dazzle. There’ a lot of plot here, a lot, but Gunn juggles the rapidly ballooning stakes and threats with casual, comic ease (save for intermittent expository fumbles). Guardians of the Galaxy has setpieces to spare – in particular a pretty great prison escape – but it’s as often hilarious as it is exciting. (More than occasionally, it’s even moving and emotional.) The spectacle increases, going bigger with each scene until we’re treated to an aerial dogfight over a crowded city involving huge fleets of ships; so too do the laughs gain in raucousness. The best gags go to Cooper (though Batista, surprisingly, comes in a very close second), who injects Rocket’s CGI fuzziness with cantankerous brio. But everyone gets in a good chuckle, and nobody gets shorted in the action department. As the film roars toward its climax, each character receives big moments to shine, making the most of the spotlight each time it falls on them.

Yet the biggest star here may be Gunn. This isn’t his first time delving into superhero fare – 2010’s Super is his personal, unconventional take on comic book movies – but it is his premiere venture into territory this massive. Guardians of the Galaxy leans heavily on the charisma of its performers, certainly, but it soars most of all on Gunn’s depth of imagination and singular vision; you will not see a superhero movie that looks (or sounds) quite like this in 2014, and maybe even beyond. Guardians defies Marvel’s house style. By the time the credits roll, you’ll be eager for Gunn to do it again.

5 thoughts on ““Guardians of the Galaxy” Gunns For Greatness”