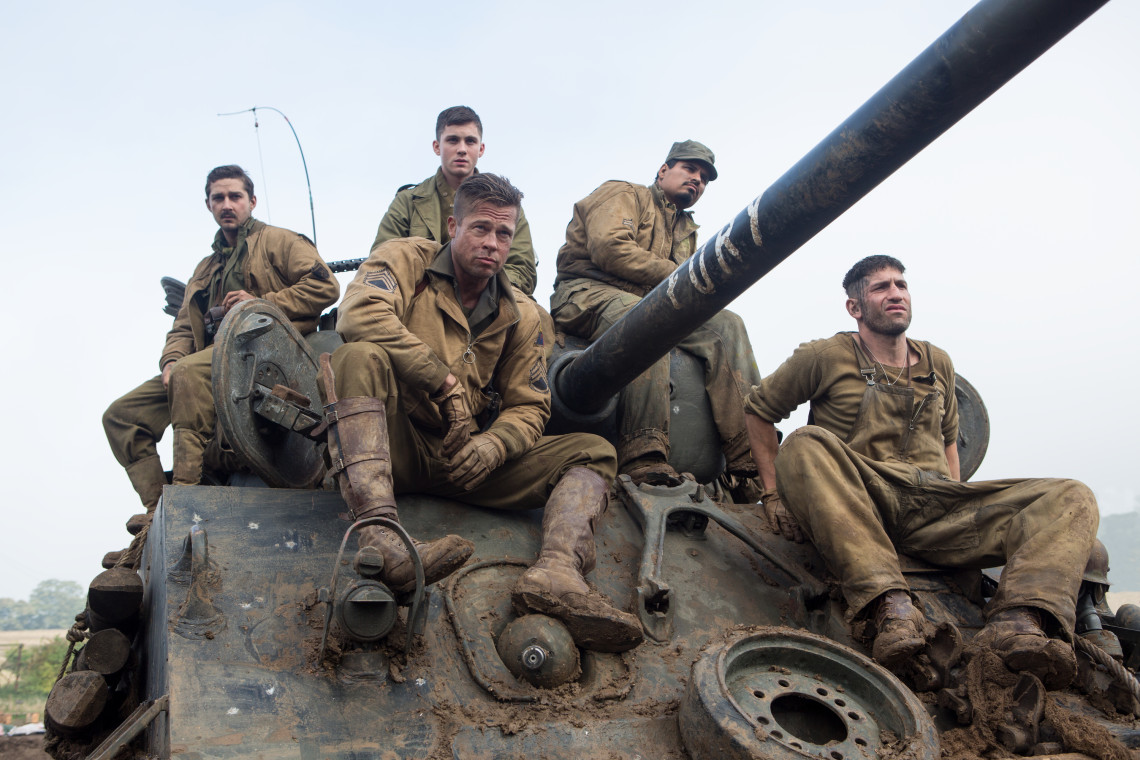 If there’s a throughline to David Ayer’s more personal works, it’s the struggle for fighting men to stay honest while convincing themselves that the horrors they visit upon the enemy are righteous and necessary. He makes films about moral compromise, and specifically about the slow accretion of moments leading up to that compromise. Fury is very much a movie about a gradual descent into hell on Earth, and it pulses with energy and fear like the best of Ayer’s work. You get the sense that this really is his labor of love, and that he’s invested fully in the way his characters define themselves by what they’re ashamed to admit they want to do. But the film’s real power comes from the ugly way it inverts more traditional modern war-film narratives, particularly with its examinations of mercy.

It’s April 1945, and “Fury” is a U.S. Sherman tank inhabited by Sergeant Don “Wardaddy” Collier (Brad Pitt), the pensive and spiritual Boyd “Bible” Swan (Shia LaBeouf), the no-nonsense driver Trini “Gordo” Garcia (Michael Peña), the abrasive Grady “Coon-Ass” Travis (Jon Bernthal), and baby-faced Norman Ellison (Logan Lerman), who’s been in the Army all of 2 weeks when he’s assigned to Fury as a gunner to replace a soldier recently killed. Ayer’s focus here is on the relationships forged by these men in the commission of atrocities. As such, he makes sure that the film starts dark and never lets up. Shot by Roman Vasyanov with an emphasis on grays and browns, Fury is an oppressive trip through limbo: the men regularly drive across misty fields under gray skies, burning tanks the only landmarks to show the passage of time. The first images are dreamlike: Collier as death himself on a pale horse, riding through the muddy remains of a battlefield, dismounting only to shove a knife through the eye of an SS officer who survived the skirmish. There’s a sick beauty to the artifice of the moment’s staging, but Ayer’s using that staginess not to widen the distance between viewer and image, but to pull the viewer into something gruesome and otherworldly. In Fury, the sun never shines.

Over the course of the film, Ayer tightens the bonds that hold these men together until they become chains freely worn and nooses gladly donned. The characters are intentional sketches — the hothead, the rookie, the gruff leader — that wouldn’t feel out of place in any war movie, which is part of what makes Ayer’s film work so well. We know these types, these fragile men, and Ayer’s ability to take them to unexpected places means watching him craft an alternate universe of Hollywood storytelling. This is where Ayer’s focus on the quality of mercy and the horror of being attracted to duty come into play. For instance, in Saving Private Ryan, American soldiers set a German prisoner free, only to have him lead his army right to them. He took the Allies’ mercy and (to them) betrayed it, and his reappearance disillusions the American soldier who comes across him and, retributively, kills him. In Fury, though, the dynamic is reversed. Ayer’s soldiers are the ones who gleefully gun down German troops, and it’s the Germans who show compassion when possible. At one point, a boyish U.S. soldier is hiding from Nazis when he’s discovered by a German soldier as young as he is: the German looks him up and down, studies his empty hands, and leaves him be. Compassion, then, becomes for Ayer not something inherent in one nationality but a force within all men eroded by the nature of war.

Similarly, Pitt’s Collier is both recognizable and horrifying: he’s a tough leader of tough men, but also willing to shoot an unarmed German POW in the back to prove a point about duty. LaBeouf’s Swan is gentler than the typical religious soldier from a war film — there’s no mockery when he recites the Lord’s Prayer with a dying German. Ayer zigs when others would zag, and as a result, Fury feels like its own entity, and not a dressed-up version of something familiar. Pitt and LaBeouf are the best in a strong cast, too: Pitt gives Collier a gruff paternalism that blends nicely with LaBeouf’s portrayal of Swan as a nurturer, and they’re both the most emotionally vulnerable on screen.

There’s an almost tangible sense of oppression and disorientation throughout the film: characters are sent one direction while everyone else goes another, the open sky is just as worrisome as scavenged shelter, and everything is caked in mud and flesh. Steven Price’s queasy score helps, sliding through chords that never know if they want to resolve. Ayer’s got a wonderful touch for evoking the physical, from the squelch of the tank’s tracks in the muck to the cold comfort of the tank’s interior as the men press onward through enemy territory. The tank becomes a holy object, the locus of all physical and emotional relationships. When Norman has a chance to dally with a young German woman, we never see the act; later, though, we see every thrust and parry as Fury and a massive German tank square off in a field, dancing around each other, matching rhythm, Fury eventually firing two rounds right into her carriage and triumphing. The release in Swan’s voice when he says “tank destroyed,” and the slack way the men suddenly shut down as they slump against the walls to process what happened, needs no decoding. Above all, no matter what else, they have their tank, their body.

At one point, a fellow soldier sees Collier ride into town and expresses disbelief that the man has survived for so long. “The devil watches over his own,” Collier shoots back, a grim surrender to the reality of what he’s become but also appropriate for the way Fury feels like it plays out in purgatory. There’s no exit, no end in sight, and no real sense of what’s real or right. There’s just the man in the seat next to you. For these men, this is what they’ll remember, and it’s because they did it together.