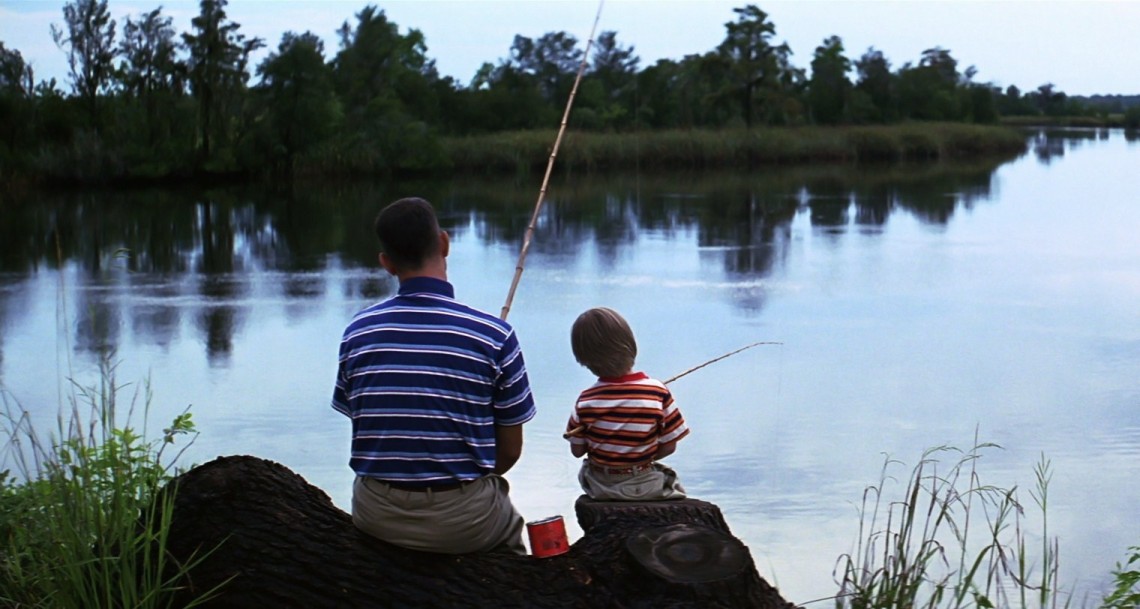 Forrest Gump is never sure of what it is or what it wants to be. Directed by Robert Zemeckis from a script by Eric Roth (reshaping Winston Groom’s novel), the film is an ungainly mix of cheap drama, unearned sentimentality, and questionable humor that asks the audience to patronizingly cherish its mentally challenged protagonist while also regularly laughing at his expense. Here is exactly the kind of pop-culture event befitting a movie designed to string together the Boomers’ greatest hits, and 20 years after its release, it’s being sent back out to IMAX screens for a limited engagement. This is a curious idea for a rerelease, in no small part because Zemeckis’ film doesn’t bear any of the epic imagery or scale one normally associates with 70-foot screens and spine-cracking sound. If anything, Forrest Gump is resolutely plain and visually static, almost as if it were made specially for the VHS era, designed to be seen at home in odd snatches on a weekend afternoon.

The shaggy, vignette-based nature of the plot feels similarly small: the titular Forrest Gump recounts his life in a series of elliptical flashbacks that never get too complicated, from childhood to the Army to quasi-celebrity. Forrest marches drolly along through almost every major pop-culture moment of the 1950s through the 1980s, acting as a dim chorus guiding Boomers through the hallmarks of their lives, with everything playing out about as you’d expect. This starts to approach the core of the film’s problems: namely, that Zemeckis is unsure of how to handle a mix of genres and curiously cruel about the dramatic irony between Forrest’s understanding of the world and our knowledge of his shortcomings. Worst of all, despite a few head fakes toward a heavy-handed spiritual battle between destiny and chance, Zemeckis is unable to sell what’s meant to be the film’s real message, and he comes down on the side of dumb luck every time. There aren’t that many chocolates in a box, after all.

Yet there’s something perversely compelling about Forrest Gump directly related to its propensity for mawkishness. It’s a little like watching a Michael Bay film, or reaching for a sugar-rich snack: the very act of doing it triggers a shame whose first instinctual response is to keep going. It’s spit and polished to a high Hollywood shine, precisely machined to win six Oscars in the spring of 1995, including Best Picture, Best Director for Zemeckis, and Best Actor for Tom Hanks as the title character. It’s surely Hanks’s charm that keeps the film so watchable, even as the act of watching means pitying Forrest and awkwardly marveling at Hanks all at once. The practice of playing mentally challenged characters on film is never a pleasant one to watch or discuss, either, thanks to the inherently gimmicky nature of the performances and the often treacly way in which we’re invited as viewers to pity these people from the start. Tropic Thunder skewered the trend with its depiction of Simple Jack, but I always find myself returning in these instances to Edward Norton’s performance in the otherwise forgettable The Score. In that film, Norton played a thief masquerading as an intellectually disabled man to infiltrate a secure location, and the glib ease with which his character slips into and out of the ruse becomes a deadpan commentary on the way all actors tend to treat these affectations as means to glittery ends. Watching Hanks as Forrest, then, you’re not so much watching him act or create a character but, instead, vamp within a tightly circumscribed area with the goal of becoming a holy fool. You’re supposed to pity Forrest, but you wind up feeling for the stone-faced man behind the buzz cut.

The story is broad but familiar, rooted in the greatest hits of the last semester of American history. As Forrest attends college and goes to Vietnam, his unrequited love, Jenny (Robin Wright), goes through almost every possible stereotypical permutation of someone coming of age in the era, rocketing through a folk phase to eventually become a hippie, a drugged-out disco attendee, a single working mom, and finally a victim of AIDS. It’s possible, and tempting, to read the film as a punishment of lefties, or flower children, or women, or all of the above: Jenny becomes a punching bag at the mercy of the narrative, and she suffers almost her entire life, while Forrest winds up filthy rich and generally makes out OK. But I think that’s ascribing too narrow a view and too purposeful a methodology to a film that’s far too scattered to marshal its resources to accuse anybody of anything except loving too much.

And Forrest doesn’t come out completely unscathed. His best friend dies in his arms in Vietnam, and he’s just self-aware enough to realize the world exists on a plane he’ll never reach. (Indeed, Forrest’s tear-choked question to Jenny about his son’s mental abilities — “Is he smart, or is he …?” — is the film’s most honest and profoundly resonant moment.) This is Zemeckis’ whole problem here: he walks to the edge of insight, of wrestling with something approaching humanity and consequence, and backs away nervously. We see Forrest in pain, but we’re also prodded to chuckle at him when he thinks Apple is “a fruit company” or cluck in some kind of knowing meta-acknowledgement when Forrest winds up telling a bumper-sticker designer that “shit happens.” (Many of the film’s jokes are at the expense of the gap between what’s happening and Gump’s description of it.) He’s given to us as a hero or object of mockery depending on what the scene needs, with pop memory as the ultimate object of reverence. When post-war Forrest finds himself reunited with a paraplegic Lt. Dan Taylor (Gary Sinise), Zemeckis sandwiches maudlin moments of bottle-throwing around a bit showing Forrest and Dan walking through New York streets to the strains of Harry Nilsson’s “Everybody’s Talkin’,” and in case anyone in the back row might miss the joke, Lt. Dan actually pounds a cab’s hood and yells “I’m walkin’ here!” Even when Zemeckis is being slightly more subtle — showing Jenny tumble to the ground outside her childhood home in a pose that mimics Wyeth’s Christina’s World — it’s not clear why he’s doing it. This is pop culture as resurrected monster, serving only to reference its own passing.

Similarly, Zemeckis doesn’t know how to handle certain (well, most) aspects of the civil rights movement that find their way into the film, so moments that might seem to be merely racially inept are actually more about cowardice than ideology. It’s not just telling that we almost never see black faces unless they’re servants or Army grunts; rather, it’s more revealing that, when Forrest watches Vivian Malone Jones and James Hood admitted to his University of Alabama in the presence of the National Guard and a fellow white student refers to the black admittants as “coons” and “n***ers,” Zemeckis never shows this other student’s face. We only get his profile, and his dialogue has the oddly thick quality of badly dubbed audio, as well. Zemeckis can’t even make this no-name extra a pretend racist for 20 seconds; the moment is all about how Forrest picks up Jones’s book when she drops it to hand it back to her. We don’t have to think about what’s really happening because we’re encouraged to retreat into Forrest’s simple world. Must be tough being brothers, etc.

If there’s a legacy to the film, it’s that schizophrenic approach to feel-good, This Is Your Life storytelling. Zemeckis wants us to embrace Gump as an icon, but he also wants us to laugh at him. He wants us to get choked up, but he also wants us to wink at goofy contrivances. He wants us, at any given moment, just to feel a specific feeling, but those feelings aren’t actually connected to each other, and the way Zemeckis veers awkwardly between emotional extremes belies the fact that there’s nothing happening below the surface here. Forrest Gump is fantastically slick and deep-down phony, and it functions precisely to the degree that you acknowledge how queasy you feel for going along with it.