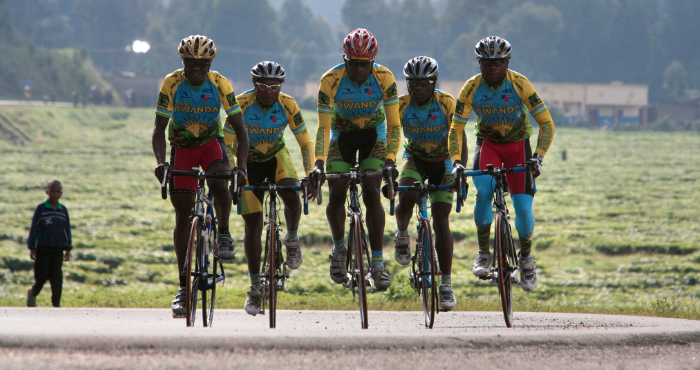 Finishing the Cycle with ‘Rising from Ashes’

For all its speed and excruciating physical effort it requires, there’s an uncommon grace to cycling, which allows human beings to zap in mid-air as if they were insects. Riding a bike offers a fluidity of motion surpassed only by swimming. Movies as different as Breaking Away and Jour de Fete tapped into the exhilaration offered by a high-speed bicycle ride, and now Rising from Ashes, the new documentary by T.C. Johnstone, uses it as a metaphor for rebirth.

What is being reborn is both a human being and a country scarred by genocide. The film, produced and narrated (sparsely but regally) by Forest Whitaker, tells a story of the first national cycling team Rwanda ever had, as it struggles for six years to realize the dream of entering the London Olympics. Trained by the sport’s legend Jock Boyer (the first-ever American to take part in Tour de France), the young members of the team are as determined and optimistic as they are forever marked by the unspeakable atrocities their families suffered during the 1994 civil war.

Boyer is the film’s key presence. His early triumph as a cyclist, as well as the subsequent dark and troubled period (that peaked with imprisonment for sexual misconduct with a minor) are both explored, albeit gradually. Sinewy and monastic in his commitment to athletic excellence, Boyer is honored for his resilience, but also presented as a vulnerable man struggling with his own demons. He can be tough with his team members – a father figure in more ways than one – but his commitment to their success is unquestionable.

The true achievement of the film lies in its structure, which successfully avoids repetition, offering instead a gradual narrative that illuminates past and present alike. As a film about the aftermath of genocide, the film succeeds in presenting the historical background of the Tutsi-Hutu bloodshed, blaming it rightly on the racist divisions introduced in the colonial age. However, Johnstone’s insistence upon fashioning his film into a story of a triumph makes Rising from Ashes a tad too simplistic in its view of Rwanda’s present situation. We don’t get a sense of the country’s contemporary political reality, which makes the film seem myopic and not informative enough.

The movie is mostly gorgeous to look at, courtesy of Rwanda’s russet, hilly dust roads dominating the first half, and a diverse American landscape making its appearance in the second (if anything, the American scenes make you aware of the sheer strangeness of asphalt). The soundtrack fares much worse, with a heavy, excitement-inducing reality-TV beat dominating the sequences of actual suspense and rendering them far too generic for their own good.

By now, the drum-heavy boom-boom rattle is such a tired device, it can signify both the triumph of human spirit and serving a successful soufflé on Chopped – it would be better if documentary filmmakers avoided it altogether. Still, this is an exciting and moving film that honors the tremendous effort by people determined to move on despite having experienced hell on earth. It’s uplifting without being inflated, which is not an easy feat to achieve.