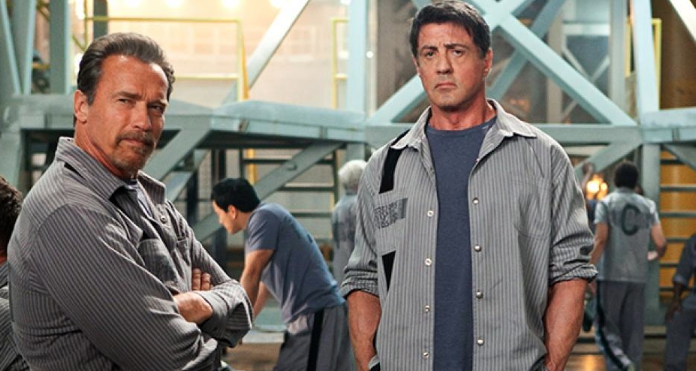 The bruising and clunky Escape Plan runs high on thundering fists and low on stimulating thrills. Featuring two action titans (Sylvester Stallone and Arnold Schwarzenegger) who are now pushing 70, Mikael Håfström’s prison break thriller shows early promise, but results in a forgettable throwback exercise about aged action stars who still show a taste for mischief and upheaval. Though it’s refreshingly slight regarding its meta eye-winking surrounding the career’s of its stars, Escape Plan’s brawler mentality isn’t quite enough; this is essentially a lowest common denominator action outing, but even at its best, there’s not much that charms or excites.

Ray Breslin (Stallone) is the ultimate “Houdini” when it comes to breaking out of prisons. Stallone is again playing another loner who gets by on the thrill of the job. Though it’s a dangerous career, it also pays very well. For a large price, Breslin will regularly inject himself into a maximum-security penitentiary to make sure it’s escape-proof. Following through on his ambitions, Breslin’s latest assignment puts him in tremendous danger as he’s blindsided by a team member and thrust inside an off-the-grid secret prison site run by an eerie and power-hungry warden (Jim Caviezel).

With ties now severed with his team (Amy Ryan and Curtis “50 Cent” Jackson) on the outside, Breslin teams up with resourceful no-nonsense inmate Emil Rottmayer (Schwarzenegger), hoping it will increase their joint bid at freedom. While the gunplay is minimal, Escape Plan’s sense of action is often an undercooked offering of broken bones and beaten faces. While the script is overtly ridiculous, Stallone and Schwarzenegger’s efforts go un-aided during the entire film. Their game to do all the heavy lifting, even Arnold seems to be having a ball here, but Stallone looks bored and unchallenged by the proceedings. Caviezel has proved he’s fit to play a demented not-so-threatening villain before, but even he and his brutish cohort played by Vinnie Jones register as weak threats and roadblocks.

Though Håfström’s lack of kinetic cohesion and formal quality does lower the stakes concerning the film’s lax action, the screenplay by Miles Chapman and Jason Keller is the main reason Escape Plan doesn’t deliver in the entertainment department. The film is overloaded with extreme close-ups of our heroes and their faded faces and juiced-up bodies, and while they always seem to hold interest, Escape Plan is too frail on a narrative level frail to make us care. While an audience will always remain for these legends, this collaboration is a giant thud of missed opportunities and drained potential that even the film’s stars seem to be above.