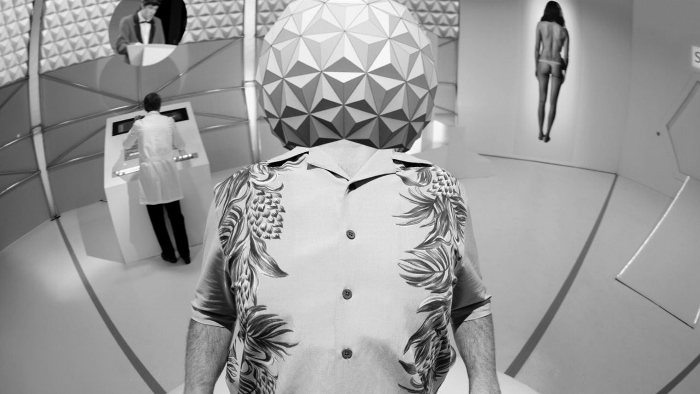 ‘Escape From Tomorrow’: A Hellish Descent Through the Happiest Nightmare on Earth

In 2003, the Big Thunder Mountain Railroad rollercoaster at Disneyland, California derailed and killed a man. I know this because I was there, during one of my countless visits to the park, around the time the ride was closed as a result. I must’ve been around 8 or 9 years old. Mom told me it was because someone died in there. My cousin, also with me at the time, told me it was because the victim in question was decapitated by the ride, during the bit where the train makes a last-minute dip into a tunnel right before it’s about to hit a canyon wall. I believed him back then, naively thinking that the rider in question must’ve been really tall if he could be decapitated by the canyon. Even as a child, despite my love for the place, I was always aware of the darker side of the Happiest Place on Earth.

Now, years later, I sit in a screening room ready to view one of the most talked about films from this year’s Sundance, Escape From Tomorrow, which was shot guerilla style in Walt Disney World. I knew that the film would toy with my nostalgia for the theme park, but I had no idea that the opening scene would be of a man being decapitated by that very canyon wall right before the dip at Big Thunder Mountain Railroad, the rumor I had imagined for years as a child brought to vivid, terrifying life. Shot from the back cart as if you’re riding in the train with the ill-fated passengers, the beheading is shown for a split-second, and the black-and-white cinematography leaves you unsure of whether what you just witnessed was a fountain of blood or something else… but it’s there. And all I could think about as I witnessed this recreation of my childhood nightmares was the Queen of Hearts from Disney’s own Alice in Wonderland madly cackling “Off with her head!”

From that moment on, I knew that Randy Moore’s directorial debut was as much a love-letter to the Magic Kingdom as it was a resentful condemnation. A poisonous valentine, similar to what Lynch accomplished with Hollywood in Mulholland Dr. but with far more raw anger and much less subtlety. Escape From Tomorrow is a crude, messy, totally unpredictable, and incredibly hypnotic piece of indie filmmaking; brazenly passionate in its wish to dissect the very concept of escapism, and utterly frightening in its depiction of amusement gone rotten.

After the euphorically disturbing opening sequence at Big Thunder, we’re introduced to Jim (Roy Abramsohn), who’s just been fired from his job via phone call during the last day of his family vacation at Walt Disney World. Desperate to hide the news from his wife Emily (Elena Schuber) and two kids (Katelynn Rodriguez & Jack Dalton), he continues his vacation hoping the attractions will distract from his worries, only to discover them amplified, as hallucinations, conspiracies, and a duo of scantily-clad, underage French tourists lead him further down a psychotic, mouse-shaped rabbit hole.

Any and all conversation surrounding Escape From Tomorrow will inevitably be overshadowed by talk of its guerilla production and the legal issues that stem from it, but there’s a legitimate reason, in this case. Regardless of subjective quality, Escape From Tomorrow is a gimmick movie in which the gimmick is given real purpose in the narrative. While this remains the story of a man ostensibly going crazy at a theme park, it’s the utilization of Disney iconography that differentiates and elevates the material from a fairly solid psycho-thriller to a downright hellish depiction of the long-term effects corporatized amusement inflicts on the minds of children and adults alike. 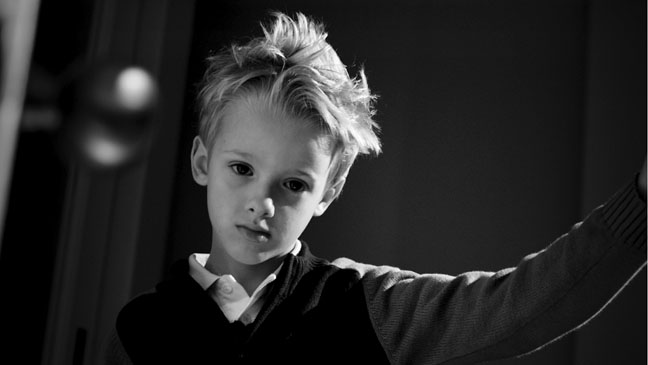 Through equal parts beautiful and sinister black-and-white camerawork by Lucas Lee Graham, and a propelling score by Abel Korzeniowski, Disney World (and Disneyland, which was also visited for shooting) becomes equal parts the same place you knew growing up, and an alien dystopia far removed from our own reality. Audiences who’ve never even been to a Disney theme-park, meanwhile, will shrug their heads trying to parse out just why in the hell any parent would take their child to a place as outlandish and sometimes oppressive as this one. The costumed men and women roaming the park look just as animatronic as the ones on the rides, the caves in Tom Sawyer Island twist and double back often enough to get lost in, and the Epcot sphere looms over all like a round, ball-shaped monolith.

As otherworldly as this place seems, it is totally real and completely ubiquitous to our culture. No need to play coy with allegories or metaphors. Instead, Moore plays it straight and to-the-point by pointing the spotlight at a small, self-contained mini-dystopia that exists in our society. And through that undercurrent of reality in this impossibly surreal landscape, we can understand why the various families seen in the murky backgrounds of the film are so drawn to this fantasyland—because plenty of us have been a part of that crowd too, myself included.

Moore wisely doesn’t resort to cheap-shots, never outright mocking the psychologically broken characters or the crowds that make up the film’s unaware extras for wanting a reprieve from their day-to-day drudgery, no matter how brief it may be. And though there are a few jabs at the corporatism surrounding this fairytale recreation, they’re thankfully not too angsty, and brief enough to display a self-awareness for how obvious such a direction would be for the film.

One can argue that the film would still work if Moore just crafted some fictional theme-park to serve as fodder for the real thing, but that would remove both the film’s straightforward approach and its fascinating subversions of the classic Disney iconography. Without giving too much away, princesses and witches factor into the story in an incisive manner, the film makes great use of actual theme-park rumors (like the aforementioned decapitation and the revelation that those turkey legs may not actually be made of turkey), and a certain scene involving “cat flu” bears new meaning once you remember what Disney’s mascot is. The film takes full advantage of its location in just about every way it possibly can, which works spectacularly in its favor.

Sometimes, the location works almost to the film’s detriment as well. With its guerilla shooting methods come the ever-present danger of its cast and crew being “caught” by Disney authorities. The film gets around this by using green-screen in certain exterior shots, which shouldn’t work on any level, and are certainly distracting, except they manage to only heighten the dissociative atmosphere even further. Moore and co. ultimately recognize the limitations of their production, and manage to use those to their advantage as well.

The performances are perfectly exaggerated for this kind of setting. Roy Abramsohn is over-the-top as the central crazy dad, but with that he carries an affable, all-American father-figure presence that’s easy to relate with even when he’s cranking things to 11, and the same can be said of Schuber as the mother. The two kids can really only alternate between being cute and creepy, but at that they are effective. One of the final scenes involving Jack Dalton as the son Elliot is actually very subtly handled, as his vacant, disquieting smile and doe-like eyes sent shivers down my spine. 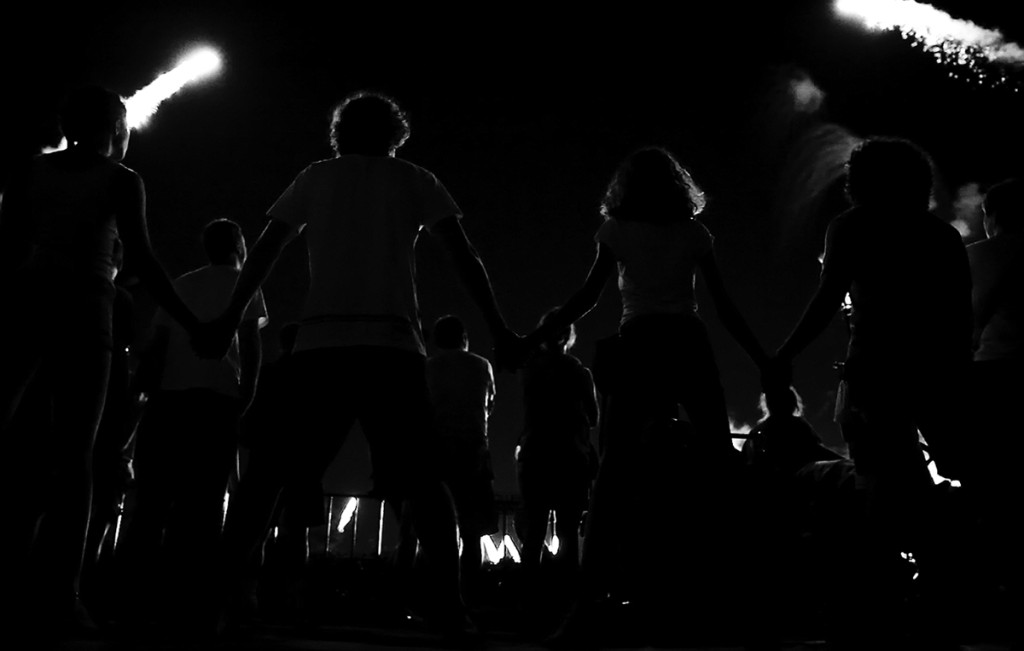 But despite all of Escape From Tomorrow‘s accomplishments, this still feels very much like a first-feature, with all the uncertainty and lack of polish that entails. Namely, the script suffers from amateurish spots. For all the film’s interesting ideas, there’s so much going on at times that not all of them are given room to breathe in its 90-minute runtime. Most notable of which is a scene in which Jim is being experimented on by a mad scientist, which doesn’t have much to do with the main plot, distracts the viewer with needless exposition, and is edited so quickly and haphazardly that it almost feels like the filmmakers want to get over with the scene as much as Jim does.

Yet despite these distracting problems, the film makes up for them through its rich atmosphere and main thematic conceit. While the experience overall can be as subtle as…well, a theme park attraction, there are scenes that display more intelligence than the script lets on. The most telling scene of all was one in which Jim starts vomiting during one of the rides—after copious amounts of alcohol, no less—and Emily, instead of helping her husband, diverts her son’s attention by telling him to keep focusing on the ride.

It’s very clear that the film is specifically about Jim’s escapism, and the psychological baggage that comes with it, but that concept becomes cyclical as his escape ends up affecting his own child, bringing him to retreat from his reality as well. Their escapes are entirely personal, and yet they bleed into one another’s, creating a delusional cycle. And how could it not? It’s an escape that’s shared by millions of people, every day of every year.

Can we really blame Jim and Elliot for wanting a release from their painful realities? Can we really blame Disney for offering a service that delivers just that? Or should we condemn them for offering us a fantasy that will never be real, yet is so close to reality that we feel entitled to our own magic kingdom? In a way, we all deserve some form of escapism, whether it be through art, film, or even theme-parks. But at what cost?

As imperfectly made as Escape From Tomorrow can be, that idea is explored as personally and harrowingly as a film about Walt Disney World can get. The more Escape From Tomorrow lingers in the mind, the more disturbing and fascinating its implications on modern American culture become, and the audacity of its setting elevates it even further.

Who really knows what will happen next time I make my annual visit to the Magic Kingdom? All I know is that I won’t be able to look at the park the same way again… and I’ll be sure to ride Buzz Lightyear first thing.

Escape From Tomorrow will be released on limited release in select Los Angeles & New York theaters and Video On Demand on October 11th.