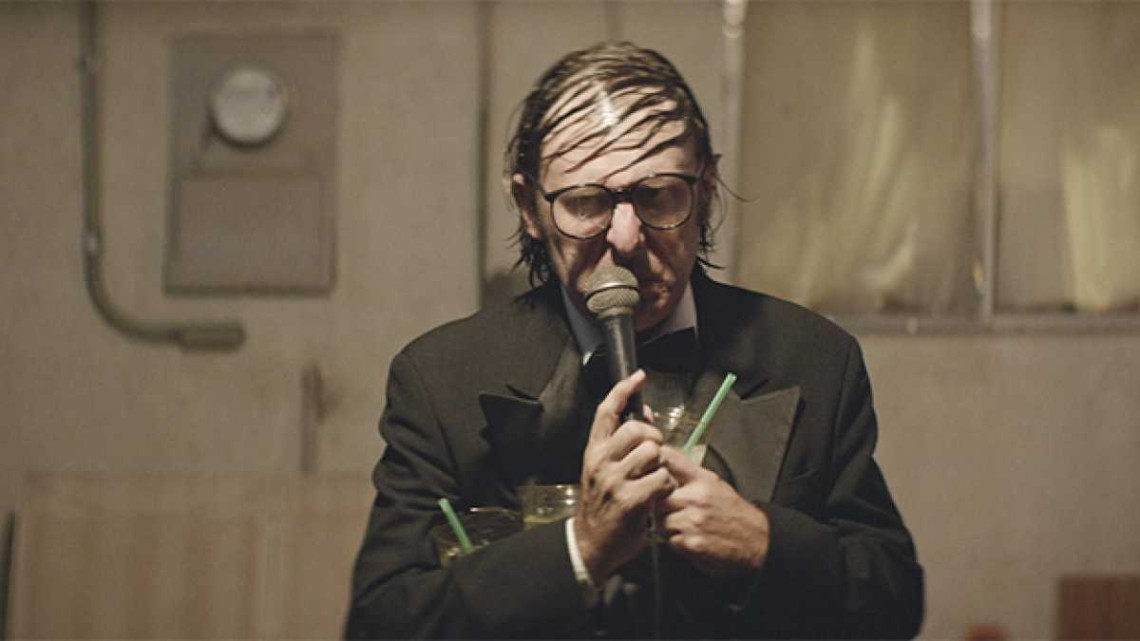 “Entertainment” Is One of the Year’s Best Films

The idea of the sad clown is as old as comedy itself, and yet it’d be too easy to classify Rick Alverson’s new film—which revolves around the existential journey of a standup performer—as just another in the long line of stories about depressed funnymen and the dark lives behind the laughter. Though certainly an expert exploration of a comedian unraveling, Entertainment also conjures up an elegant portrait of a nation lost in a surrealist slipstream, drawing on the iconography of its past and the shell of its present. It’s one of the best American movies of the year.

The film stars Gregg Turkington, who cowrote along with Alverson and Tim Heidecker, though exactly what version of the actor’s persona we’re presented with here remains ambiguous. Turkington plays a character known simply as “The Comedian,” a low-rent jobbing standup who tours and performs as a Tony Clifton-esque shock anti-comic. With his oily combover, bug-eyed glasses, and cheap, ill-fitting suits, he’s of course recognizable as Neil Hamburger, Turkington’s real-life alter-ego who he’s perfected as a grotesque extreme of the bad-taste roast emcee. Hamburger’s routines give the film its comedic ballast, but much of Entertainment finds Turkington out of character as the downbeat man behind the performer.

We first glimpse the Comedian standing in the carcass of a private jet in an airplane graveyard, stripped of its yesteryear glamour and little more than a skeleton. The scene sets the tone for Alverson’s striking tour of a nightmarish California, characterized by seedy nightclubs, bowling alleys, New Age light baths, and garish motel rooms, a dissolute wasteland he punctuates with the oil fields, abandoned gold towns, and orange groves of its industrious past. Hamburger’s abrasive routines are set against Turkington’s lonely motel room interludes, two modes of performance that will eventually dovetail in identity-shattering oblivion. Working from an obnoxious surface, Alverson excavates the soul of his character.

This isn’t entirely new ground for the writer-director, whose oft-misunderstood The Comedy took another meta anti-comic, Tim Heidecker, and confronted the audience with an “unlikable” character he then created an uncomfortable affinity for. Turkington is more sympathetic, with his perpetually forlorn look and sad nocturnal eyes, but the film is working in a similar register of the comic and the grotesque. And while there’s a central existential crisis, Alverson, Heidecker, and Turkington are dabbling in the next-level here: since their star is already an abstraction of reality, the film is free to wander into a wider critique of “entertainment” and, more specifically, a take on the splintering of the self.

Simply calling this satire feels too reductive, however. There’s something ineffable going on in Entertainment, and it moves beyond parodying the bankrupt nature of comedy and into something more surreal. The Comedian’s wanderings across hostile desert vistas have an otherworldly feel, where upturned cars resemble crash-landed spacecraft and oil pumps are creatures pecking away at the terrain. Robert Donne’s eerie score, coupled with these images, suggests comparisons with Nicolas Roeg’s The Man Who Fell To Earth, Turkington a similarly disembodied stranger in a strange land—a man drifting through a world he can only observe through a mask.

Entertainment’s most striking analogue, however, might be Apocalypse Now. Both journey deep into an increasingly absurd heart of darkness populated by strange characters either clinging to some antiquated notion of the past or deformed by their station along the way. John C. Reilly appears as ‘Cousin John,’ a local landowner who talks about “growth potential” like an eternally hopeful new American unable to recognize his delusion; later, Michael Cera shows up as a truckstop drifter who who appears to have lost his mind. A hideously misogynist comedian, meanwhile, feels like the final gatekeeper on the film’s descent into Hell. The horror of the Comedian’s journey reaches its zenith when he’s contracted to perform at a “celebrity” party in the Hollywood Hills for a bunch of creeps (including a cameoing Heidecker) who make Kurtz’s compound seem benign by comparison.

Working in collaboration with DP Lorenzo Hagerman, Alverson’s formal moves are consistently impressive. His widescreen compositions, evoking both early ‘70s New Hollywood road movies and classic Westerns, are finely attuned to the brutal emptiness of the world and its inhabitants. The film’s interiors are often lit with a giallo flair, with blue and pink filters bifurcating enclosed spaces, while elsewhere he conjures a Lynchian nightscape of lost highways, ghostly imagery, and out-of-tune standards bleating from car radios. Donne’s score has an unsettling effect that grows stranger and more suffocating as the film progresses, while passages of imagery— like the Comedian decked out in a bejewelled tux in a prison cell— serve to reinforce the element of nightmare.

Entertainment occasionally threatens to overplay its hand, like a scene which simply has The Comedian bleating “why, why, why!” during a routine that doubles as a giant exclamation mark after the thematic thread. But delivered in Hamburger’s distinct cadences, it becomes hilarious in its absurdity. Rather than dole out another movie about sad white men and their existential crises, Alverson and Turkington wonder what happens when irony and parody turn on themselves. What happens when the meta collapses, and the creation consumes its creator, as happens here?

One of the film’s most compelling threads involves the Comedian obsessing over the telenovelas he’s watching, until they literally swallow him, Poltergeist-style, whole. Irony, entertainment, performance, all get mixed up in the noise and static of the image. These final moments capture the film’s seamless blend of terror and hilarity, as The Comedian is left to cackle hysterically at himself on TV—the great American dream.