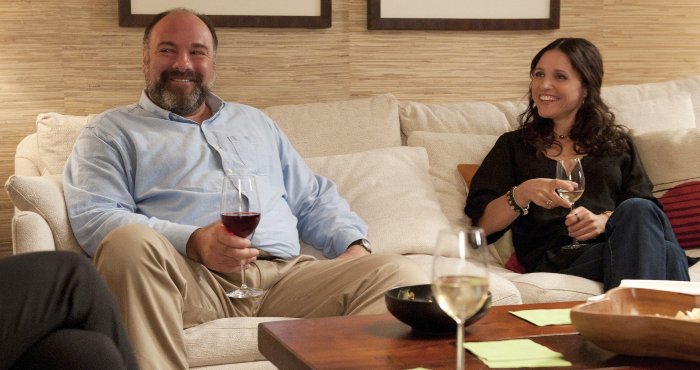 The sheen of middle-class comfort that coats much of Nicole Holofcener’s Enough Said in plastic only calls more attention to the wear in the faces of Eva (Julia Louis-Dreyfus) and Albert (James Gandolfini), two middle-aged divorcés who hit it off at a party over their mutual empty nest syndrome. Their age and unluckiness in love colors all of the pair’s interactions and individual foibles, but not in the facile manner that defines so many pandering attempts to make a film for the “older” crowd.

Rather, having been through the ringer already permits these two people from engaging in an on-screen relationship that occurs the way they do in real-life: not with outlandish meet-cutes and instant sparks but with curiosity, caution, and enough faith in a person to risk sharing a meal with them. Whenever focused solely on Eva and Albert together, Enough Said maintains that muted, naturalistic focus, gradually fleshing out their romance as both come clean about their anxieties and settle into the other’s rhythms that both soothe and grate them.

Quirks like Albert’s proclivity for stirring the onions out of his guacamole or Eva’s years-long semi-commitment to knitting do not define them as people so much as they provide glimpses into the minutiae one notices about someone when a relationship starts to get serious. The two occasionally treat certain touchstones as key events—introducing the other to friends and children, first kisses—but only because people cannot help but compartmentalize and rationalize that way. People made plots out of love well before the movies came along and reduced those plots.

The film falters when it either splits off from the couple to be alone with someone, or the two must mingle with friends. At that point, all the overinflated, typed characters and manufactured drama common to the romcom, heretofore blessedly omitted, come rushing back in. The secondary characters—Eva and Albert’s daughters, Eva’s pampered masseuse clients, and Eva’s warring married friends (Ben Falcone and Toni Colette)—exist only as passive-aggressive, spiteful characters who bring out the worst in the leads’ lingering resentments from their past.

Catherine Keener’s character, a new client of Eva’s who turns out to be Albert’s gossipy ex, somewhat alleviates this issue by giving Eva a direct connection between the more expressive sideshows and her more interior hangups about growing close to someone after having been wounded before, taking a chance to vet her new man to avoid problems down the road.

Nevertheless, Louis-Dreyfus and Gandolfini rescue the film from its dead weight. Louis-Dreyfus adds just the right amount of dysfunction to her performance without turning into a caricature of the obsessive, lonely middle-aged woman desperate for love. If anything, she subtly tweaks a more classically male type, that of the jaded lover who duplicitously tries to dig up what she can on her partner to ensure he meets her idealized standards. But Eva is also a real person, and Louis-Dreyfus sets the entire film’s tone when she callously points out to friends how unattractive she finds Albert the day after they met.

And then, there’s Gandolfini, who, in his penultimate film role, provides yet more evidence that the actor was finally getting to move away from the post-Tony bruisers that had come to define him. Gandolfini’s capacity for rage underpins even his most put-together and believable characters, but in Albert he got his most vulnerable part. Scruffy and slovenly in such a way that his lumbering frame has a kind of magnetism, Gandolfini speaks with unadorned, masculine brusqueness. Even so, he clearly sags under the weight of his unhappy life, and when he says, “I’m too old for that shit” late in the film, he does so with more quiet, humble dignity and bemused acceptance than the overused line has ever displayed.

In its own way, that line contains such reservoirs of unvarnished, unprotected truth it jolts more than any of the actor’s more brutish work, and among the agreeably minor-key pleasures of Enough Said is the devastating sense that we still don’t know what we lost in Gandolfini.