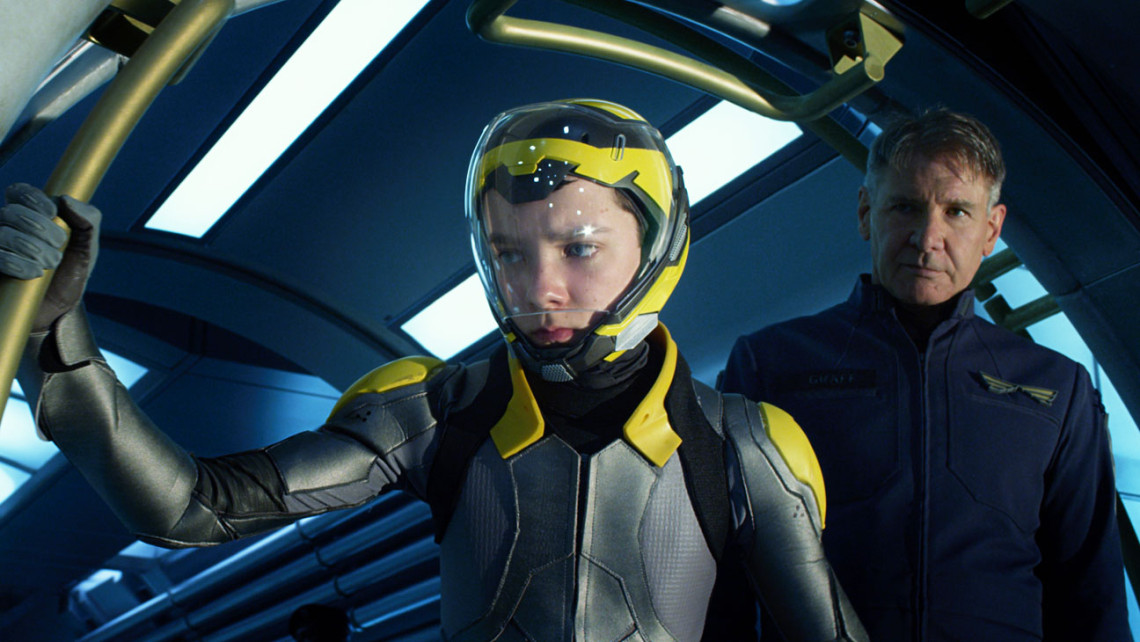 High school English teachers have always told their students that watching movies based on their assigned books would be no substitute for reading them. Historically, this admonition has mostly been true. But I’m reasonably sure that nowadays a student could successfully bullshit their way through a book report or two with the help of modern films that are based young adult novels. Starting with the latter-day Harry Potter movies, the high rule of adaptation holds that “faithfulness” to the source material is to be considered above all else. This isn’t wrongheaded, but it sometimes seems to take precedence over making movies that are good on their own terms. It’s CliffsNotes filmmaking, where the movies feel like little more than abridged visualizations of the books. It happened with Harry Potter, it happened with The Hunger Games, and now it’s happened with Ender’s Game.

This approach certainly pleases fans of these series. They get everything they loved about the books without having to imagine any of it. But it does little for me. There was a lot of potential in the book of The Hunger Games that was never tapped in the movie, and while I didn’t particularly care for the novel Ender’s Game, I thought that someone more interesting than Orson Scott Card could spin the story into something worthwhile. Unfortunately, no one involved in this movie is more interesting than Orson Scott Card (and that’s a really low bar to clear).

Asa Butterfield is the eponymous Ender, playing his eponymous games, which are all in the service of schooling him in military tactics and thought. He’s one of many children being groomed to take command of an interstellar army headed for war with the Formics, an alien race that devastated Earth decades before. Colonel Hyrum Graff (Harrison Ford) believes that Ender has the most potential to lead the fleet, and does all he can to foster that potential. This entails manipulating the boy so that he is constantly isolated from his peers, and seeking to cull the more compassionate parts of his personality. So as Ender progresses through the space station Battle School and beyond, the question is not just whether he can lead, but if he’ll retain his humanity as he does so.

Director Gavin Hood’s script possesses enough pragmatism that it at least cuts the subplot in the book in which Ender’s older siblings use Internet sock puppets to take over the world (seriously). But it still tries to “get in” too much of the book’s plot, which results in a noticeable compression of events. There’s little sense of how much time passes while Ender is in Battle School. The movie has time for the important beats and not much else in between.

It would help if the film had even a modicum of style, but it feels no more than adequately workmanlike on every level of production. The special effects are convincing but not impressive. The music does what it has to while being unmemorable. The cinematography and editing are purely functional. The main action sequences in particular suffer heavily in the wake of Gravity, since they’re also set in a zero-gravity environment but bring not even a hundredth of the visual flair of that film.

There’s a bigger problem with the action, though, and it goes straight back to the source material. This is a story all about war and strategy, but not much knowledge of these subjects is evident in it. Ender is supposed to be a tactical genius, the Hannibal, Napoleon, or Patton of his time. But his allegedly brilliant ideas are never revolutionary. This is a civilian’s picture of war. Ender’s struggles with isolation and guilt feel perfunctory rather than convincing, even though Asa Butterfield is doing his best to make it work. But everything, from the way the kid actors march and salute to the way the adults posture, smacks more of pre-movie boot camp prep work than a quasi-fascistic paranoia state. It’s like Starship Troopers without the irony. There’s nothing that feels like what people really involved in conflict go through, and the movie even fails to pursue a viable look at drone warfare through this angle.

Butterfield is backed up by a young cast that consists of interchangeable actors in interchangeable roles. Hailee Steinfeld plays the most prominent of these, but even she could be dropped without losing much from the plot. The only character with a vital role is Moises Arias, hilariously miscast as a bully to Ender. Arias stands a full head shorter than Butterfield, and in IMAX, the size difference makes Butterfield look positively enormous.

Harrison Ford is at least trying, though Graff does little more than be gruff. Most of his screentime is spent opposite Viola Davis, thanklessly given nothing to do besides constantly tell him, “Don’t do that thing to Ender!” to which he always grimly responds, “No, I must do the thing.” Later, Ben Kingsley shows up with a New Zealand accent, so I guess one could argue he makes an effort.

Ender’s Game is neither particularly good nor bad. It just exists. It is its book, put on the screen without any new thought whatsoever. A seventh grader could watch it and write a passable essay about it. I doubt they’d have much fun with it, though.