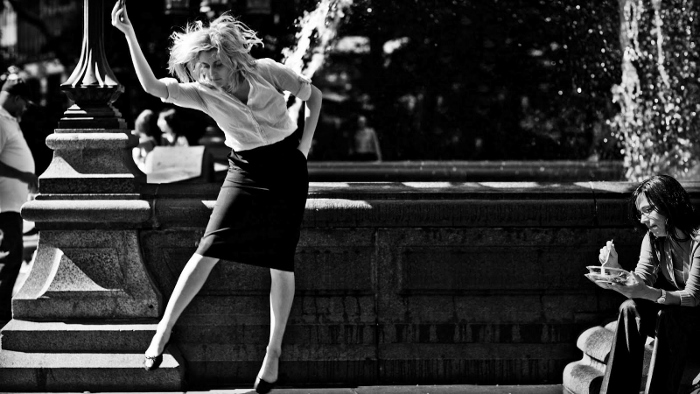 Like seemingly all things about the twentysomethings of this generation, Frances Ha is either going to deeply resonate with you, leave you completely cold, or flat-out infuriate you. Adding more to this polarization is that it’s co-written and directed by Noah Baumbach, known for portraying intentionally bitter, narcissistic, deeply flawed characters that can sometimes fight the audience’s sympathy. By comparison, the titular Frances of his latest feature is by far his most charming creation, but that doesn’t make her a walk in the park either.

Frances, as portrayed here by Baumbach’s co-writer and girlfriend Greta Gerwig, is a 27-year-old dancer who doesn’t really dance much and lives with her best friend Sophie (Mickey Sumner) in New York. Well, she was living with her best friend Sophie before she decided to move in with her boyfriend, leaving Frances without an apartment, forcing her to get her act together. What ensues is Frances’ continued attempts to put her life in order; a feat that reveals itself to be more difficult than her stunted ambitions have indicated.

Even though many who hate Lena Dunham’s HBO show Girls are likely to rag on Frances Ha for very similar reasons, I still believe that they’re very different beasts. While both have the same amount of depth and introspection on twentysomethings wandering aimlessly through their adulthood, Frances Ha is both less acidic and more empathetic toward the struggles of cutting off your ties from entitlement to make a truly honest living.

Gerwig’s Frances is a decidedly more nuanced and likable heroine than Dunham’s Hannah Horvath. She still suffers from the same kind of aimlessness found in Girls and countless “mumblecore” films, but there’s never any pretense going on with her. While many of the characters surrounding Frances are all playing the parts of grown-ups without actually doing anything, she is well-aware of her ambitions, just dancing her way through life and drawing her world with colors that simply don’t exist in her reality. At the same time, however, she knows she has a problem, and genuinely wants to make an effort to get her act together and grow up. Instead of the irony-laden hipsters that are commonly associated with today’s aimless twentysomethings, Frances is an entirely sincere creation, flaws and all.

Greta Gerwig plays (and writes) her wonderfully. She knows how to make this protagonist likeable without sidestepping what makes her deeply flawed in the process. She’s flighty but not entirely irresponsible. Has her own little quirks, yet is never defined by shallow quirkiness. Most of all she’s just generally endearing, giving Frances a radiance and affability that really sells her earnest nature. We manage to sympathize with Frances even when she continually screws up simply because she is the only wholeheartedly unpretentious character who’s trying to make her way.

Baumbach films Frances and her world through a style that wears its references on its sleeve. The most obvious comparison to make, of course, is to Woody Allen’s black-and-white love-letter to New York Manhattan, but the inky, amorously lit cinematography also complements a score that heavily borrows from the films of the French New Wave–a fitting comparison since Frances Ha is more Stolen Kisses than Tiny Furniture, and one that gives the film a timeless feel that knowingly conflicts with its temporary themes.

Perhaps it’s in this sort of reverse-anachronism that Baumbach is stating that TIME Magazine’s so-called “Me” Generation has always been a part of history, and will likely continue on. Some “me”s will be like Frances and actually strive for (and maybe even find) success as a real adult. Others will simply wander the art museums of New York like ghosts by the time they reach thirty. Either way, it isn’t something exclusive to this generation, which is a point that is conveyed very subtly and gracefully.

Also, it really is an enjoyable 90 minutes. Even without Gerwig’s stand-out performance, the dialogue is witty (though not quite as brutal as Baumbach’s previous offerings, which may disappoint some), it’s deftly humorous, and filled with an honesty that manages to be sweet without being saccharine and wrenching without being devastating. Frances Ha is a film of many small surprises, but they contain big, satisfying rewards. 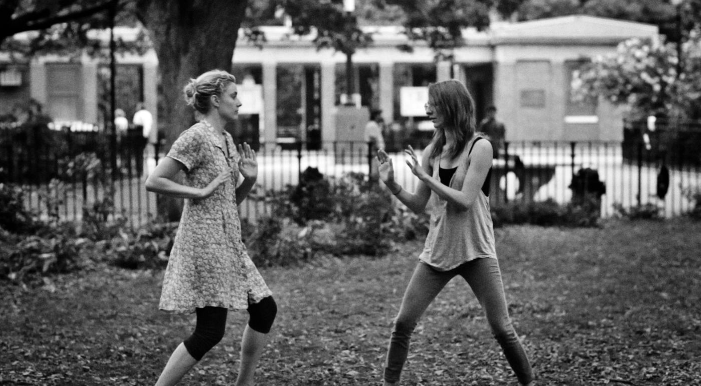 Originally published here on May 30th.

The opening credits of Noah Baumbach’s last feature, 2010’s Greenberg, play over lingering shots of the film’s co-star Greta Gerwig as she drives around Los Angeles to the tune of Steve Miller Band’s “Jet Airliner”. The shot is unbroken, in profile and close up. It’s a revealing consumption of screen time on behalf of the director, devoting about two minutes to this particular face. Gerwig’s character in that film, Florence, isn’t headed anywhere relevant to the audience. By all appearances, she’s just driving. Baumbach’s insistence that our eyes be filled with this actress for so long – and for no apparent reason – is evidence of a blossoming infatuation with his current girlfriend that the writer-director can’t help sharing with his audience.

His new film Frances Ha is essentially an extension of that sequence. It’s 86 minutes of what could alternately be titled “Greta Gerwig Doin’ Thangs”. She runs, she takes a bath, she does laundry. She smokes and eats and whines about not having any money. For those already familiar with Gerwig (Hannah Takes the Stairs, Damsels in Distress, Arthur), enjoyment of Frances Ha is pre-determined. For those still unfamiliar, the film is an attempt to reel in all of whom Greenberg failed to hook.

Frances is a dance company apprentice in her mid-20s living in New York City with best friend Sophie (Mickey Sumner, Sting’s daughter). Their inseparability appears to be shatterproof until the day Sophie casually breaks the news that she’s moving in with her boyfriend. This unleashes the uncouth Frances aimlessly unto the world as she mildly embarrasses herself and makes a few objectionable decisions in the midst of trying to grow up a little.

It’s hard to accept that a movie this wafery could come from Baumbach, the filmmaker who offered up such vicious family dissections as Kicking and Screaming, The Squid and the Whale and Margot at the Wedding. There’s none of his prior bite or wit here as he and Gerwig (who co-wrote the script with Baumbach) mine cheap giggles from sitcom-level beats such as the one in which Frances, after hearing some distressing news, pours a sizable glass of wine.

Most of the characters that encounter Frances are entitled twentysomething loafers who never have anything interesting to say. They don’t even have anything interestingly boring to say. Their conversations are all pat, recycled swill from writers of far less caliber. They come off as pint-sized imitators of the intellectuals from Woody Allen’s Manhattan or even from Baumbach’s earlier features. But their pompous smarm isn’t parodied (as in Woody’s film) or scrutinized as an antithesis to emotional stuntedness (as in Baumbach’s). They’re just idly flapping their gums in yet another tiresome account of quarter-life plight. The film truly is a testament to how little the 43-year-old Baumbach is concerned with producing anything other than an excuse to fill the frame with Gerwig’s pouty face.

Shot romantically in black-and-white and embracing a frolicsome spirit, Frances Ha is clearly high on French New Wave fumes and a director-star relationship reminiscent of the romance between Jean-Luc Godard and Anna Karina. While Gerwig’s appeal is arguably all surface, Karina’s unearthly beauty gave way to an acute self-deprecating playfulness that made it impossible not to fall for her the way Godard inevitably did. Their many projects together were hardly one-note, but gleeful creative flourishes. Likewise Ingmar Bergman’s 1953 Summer with Monika featured the then object of his affection, Harriet Andersson, in a fiercely unlikable role that celebrated her spunk and dangerous unpredictability rather than simply settling on reveling in the contours of her face.

In Greenberg and now Frances Ha, Gerwig is being peddled as likable enough on shallow quirks alone. Character depth and momentum are forsaken in lieu of increasingly insipid banter and montage after mundane montage. The closest we get to character definition is during a brief sojourn to Sacramento where Frances visits her parents and, presumably, old friends. I say “presumably” because the entire interlude is reduced to yet another montage. She returns to New York City where (ostensibly) there are no consequences. Her poor decisions do nothing but prolong the film’s jarringly tidy ending which, at under 90 minutes, is a pretty remarkable feat.

Now I don’t wish heartbreak on anyone. But if Frances Ha is a love letter from Baumbach, a filmmaker who has always been most fascinating when plumbing the darkest recesses of human desires and failures, imagine what his break-up letter would look like.