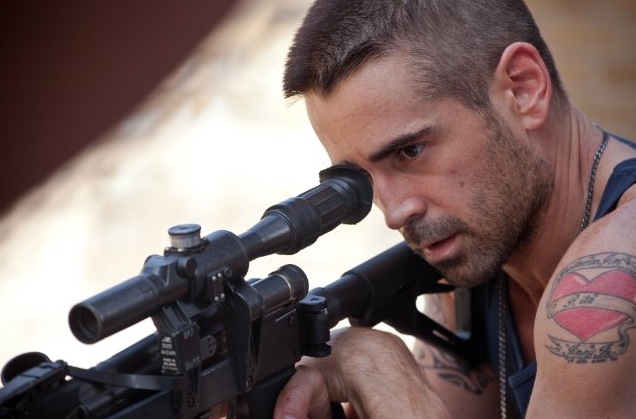 Dead Man Down, the new directorial effort from Niels Arden Oplev, desperately tries to deliver the pleasures of both a noirish thriller and an action bonanza. Unfortunately, it fails at both. Some slick cinematography and a game cast are wasted, as you feel the story plod through each laborious plot point without any real impact. It’s not terrible at character building, but its inability to maintain a steady tone causes a mental checkout in the audience. Plus, it’s so damn familiar: the biggest twist that this film delivers is its utter refusal to provide us with a twist. We get two straight-forward characters, a straight-forward revenge plot, and a fractured sense of what the film would like to be. Why does a film like Dead Man Down exist? It’s too dark to make money, yet it’s too unoriginal and incoherent to be art. It gives us no real themes to marinate upon, yet it gives us very little memorable action in which to revel. It’s simply a mish-mosh and a shame. Dead Man Down never had a chance to get up in the first place.

Victor (Colin Farrell) works for Alphonse (Terrence Howard), a crime lord in New York City. Early on, we see Victor save Alphonse in a shootout– Victor becomes the only man Alphonse trusts. However, we find out that Victor is actually in deep cover unfolding a personal vendetta, involving torture, psychological torment, and clues involving photo cutouts, the way all good personal vendettas do. Unfortunately, Beatrice (Noomi Rapace), Victor’s cute neighbor from the apartment in the building across from his, witnesses Victor committing a murder. She blackmails him into helping her: she wants Victor to kill the drunk driver who hit her, permanently disfiguring her face– her life is ruined, because although she’s obviously gorgeous, a few scars on her face have her labeled “MONSTER” by the neighborhood kids, who throw rocks at her and write “MONSTER” on her apartment door in big letters (these must’ve been the kids from that Bully documentary I kept hearing about last year). As Victor’s plan comes closer to completion, he grows closer to Beatrice. Will he have a change of heart?

I’m a Colin Farrell fan, as he’s given primarily strong performances since the Alexander fiasco, and he does a fine job carrying the film. He could be a credible action hero, or he could be a credible noir hero… but the script requires him to be two different people in concurrent scenes, which, as one would predict, is a problem. Noomi Rapace does okay with a one-note character with no real life of her own: she adorns midriff-baring tops, she cries when she looks in the mirror, and she sells her character’s randomly shifting motivation to the best of her abilities. She really is only present to serve as the obvious counterpart to Farrell: she’s damaged on the outside, but he is on the inside, et cetera. Actors like Dominic Cooper and Isabelle Huppert do well with the nothing they’re given, and Armand Assante is completely awesome in a brief scene (God, I’d kill to see a version of this film with Assante in Farrell’s role). Finally, Terrence Howard is acting for his life in this film: he says he thinks the Iron Man fracas ruined his career, and he’s working hard enough here to show how much he means it. It’s fun to watch him be the heavy, even if his character’s eventual conclusion is horribly anti-climactic.

The problem isn’t the actors, who are trying. The problem certainly isn’t the visuals either: several scenes are hypnotic and stylish, even if some of the action is a bit too frenetically edited. Such is the dueling natures of this film: some scenes are slow boils, all about chemistry and slow deliberate visual patterns, while other scenes play out like an underworld Bourne Identity. Individual scenes in both approaches work. Some of Farrell and Rapace’s interplay is strong and mysterious, and certainly a showdown between Farrell and a wildly intimidating Howard works beautifully. A sequence in which Farrell assassinates a few key thugs and escapes oncoming adversaries in an apartment complex also unfolds well. However, none of this sticks, because the film… my initial inclination is to say it’s doing too much. Yet it’s not one of those ambitious films that tries to do too much; it’s the opposite. It feels neither style presented straight-forward will hold enough interest, so it shoots two totally different films and cross-cuts them at random. It’s the laziest attempt to make a film more complex imaginable. Such a pity– even with no twists or originality, either an action film or a noir with this cast could absolutely work, especially with this cinematographer shooting them so lovingly. Instead of getting a movie, we get moments in which we can ponder what Dead Man Down could have been.