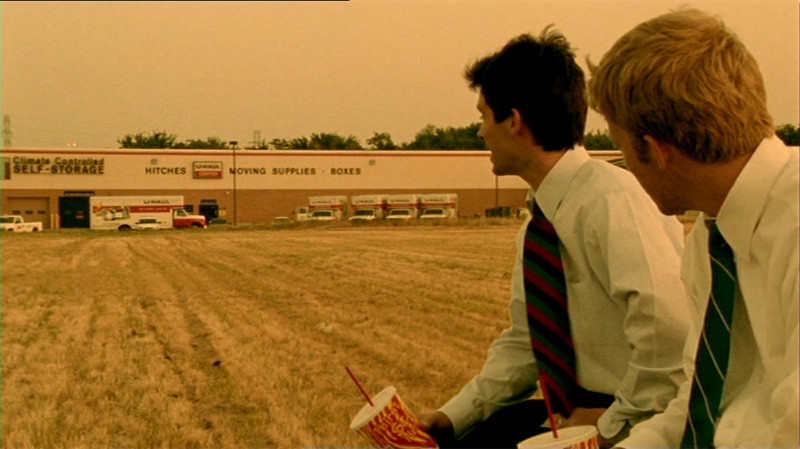 Days of Future Past: Looking Back at Shane Carruth’s “Primer” After 10 Years

When Primer was released in 2004, Shane Carruth—the film’s writer, director, producer, composer, editor, and one of its two main actors—was barely past 30, and he’d spent a couple of years assembling the film on his laptop for a final production cost of about $7,000. This modest production eventually won the Grand Jury Prize at that year’s Sundance Film Festival before receiving a quiet theatrical run and a second life on home video as a cult object. But Primer the Film is more than just Primer the Indie Artifact. What matters is not that Carruth was tying his production together with little more than string and a prayer, but that the film looks so polished and confident, and that its homegrown aesthetic directly complements the emotions and intent of the narrative. Ten years later, Primer is still a perceptive, inventive movie, one that somehow found untilled ground in a field that’s been plowed over for decades. Carruth’s major advantage is in using narrative structure to place the viewer in the role of the observer, not the traveler. We think we’re setting off on a journey, only to find we’ve been kidnapped.

Primer thrusts viewers into a jargon-heavy, ordinary-looking world of engineers—Aaron (Carruth) and Abe (David Sullivan)—who tinker with inventions in their spare time and who accidentally wind up creating a box that’s capable of putting an object through a powerful time loop. Enthralled by their discovery, Aaron and Abe realize it would be possible to use the device to travel into the past and construct human-sized versions of the box. During this arc of discovery and experimentation, Carruth allows his characters time and space to think about what they’re doing, and to react with the kind of believable caution and confusion that any of us probably would exhibit in the same spot. Carruth isn’t just interested in plot, but also in how his characters experience it, and he shows remarkable patience in his willingness to let Aaron and Abe stumble blindly with each small step as they realize what they can accomplish. 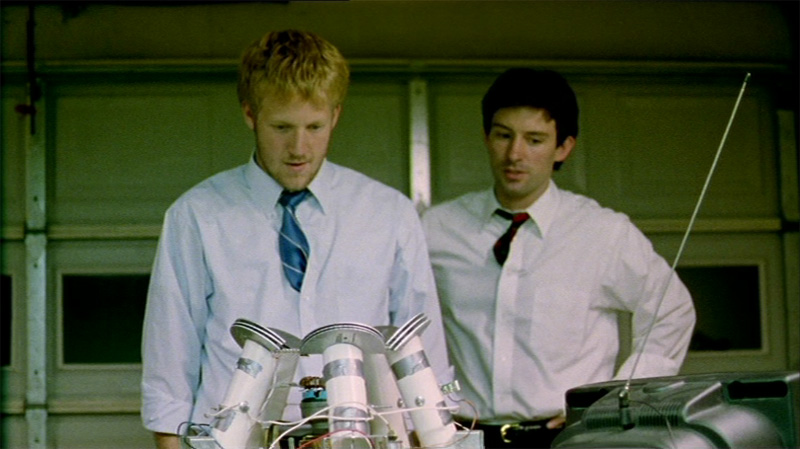 Eventually, they use the box to travel several hours into the past and relive a portion of a day, doing the first thing that would come to anyone’s mind: try to make money. After spending a day watching the stock market, they travel back to that morning and make some canny investments. They tell themselves that this is both non-disruptive (they aren’t trying to change major historical events) and totally justifiable (they get to make a little extra dough without hurting anyone), two conclusions that are debatable at best. Carruth’s main characters are a far cry from the naive heroes of Back to the Future, both of whom just want to make the world a little better; rather, they’re two normal men who, when presented with the opportunity to make easy money, grab it with both hands.

Soon enough, though, they start to make mistakes, as when Aaron takes his cell phone back through time with him and receives a call, leaving the men to wonder how that affected the other “version” of Aaron, also living through that day. This is where Carruth starts to really cook, too. His budgetary limitations mesh perfectly with his m.o. as a filmmaker, as every turn of the screw feels both monumental—since these events are changing the fabric of reality—and mundane—since no one other than two forgettable guys in the suburbs knows what’s happening. The world-changing events around Aaron and Abe play out in humdrum tract homes and blank apartments, all captured on Super 16 with a keen eye for casual framing. But it’s when things inevitably start to go wrong that Carruth finally brings genuine horror to his story. People start showing up in odd places, and it becomes clear that some future versions of Aaron and Abe have come back in time and created ripples that “our” Aaron and Abe don’t understand. And how could they? They haven’t gotten there yet. Right now, in the present, they can only try to puzzle out what their future selves are doing. This sense of dislocation Carruth creates is what makes Primer as emotionally affecting as it is intellectually challenging.

It is also, strangely, an approach we don’t often see in movies. Some time-travel films are presented as fantasies (the aforementioned Back to the Future), while others are deterministic nightmares (12 Monkeys), but they almost always keep the viewer connected to the central time traveler(s). In Primer, though, we experience the damaging and potentially unstoppable side effects of time travel as helpless observers, as clueless about the cause of these things as the characters we’ve been following this whole time. No one had made anything like it before—and, despite the stir it caused in 2004, no one has tried to imitate it since. Not because filmmakers don’t have the ability to do so: This summer’s time-travel action-adventure Edge of Tomorrow had a budget more than 25,000 times that of Primer, so the money’s there to be spent. Rather, it’s because Primer is one of the only films about the subject to honestly consider the disturbing implications of the act. To acknowledge the ease with which we could destroy our lives would mean owning up to the fact that some fantasies are best left unattained. Even with the ability to go back and fix their mistakes, Aaron and Abe never get it right. Better instead to travel through time the way everyone else does: forward, second by second.

2 thoughts on “Days of Future Past: Looking Back at Shane Carruth’s “Primer” After 10 Years”