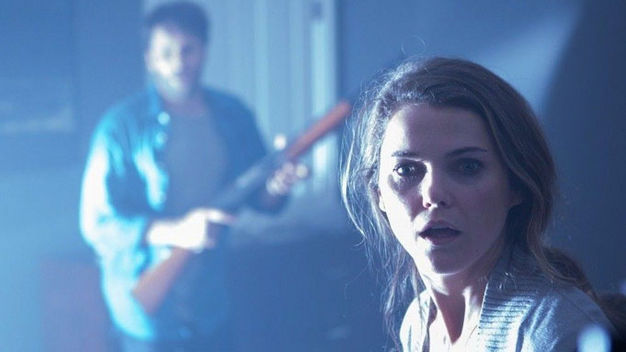 Dark Skies Is Better Than You Thought It Would Be

Dark Skies has everything going against it. It’s directed by Scott Stewart–who’s responsible for the awful duds Legion and Priest–, it’s another creepy-house horror movie in an era that’s littered with Paranormal Activitys and Sinisters, the trailer was rife with unintentionally funny moments, and what’s more, the studio refused to screen it for critics, leading to some hilarious and problematic attempts at screening it.

Everything was already in place: Dark Skies wasn’t going to be a good movie. Hell, I almost didn’t even review it. But thankfully, I gave it a chance, and I was more than pleasantly surprised. Dark Skies is a very good little horror film that has all the right ingredients in place and just succeeds at executing them as well as humanly possible. Much like last year’s Sinister, it gets by its own cliches through the strength of its execution alone. Dark Skies may not be a revelatory experience, but as a pure exercise in genre filmmaking, it excels.

The basic premise is that it’s your typical haunted house chiller with a family-dynamic a la Poltergeist, only with one unique twist: Replace the ghosts with aliens. Things going bump in the night? Aliens. Mysterious markings on random family members? Aliens. Possessions? Aliens. It’s like someone had a random haunted house script and gave it to Giorgio A. Tsoukalos for proofing.

Dark Skies doesn’t really do much that other films of its ilk have done before, but it does it with a grace and eeriness that I wasn’t expecting out of Scott Stewart based on his previous two films. The film’s actually very slow-building, placing more of an emphasis on the mundanity of this family’s lives and how all of that is crushed by the appearance of the beings from beyond, rather than the jump scares one would typically expect from this sort of material.

Even better: The cast is all A-grade. Keri Russell continues to impress after her recent turn in FX’s The Americans in a generic role that she brings a surplus of personality to, while Josh Hamilton gets to shine as the co-lead after a long list of minor supporting roles. Even Dakoto Goyo (Real Steel) as their oldest son manages to impress. The only weak spot in the cast is Kadan Rockett as the youngest son. He’s certainly not as awful as most child actors, but he doesn’t provide anything particularly noteworthy either. He’s at his best when playing cutesy and innocent, but doesn’t succeed at being creepy. Regardless, everyone else more than makes up for his minuscule weaknesses.

Each of the family members were likable and relatable, and while they represent some overused Hollywood archetypes (the dad is under constant stress because he’s on the cusp of getting a big promotion, the mother is having her own difficulties balancing her own job as a real-estate agent and as a stay-at-home mom, etc.) the excellent cast brought them to life just enough to give them a semblance of humanity. Their interactions felt mostly natural and smart, sometimes even subverting the expectations of other, dumber families in these kinds of movies. 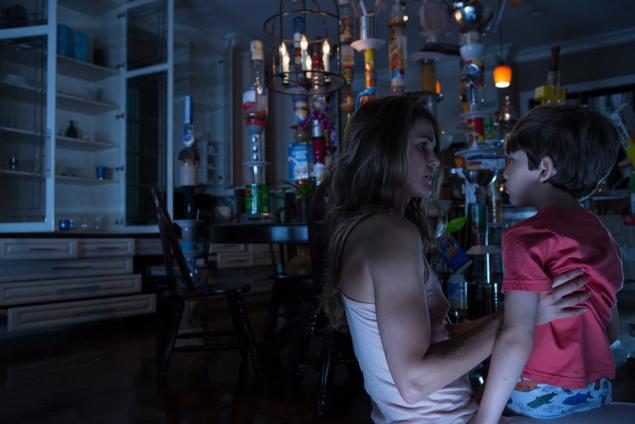 The real standout is J.K. Simmons, who’s given the thankless role of the exposition-spouting mentor who knows anything and everything about the menace the family’s confronting, yet he elevates it in all the best ways. He brings a sense of weariness, experience, and pathos to what could’ve otherwise been a cooky, whacked-out character (As they’re so often portrayed as), and he spouts exposition like he knows all about it. Even the dialogue is well-written for this kind of scene, with the best line regarding how long the extraterrestrial beings have been among us riffing on the classic “Nothing is inevitable but death and taxes” quote, and Simmons’s delivery nails it even further. While this scene runs a tad too long, Simmons brings weight to what could’ve been a generic encounter that may have threatened to halt the movie’s otherwise smart pacing.

Now as someone who values atmosphere and creepiness over the actual scares, Dark Skies does a fantastic job at building its world and atmosphere and letting everything gently crawl down the viewer’s skin. The sound-design is very excellent, with discordant drones and hums adding a unique, sci-fi flavored kind of menace that helps distinguish itself from the pack. Plus, the film has some wonderfully creepy imagery that I dare not give away, but the movie is very good at providing old-fashioned chills over typical jump-scares, to say the least.

What I wasn’t expecting from the film, however, were some Spielbergian flares. The Poltergeist comparison bears more weight than you’d initially think. Not only are the oddly stacked household items and creepy kids prevalent, but there’s a very strong family dynamic and a few scenes meant to evoke childlike wonder. One scene in particular with the eldest son Jesse riding his bike in the middle of the night rivaled the Spielberg homage-ing that JJ Abrams attempted in Super 8–arguably more successfully considering it never immediately feels like blatant homage until retrospect.

Even the opening credits montage seems to be communicating an emphasis on the traditional American family, with warm, sunny shots of children playing and families having barbecues set against the backdrop of quite possibly the whitest suburban neighborhood imaginable. The climax of the film is even set during the crackles and pops of the fireworks of Independence Day.

But the family dynamic also has just as much importance as a thematic undercurrent as it does a concrete plot mechanism. Like Sinister before it, the beings menacing the family (which we thankfully never get a good look at, considering the generic designs and dodgy CG) seem to reflect familial issues and problems, which becomes increasingly apparent when Simmons’s character off-handedly mentions that the only way to get rid of the aliens is to keep fighting them until they stop coming back, and even that isn’t a guarantee that they’ll be forever safe. It may not have the psychological complexity of Take Shelter, but it’s well-thought out and poignant enough to have an impact.

Perhaps that’s why the aliens do manage to feel that menacing, in spite of their cliche’d design. They’re associated with real-life issues rather than supernatural ones–real-life issues that are arguably scarier than the supernatural ones, and their motives are ambiguous enough that we project them directly onto their stupid-looking, elongated heads.

And all of a sudden, that Arthur C.Clarke quote overlaid at the beginning of the film makes its own kind of sense.