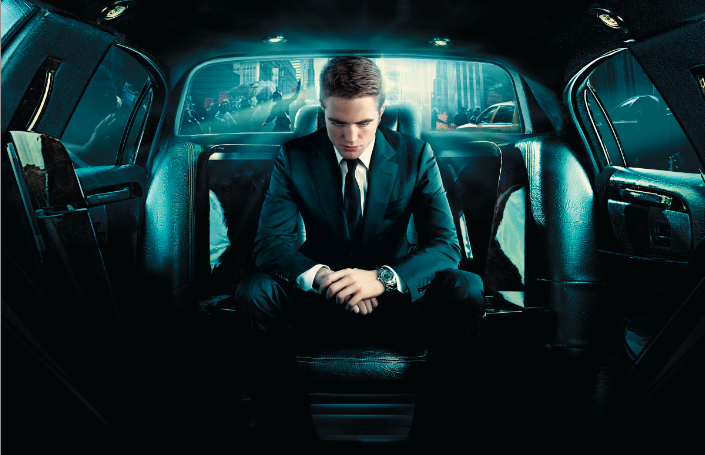 Out on DVD this week is David Cronenberg’s latest film Cosmopolis, an unrelenting commentary on contemporary capitalism, and the emotionally inert individuals that run the system.

Working out of an opulent, white stretch limo, Eric Packer (Robert Pattinson) is a 28-year-old “filthy rich” assets manager whose goal of the day is to receive a clean haircut. Unfortunately, the President is in town, causing massive traffic. This sluggish movement on the streets enables Eric to meet with his mathematically calcuating co-workers, a doctor who pays daily house (or limo, as it were) calls, his newlywed wife, and an assortment of other characters that speak in abstract prose and have sex with Eric — sometimes simultaneously. Added onto the already hectic day are numerous death threats on Packer’s life and reckless anarchists claiming rats will be the new currency.

Describing what transpires in Cosmopolis is just about on par with attempting to understand it. Complex, cryptic, and distant, Cronenberg’s slice of unparalled strangeness (and borderline pervertedness) rejects sentiment or human decency. It’s an unearthly piece of brilliantly staged and shot filmmaking ostensibly set in New York City. Though, you wouldn’t know it’s the city that never sleeps if Eric didn’t mention it in conversation with his wife, Elise (Sarah Gadon).

Adapted from Don DeLillo’s novel, the discussions in Cosmopolis aren’t like the ones you and I have. Sentence structure has been replaced by philosophical jargon, non-sequiturs, and an English language that has never sounded more foreign. The performers do what they can with the source material, but Cosmopolis is an arduous film to listen to, let alone comprehend.

Beyond the usual craziness abound, something unexpected occurs in Cosmopolis: Robert Pattinson demonstrates that he actually does have, well, um, talent. While nothing tops the self-deprecating interviews in which Pattinson makes fun of himself and the whole asinine Twilight franchise, his role here as a billionaire genius, spouting off algorithms and waxing ponderously on the purpose of life, may just be the beginning of his career as an actual actor. The rest of the cast (chiefly Juliette Binoche as Packer’s art dealer, Kevin Durand as his bodyguard, and Paul Giamatti as a disgruntled retired employee) matches Pattinson’s unflinching intensity.

That same intensity exuded from the actors runs through the dark, amoral veins of Cosmopolis. Even when the film appears to be spiraling out of control, a meticulous direction operates like clockwork. The sense of pacing and atmosphere displayed is a sign of a true auteur – an artist behind the camera that has a story to tell, and knows exactly how he wants to tell it. Visually and intellectually, Cronenberg tells that narrative beautifully. Emotionally, however, it fails time and time again to resonate. Perhaps this is because in the place of a heart, Cosmopolis has a dollar sign.

Through the film’s 109-minute bizarro odyssey, what comes through is Cronenberg’s portrait of civilization; or, the lack of civilized people. Cosmopolis depicts present society – one (at least in the context of the film) on the brink of economic disaster and social uprise. While it’s easy to write off Cosmopolis as artful silliness drenched in its own ostentatious aesthetic and elevated lexicon, Cronenberg may be a bit more prophetic than we’d like him to be.