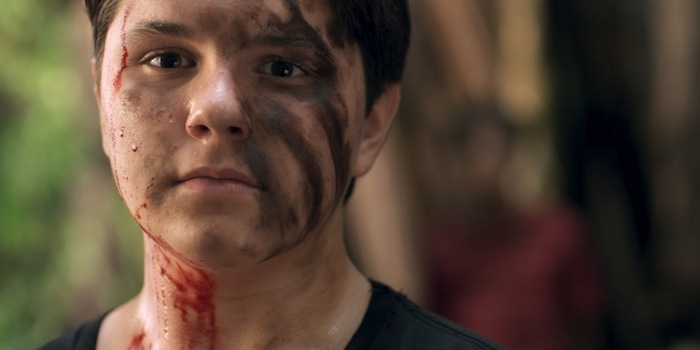 Childhood is Hell in ‘I Declare War’

Movies about childhood are a crapshoot. They can easily fall into cloying nostalgia or cutesiness. It’s easy for adult filmmakers to forget how almost alien the prepubescent ways of thinking are. To a kid, time passes more slowly, and the small things in life are what are important. It’s a strange world where emotions are all mixed up. A lot of movies either make kids into miniature adults or overgrown toddlers. But I Declare War gets it. The movie totally gets what being a kid is like, and at the same time delivers a legitimately exciting action film.

The story is a game of capture-the-flag between two groups of kids. One side is led by P.K., a pint-sized war enthusiast with a precocious gift for strategy. His army includes his best friend Kwon, the intense Kenney, the gentle “chaplain” Altar Boy, and Caleb, a “tracker” complete with a dog partner. The other team is led by Quinn, who’s besotted with Jess, the sole female in the game, and also includes spazzy psycho Skinner, who has nothing but contempt for the rigid rules the other children hold sacred.

The kids traipse around a small forest, searching for the opposing team’s base and toting toys and sticks as if they are guns. Except, to their eyes, and thus the eyes of the audience, they really are guns. In a move sure to cause an epidemic of pearl-clutching if this movie ever reaches a wider audience, the action in this movie consists of young people firing what look like real weapons at one another. But it’s all the heightened imagination of the kids, so it never becomes disturbing. Grenades explode and trees are flayed by artillery, but there’s never any blood. It reflects the mindset of media-soaked brains that only have half a grasp of what actual violence is like.

What’s hilarious is that the battle scenes are more involving and energizing than those in a good portion of modern, “real” war movies. The camera eye is always steady, the combat never feels samey, and the kids bring a level of inventiveness to their maneuvers that makes it a blast to watch. For example, when a grenade comes his way, one quick-witted kid catches it in his cap and lobs it back at his opponent. Not only that, but this is the first war movie I can remember in a while where the combatants employ actual tactics. There are reasons behind every move that each side makes, and every encounter actually means something.

All of this means that a premise that doesn’t seem like it could sustain more than a short film manages to survive a feature length. More important in that area, though, is that each of the kids, even the ones who “die” (i.e. get hit with a paint balloon and thus must go home) early on, feel fully fleshed out. All of the young performers are perfectly natural, and every character gets a moment of focus. The most true thing in this film is how the moves in the game tie into the emotional swings of the kids. Petty jealousies and hurts that will probably be forgotten come the following day seem monumental in these moments. This isn’t a “coming of age” movie. It’s firmly set in the pre-adolescent world.

I Declare War is a breath of fresh air, whether you’re looking for a good movie about kids or a good war picture. It’s thrilling and funny and sometimes poignant in the way it captures little heartbreaks. It made me nostalgic without shoving rose-colored glasses onto my face, which is the best kind of nostalgia you can ask for.

I Declare War is now on VOD. It comes out in theaters August 30th.