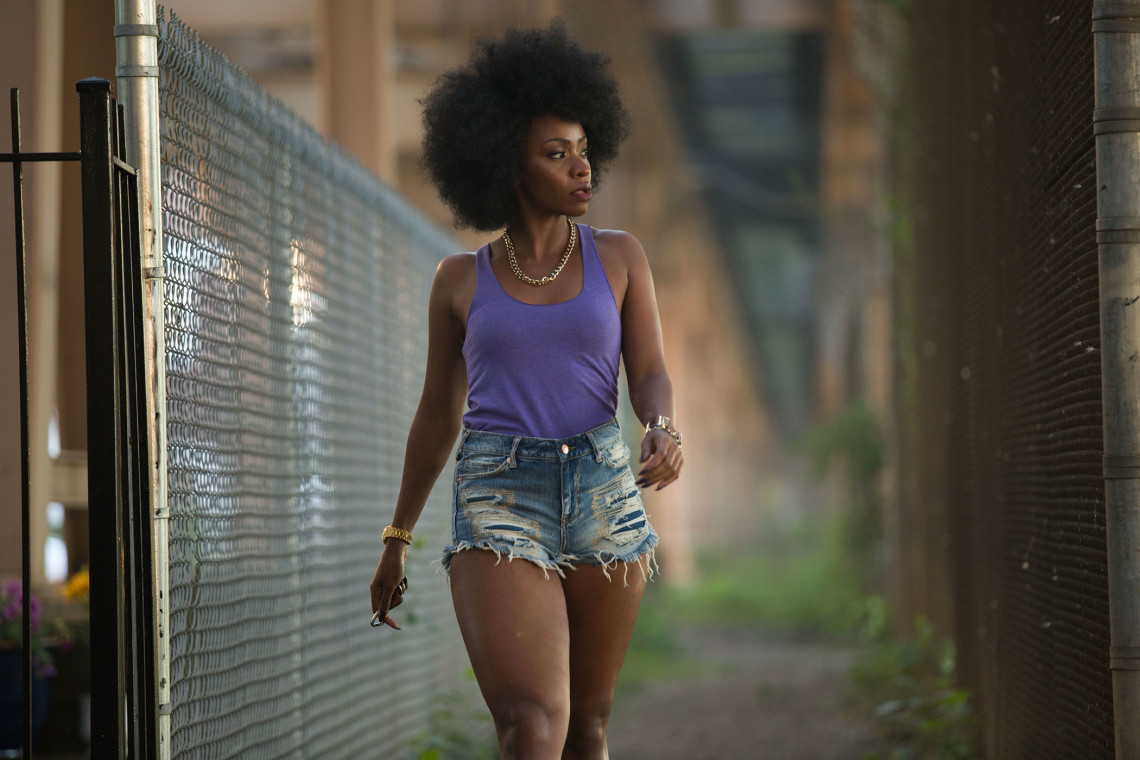 “Chi-Raq” Is A Glorious Provocation

Spike Lee doesn’t always make it easy for us fans. His restless, prolific output can often swerve from brilliant to asinine, sometimes within the space of a single movie, sometimes within the space of a single scene. But stick with the guy long enough and every once in a while you get something like Chi-Raq – a glorious provocation so singular, so urgent and so 100% “a Spike Lee joint” that it feels foolish to even point out that no other filmmaker ever could have made this movie, and not just because anyone else who had an idea like this would probably check into a mental hospital.

At once deeply sorrowful and exuberantly silly, Chi-Raq transplants Aristophanes’ 411 B.C. “Lysistrata” to present-day Chicago. It’s a scabrous, sexy musical comedy shot through with an almost unbearable sadness. The majority of the (filthy) dialogue is delivered in rhyming verse, with broad buffoonery bumping up against hectoring sermons and stunning moments of contemplation and grace. I have no idea how Lee manages so many sudden hairpin turns in mood, but the film miraculously feels all of a piece. It’s a bawdy, boisterous call to (dis)arms, kicking off with blood-red, bold-lettered words filling the screen: “THIS IS AN EMERGENCY.”

The mournful opening credits feature an illustration of the United States drawn entirely out of assault weapons, alongside sobering statistics detailing how gun violence in the Second City has claimed more American lives than our wars in Iraq and Afghanistan combined. Our tour guide for the evening is Dolmedes, a strutting, snappy-dressing Greek chorus played by Samuel L. Jackson (kinda-sorta reprising his role as Mister Senor Love Daddy from Do The Right Thing, but any resemblance to Rudy Ray Moore’s Dolemite is also entirely intentional).

He tells us of the war between the Spartans and the Trojans, two rival Chicago gangs currently shooting up city streets and nightclubs. The latter crew is led by Wesley Snipes’ Cyclops (boasting a diamond-studded eyepatch, naturally) while the former take their orders from Nick Cannon’s Demetrius Dupree. But when a stray bullet from a sidewalk skirmish claims the life of a neighborhood child, Demetrius’s girlfriend Lysistrata (Teyonah Parris, in a brassy, star-making performance) decides enough is enough.

Turns out she don’t gotta have it, at least not while her neighborhood is a battle zone. Lysistrata enlists the rest of the local ladies in a sex strike, taking a solemn oath to “deny all rights of access or entrance” until the men put down their guns. These women take over the National Guard’s armory and their media-savvy movement becomes a worldwide phenomenon, with demonstrations in multiple countries chanting “No Peace, No Pussy!” as mobs of increasingly exasperated males lament this “shutdown of the penis power grid.”

Chi-Raq is hilarious, easily one of the funniest films Spike has ever made. Lee co-wrote the screenplay with Kevin Willmott, whose 2004 mockumentary CSA: The Confederate States of America skewered stereotypes with similarly prickly abandon. There’s a dizzy, surreal sequence with General King Kong (David Patrick Kelly) gushing about his slave girl fantasies while humping an antique Confederate cannon in his stars-and-bars undies. Even better is the police chief’s plan to make Lysistrata’s army surrender by turning them on with 1970’s slow jams. (The ensuing performance of The Chi-Lites’ “Oh Girl” is the musical highlight of a film that’s packed with ‘em.) The point here, and it’s a good one, is to strip bare the childish entitlement of violent macho posturing as the men succumb to blue-ball dementia.

Meanwhile, these cartoonishly comedic sequences can somehow exist in a movie that’s also frequently devastating. There’s a shot of Jennifer Hudson (pointedly playing on real-life trauma) scrubbing her young daughter’s blood from a sidewalk that’s as upsetting as anything I’ve seen all year. John Cusack co-stars a local white-boy preacher (inspired by Chicago’s own Father Michael Pfleger) and the film stops in its tracks so he can deliver a devastating, voice-shredding sermon blasting everything from the NRA to privatized prisons. Angela Bassett commands the screen as local sage Miss Helen, leading the film’s up-to-last-week discussions of Eric Garner and Dylan Roof while summoning the specter of Sandy Hook by sighing: “When they murder white children / And things don’t change / Black lives are way out of range.”

Lee’s films are typically so overstuffed that individual plot threads can sometimes seem like they’re at war with each other. But Chi-Raq’s whiplash-inducing tonal roller-coaster feels more controlled and cohesive than even Spike’s less-outrageous efforts. All the heartbreak and anger and singing and dancing and rhyming raunchy humor and the exuberant, everything-including-the-kitchen-sink filmmaking style eventually amount to an all-hands-on-deck approach that feels exactly right for this moment, right now. After all, this is an emergency.

4 thoughts on ““Chi-Raq” Is A Glorious Provocation”