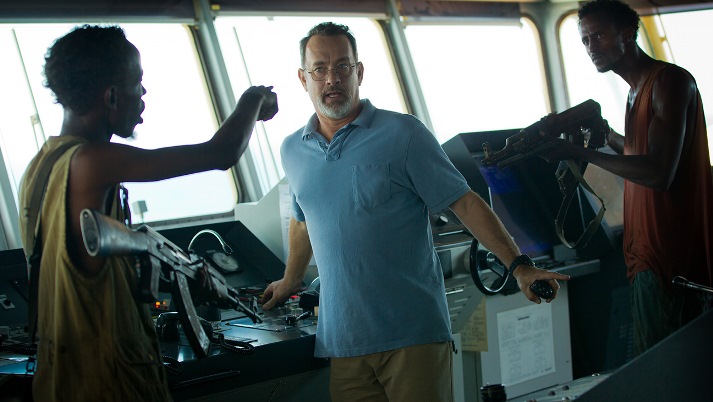 ‘Captain Phillips’ Is A Masterful Achievement From Greengrass and Hanks

Paul Greengrass’ Captain Phillips is the rarest of gifts: a thriller steeped in humanity. Based on the 2009 raid of the container ship Maersk Alabama by Somali pirates, it’s a triumph of studio filmmaking with a deceptive simplicity that unfolds to reveal surprising complexity, and its palpable tension caused my fingernails to mysteriously grow shorter during its runtime.

Greengrass was clearly an inspired choice, as no action director alive so effortlessly creates the semblance of realism, and he’s never done it better than with this film. Tom Hanks also gives the best performance of his career; it turns out his intensely earnest Everyman vibe, usually captured behind the sheen of slick Hollywood fare, is perfectly suited for Greengrass’ grounded style. After an astonishingly intense start to the action, the tension somehow continues to steadily rise throughout, leading to one of the most emotional and satisfying endings to a film you’re likely to see this year.

We begin with Captain Phillips (Hanks) going to the airport with his wife (Catherine Keener). He laments the world his children are going into: it will get harder and harder for the future generation to find jobs, and only the exceptional will have a shot at the occupation of their choice. Phillips doesn’t exactly have a dream job himself: his shipping routes take him across the globe for long stretches of time, away from family and comfort, but he does what he must to make ends meet in today’s economic climate. As soon as we think Phillips doesn’t have an ideal situation, we go to Somalia and meet Muse (Barkhad Abdi).

A warlord looms over his village, and life can go to hell quickly if he isn’t satisfied, so Muse takes work as a mercenary, pirating ships that use the Somali shipping lanes, either stealing the money and valuables or holding the cargo and crew ransom. He helps select a crew and they head out on a small boat with automatic weapons and tall metal ladders, hoping to find a big score. When they approach Phillips’ boat, the pirates realize the size and scale of this attempt has a small likelihood of success, but when others turn around, Muse insists upon plowing ahead; he too sees importance in being the exceptional one in his job market.

It would have been easy to make Captain Phillips into a traditional hero. We expect Phillips to attack one of the pirates, or to make some stroke-of-genius decision that will save his life. Thankfully, the film dodges that bullet, and Phillips remains, compellingly, just a man. One could debate the intelligence of some of the choices he makes in the heat of the moment, and the script by Billy Ray plays with the audience’s expectations.

At one point, he wraps the injured foot of one of his abductors and pulls a knife out of his pocket. The other pirates freak out and snatch it away from him, but Phillips just sits, confused. He merely wanted to cut the excess bandage away; it hadn’t even occurred to him to try to use the knife to his advantage. His scheme is to survive, moment by moment, with earnest pleas to the humanity of his kidnappers.

It would have been even easier to remove that humanity. There are few things Hollywood loves more than a savage dark-skinned villain, and we’ve already seen plenty of unnervingly cartoonish depictions of blood-thirsty Africans in embarrassingly recent action film history. Thankfully, Muse remains free of judgment at the hands of the filmmakers.

We understand his motivations, and we understand his plight, even if we don’t agree with the measures he’s taking. Abdi gives a tremendously open performance in his acting debut, going from scary to secretly terrified in a heartbeat, and his eyes are so expressive that we always feel his internal wheels turning.

I feared that an Impassioned Monologue For Understanding was lurking just around the corner, but it never arrives. Ray’s script builds character through their behavior in times of adversity, without shoehorning in unnecessary backstory. Muse objects to being labeled as malicious, insisting that he is merely a fisherman doing what he has to do, yet he boasts at one point about a previous ship he hijacked. Later, Phillips sneers, “You’re not a fisherman.” This is the best way for Muse to get the money he needs quickly, but that doesn’t allow him to pass the burden of responsibility elsewhere. One could argue Phillips, by knowingly taking his crew into dangerous waters, is doing the same.

The conclusion of the film is likely to create a diverse set of responses. The military involvement and subsequent takeover of the events off the coast of Somalia is frighteningly swift and terrifyingly precise. All manner of resources are put into action to resolve this situation and bring Captain Phillips home. One can’t help but feel a certain way about the enormity and scale of the American reaction. The Somalians are so hopelessly outmatched that, despite the danger Phillips is in, it feels like fishing with dynamite. I felt a surge of patriotism in watching the awe-inspiring precision of the SEALs, yet at the end, in a moment where a pirate realizes all of his power is gone, I oddly felt pangs of heartbreak (and shame, thanks to a few ugly Americans boastfully laughing in my audience).

Greengrass puts our focus on the human element of the broader spectrum as well: if America has this level of expenditure ready for one kidnapped captain, what level of expenditure do we have for whole countries of people who desperately need resources and monetary assistance on a daily basis, like the kidnappers’ homeland? During continued economic hardship and an increasingly large divide between the wealthy and the poor, Captain Phillips uses thematic complexity to create a sense of urgency.

While the cast as a whole is terrific, Hanks deserves special commendation. He’s playing wildly against type here. His crew barely likes him; in their first scene together, the crew is laughing and enjoying each others’ company until Phillips arrives and cuts off their coffee break. The Tom Hanks in Charlie Wilson’s War, The Ladykillers andYou’ve Got Mail could sell ice on the North Pole, but here he seems shifty, not the polished salesman with a wink and a smile we’re used to. Hanks’ performance is raw, nuanced, and the closest to gritty he’s ever come in his career.

In the final minutes of the film, Hanks lets loose in an absolutely devastating couple of scenes of raw emotion, the best acting in his career to top off his greatest performance. In Greengrass, Hanks has found the man who can remove the Hollywood trappings and capture his acting in its purest form. Captain Phillips as a whole is storytelling in its purest form: it works as a no-fat thriller, yet it achieves nuanced character dimension and thematic complexity. For Paul Greengrass and company to have pulled off such a feat in the studio system is nothing short of a miracle.