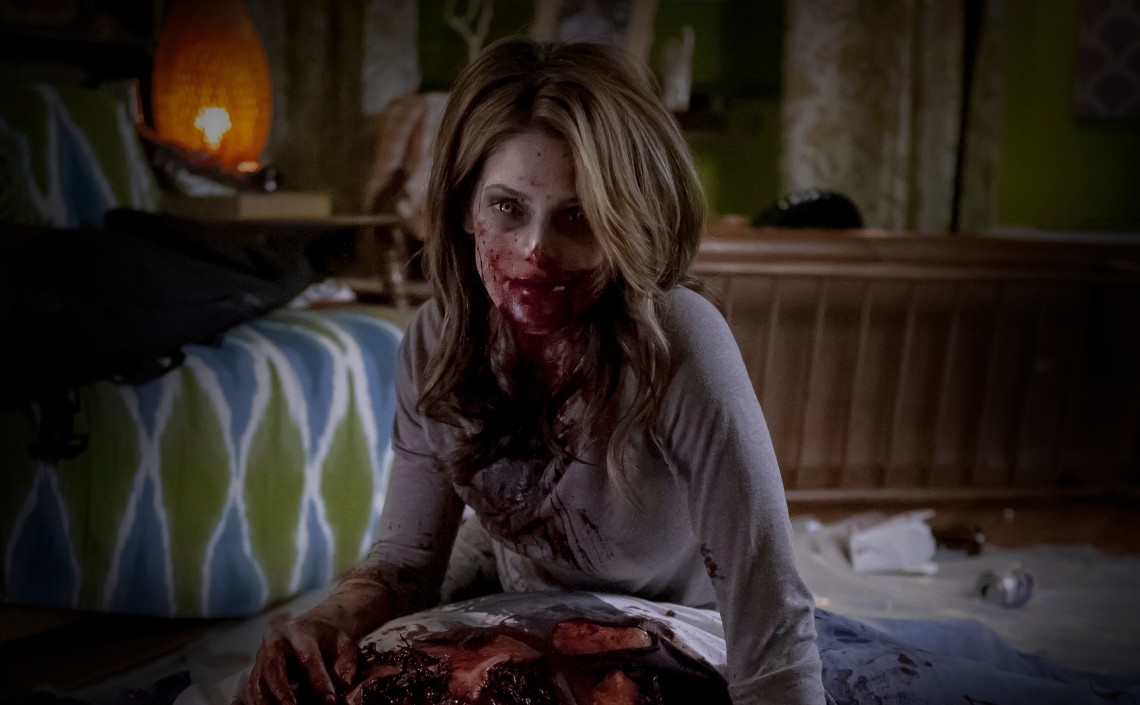 Relationships are hard, especially when one partner is undead and wants to kill the other so that they’ll be together—forever. Burying the Ex is closer to Gremlins (1984) than The Howling (1981) when it comes to the Joe Dante scale of horror. In fact, other than the fact that Evelyn (Ashley Greene) is a zombie, this is more a macabre comedy about the (literal) gruesomeness of having a relationship that never ends than it is a horror film. Dante’s irreverent humor is best exemplified by the intercutting of a sex scene with Evelyn attempting to eat the brains of her boyfriend’s half-brother.

However, what does get carried over from the more outrightly scary The Howling is Dante’s knack for showing the transformation and decay of the body. As Burying the Ex zippily moves along, Evelyn’s skin starts peeling off her face, revealing patches of rough red lesions that stand out against her deathly white skin. Perhaps Dante did not have the budget necessary to indulge in more elaborate bodily transformations, but he makes do all the same.

The way Evelyn gets to be one of the undead is pretty simple. Her boyfriend Max (Anton Yelchin), the protagonist of the film, calls to meet him at the park to break up with her in a public space, so that she can’t go bat-shit crazy. He’s riddled with guilt over wanting to break up as he knows that he’s her everything. But see, Evelyn’s a little bit crazy. She’s an environmentalist who would make even the most tenacious Greenpeace canvassers uneasy. She’s domineering, emotionally unstable, selfish and manipulative – generally speaking, not a great girlfriend. But Evelyn’s also never detestable, as Greene imbues her with a peppy likability and moments of chastised vulnerability and sincerity. As Evelyn crosses the street to meet Max, she gets hit by a bus and dies only to return as a zombie. This happens because a magical devil genie who arrives out of the blue at the horror paraphernalia store Max works at takes Max’s post-coital pledge to be with Evelyn forever as a cursed wish that must be granted. So Max gets stuck with a relationship that just won’t end and is threatening to take the life out of him. While the zombie situation does not make for the most subtle metaphor about relationships, it does make for a pretty fun and crackling film.

For anyone who has lived in Los Angeles, and more to the point, for anyone who’s ever lived as a cinephile in Los Angeles, Burying the Ex checks off all the necessary totems of LA cinephilia. After Evelyn’s death Max visits the New Beverly Cinema to watch a double helping of Val Lewton/Jacques Tourneur with I Walked with a Zombie and Cat People. While there he runs into the cute and similarly horror-loving Olivia (Alexandra Daddario) who owns an ice cream parlor that specializes in retro ice cream flavors.

They end up hanging out at the Hollywood Forever Cemetery, where Evelyn pops back up from the dead, forming a bona-fide love triangle. Here, Olivia rattles off the names of the people who have been buried there: Peter Lorre! John Huston! Johnny Ramone! Whenever there’s a TV on either at Max’s work or at home it’s always playing a horror film (Plan 9 From Outer Space, The Whip and the Body, The Gore Gore Girls, etc.) Later, Olivia and Max return to Hollywood Forever to watch, what else: Night of the Living Dead. These horror film cameos (so to speak) create an immediate and obvious intertextuality that is endemic to Dante’s work, which is the work of a cinephile whose devotion to the art can’t help but infuse his work with such overt, or in the instance of his other films, more subtle, nods to the medium he loves so much. And it’s hard not to smile at that.