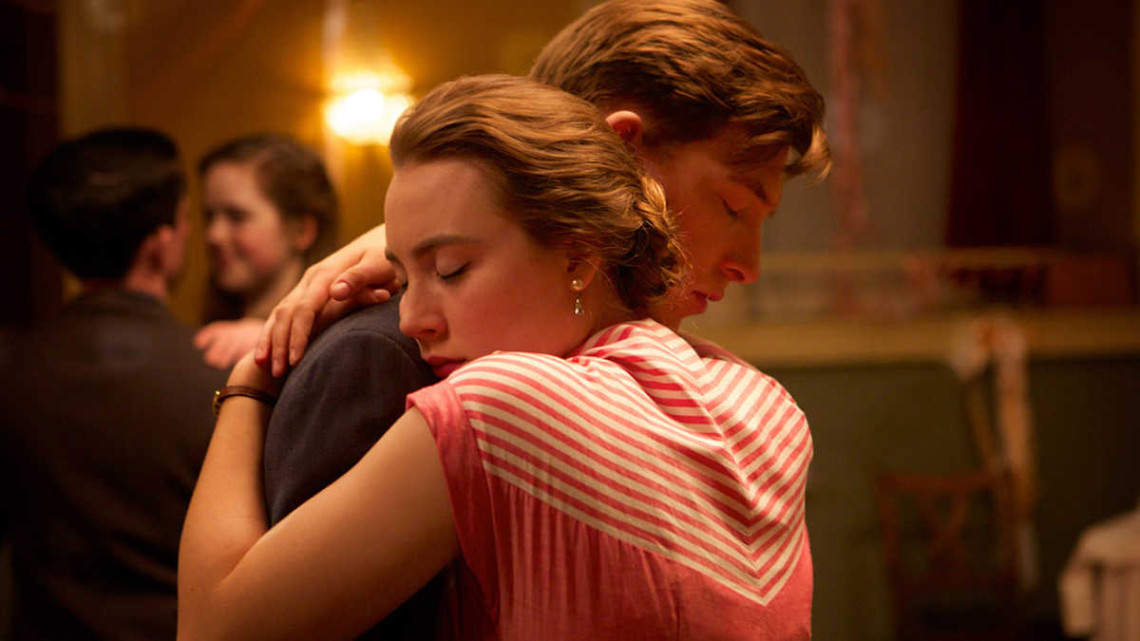 It’s 1951, and young Irishwoman Eilis Lacey (Saoirse Ronan) is moving to America. She hugs her mother and sister goodbye, goes through some trouble on the boat trip across the Atlantic, and ultimately settles in—you guessed it, Brooklyn. Between dealing with a humorously conservative landlady and gossipy roommates, Eilis struggles with acute homesickness and adjusting to her new surroundings. Ultimately, she finds solace in the arms of the strapping Tony (Emory Cohen)—but just as she becomes accustomed to America, a crisis back in Ireland causes Eilis to be torn between her two homes.

Brooklyn is not an American film—it’s an Irish/U.K./Canadian co-production—but it nonetheless takes place entirely within an idealized vision of the American immigrant experience. The movie does not dwell too long on familiar signifiers like Ellis Island (shots of immigrants gazing wondrously upon the Statue of Liberty as their ship draws into port are thankfully absent), but it feels like what a romantically minded young white person might project in their mind when imagining their grandparents or great-grandparents coming to the country. The atmosphere is so gentle that even the most emotionally charged conflicts feel low-pressure. The world is so clean that the dirt on a plumber’s jeans seems decorative, and any swearing is rendered adorable by the inflection of an Irish brogue. Brooklyn is tasteful almost to the point of being anodyne.

There’s nothing wrong with the film adopting a purposefully throwback nature, of course. It’s questionable whether it’s healthy to indulge the mythic ideal of foreigners making their way in America through sheer pluck and bootstrap-leveraging, but Brooklyn isn’t as concerned with an “accurate” depiction of mid-century immigration than it is with exploring the meaning of home and telling an old-fashioned romance story. Still, the movie’s sheer harmlessness frequently kept me disengaged. It doesn’t help that Eilis’s ultimate choice between Ireland and America comes across as a ridiculous stacked-deck no-brainer, particularly since it’s embodied in a love triangle of sorts with the dreamy Tony on one side and the blank Jim (Domhnall Gleeson) on the other.

On every technical level, the film is assured. Nick Hornby’s screenplay, adapted from the book by Colm Tóibín, is full of good humor and humanizing little details. John Crowley directs with a stately leisure that befits the overall nonthreatening tone: The images are calm and track smoothly, with even the handheld-shot intimate scenes never getting too jittery. Ronan again demonstrates that she’s in a class of her own as a young actress; especially in early scenes, Eilis has much more to say physically than vocally, and subtlety is a second language to her. Behind her is a lineup of fully capable character actors, such as Jim Broadbent as a kindly priest and Julie Walters as the landlady. Brooklyn’s dreamy and fleeting pleasures are delivered with the utmost competence—but one can’t help but also imagine the more resonant and insightful film it might have been if it had aimed to elicit more than longing sighs.