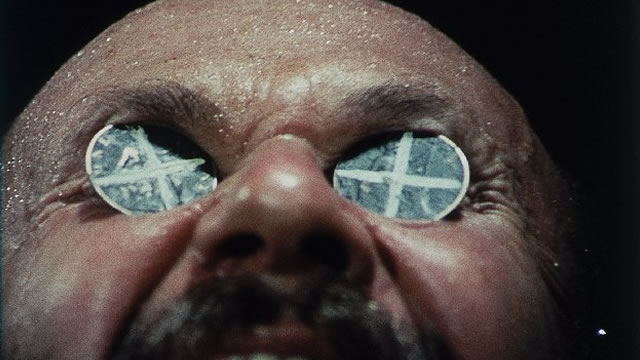 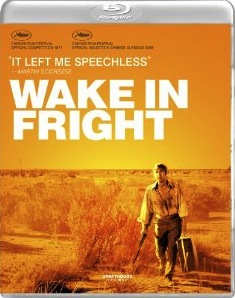 From its opening 360-degree pan, Ted Kotcheff’s Wake in Fright paints the Australian wild as a terrifying void where the only thing more unsettling than desert as far as the eye can see are the false oases of ostensible civilization that grow out of the dust. John Grant (Gary Bond), a schoolteacher heading from his dull assignment in the middle of nowhere back to Sydney for Christmas, learns this the hard way when his train has to stop over overnight  in a small mining town the locals call “the Yabba.” Grant’s sense of superiority seeps through clenched teeth as he speaks to strangers with arrogant disdain, but soon his sense of dignity and social acceptability are consumed by the same gambling, violence and drink that traps the men of the Yabba in a hellish cycle of basic survival that may be worse than death.

Kotcheff establishes his world masterfully. In the Yabba, he begins by showing the usual facets of small-town life: a place of humble run-down houses, old shops and gigantic mining equipment that looms over the area as urban civilization’s cruel joke on its rural counterpart. By night though, the Yabba comes alive in the worst way. Kotcheff establishes interiors with shots looking toward the door, capturing the cramped walking paths and spare seating of dives and diners. Then his camera begins to turn and track away from the door, away from the contained, ordered set and toward massive dens of sin; enormous rooms cast mostly in darkness with only a few overhead lights to illuminate the sordid activities that occur below.

Kotcheff’s majestic, troubling establishing shots push in closer to Bond as Grant gets caught in the undertow of this world, loses his money and finds himself strangely, inexorably drawn to a pit of goons led by the Devil incarnate, an alcoholic doctor played by Donald Pleasence. The shots, all taken on camera mounts and rails, nevertheless attain a visceral intensity as Kotcheff begins to use shorter shot lengths to depict much more harrowing acts, from a nasty kangaroo hunt to sexual aggression of several varieties that conveys desperation for the woman who uses it to stave off suicide in a nearly all-male community and power for the man who takes sex the way men take everything else in the Yabba.

That blend of classical filmmaking technique with rawer, more transgressive material echoes throughout the film in subtle ways, particularly when Grant comes literally stumbling back into town near the film’s end, nursing a (perhaps) permanent hangover and casually toting a rifle. John Scott’s score communicates the look on Grant’s face before he even gets near the camera, blending the sound of a theremin (a classic Hollywood shorthand for drunkenness since Billy Wilder’s The Lost Weekend) with something more avant-garde, a metallic scrap of strings that sounds like a car crash in slow-motion. Broadly speaking, such touches illustrate how the film, made by a Canadian with funding provided in part by Americans, ushered in a new Australian cinema just as new waves were rippling in so many cultures. Even outside its historical context though, Wake in Fright is an enduringly powerful film, an account of a white man “going native” without ever leaving his ethnic group.

Sourced from a painstaking, frame-by-frame digital restoration performed in 2009, Image Entertainment’s Blu-Ray looks astonishing. Kotcheff’s deliberate use of hot colors truly suffocates indoors and outdoors, day or night; even the faint tint of green in the film’s early segment takes on the light, arid hue of a sun-bleached cactus. The disc ably captures the perilous depth of Kotcheff’s bleak, existential compositions, adding to the film’s horrific powers.

The audio on the other hand is a different story. Like the Australian Blu-Ray released in 2009, Image’s disc comes with the film’s original mono in lossy format. The track is acceptable and clear, but it still sounds relatively soft compared to the force of the imagery. A full remix or surround-sound conversion was not necessary, but the absence of a more robust lossless track for the mono on both releases is odd.

Wake in Fright is more than just a sadistic exploitation feature filled with carnage. It is a haunting, despairing vision of primal drives that still rage inside of people, caged instincts that can break free when its jailer, society, dissipates in the hot air. Despite the absence of a lossless audio track, Image Entertainment’s Blu-Ray preserves the savage beauty and intensity of Kotcheff’s achievement. The extras provide a great deal of information and context, but one need look only into the crystal-clear image of a man stripped of everything he thinks he knows to see why this film, practically unavailable for so long, influenced so many.

Wake in Fright can be pre-ordered at Amazon here. Collectors may also check out Drafthouse Films deluxe offerings here. The region-free Austrialian Blu-Ray may be acquired here.