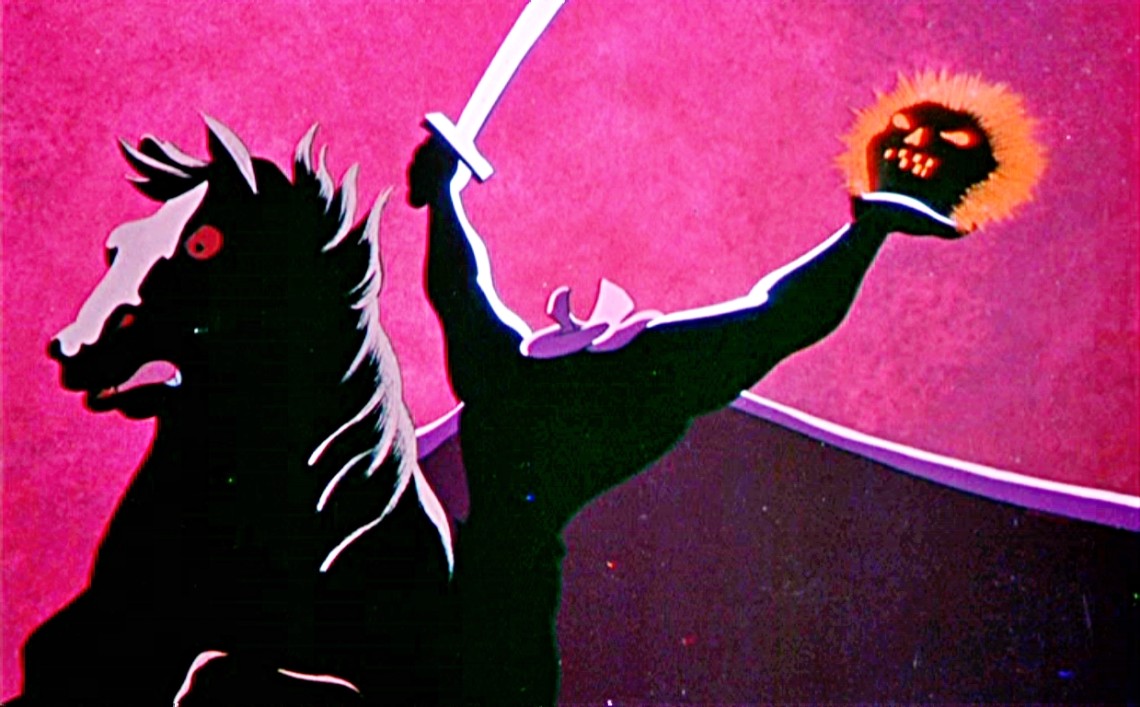 The 1940s were a period of great and painful upheaval at Walt Disney Studios. They started with Pinocchio and Fantasia in the same year—a hell of a one-two punch—but ended the decade with the last of many package films, The Adventures of Ichabod & Mr. Toad. Both this film and Fun and Fancy Free, one of the last times you could hear Walt Disney himself perform as Mickey Mouse on the big screen, have finally made it to Blu-ray in a double feature that’s the first of its kind. These are the first two package films—if you don’t count Fantasia, which feels much different and more cohesive than these more tossed-off pictures—to make it to Blu-Ray; hopefully, that means we’ll finally get The Three Caballeros and Saludos Amigos in the next year or so.

Of the duo, Ichabod is the better one, if only because the adaptations of “The Legend of Sleepy Hollow” and “The Wind in the Willows,” as narrated by Bing Crosby and Basil Rathbone, respectively, are more consistently entertaining than the two sections of Fun and Fancy Free. (Though, hey, if you like Edgar Bergen and old-style ventriloquism, the latter film may be your bag.) There’s little connection between an adaptation of one of the great scary stories of the Colonial era and a British children’s story about anthropomorphic animals in various “manias” of vehicular travel, but by themselves, the shorts are clever, witty, and, in the case of “Sleepy Hollow,” kind of terrifying.

Fun and Fancy Free, as the title portends, is a lightweight picture, featuring a redo of “Jack and the Beanstalk” with Mickey, Donald, and Goofy as the leads; and the tale of “Bongo,” a circus bear who falls in love after he escapes to his natural habitat, the forest. Bergen, his characters Charlie McCarthy and Mortimer Snerd, and Jiminy Cricket are the essential hosts of the picture, but they feel more like time-fillers than legitimate emcees. Crosby and Rathbone are far better integrated into Ichabod & Mr. Toad, their dual narrative presence more natural than that of a ventriloquist performing at a little girl’s birthday party. (And a sparsely attended party, to boot. It’s silly to nitpick, but said girl, Luana Patten, apparently has no parents.) For the completists among us, it’s good that Disney’s finally releasing these on Blu-Ray, but neither of these ’40s movies feel nearly as essential as those from the beginning of the decade.

Including the special features, this Blu-Ray has some seriously impressive video and audio. For a long time, The Adventures of Ichabod & Mr. Toad, in particular, has desperately needed to be spruced up from its old standard-definition transfer. This release doesn’t disappoint, while never smoothing out the grain so much that the finished product looks too clean or unnaturally shiny. (Like, say, the cover to this Blu-Ray.) Unlike the poorly executed Sword in the Stone Blu-Ray, this double-feature (it’s really a triple-feature, but more about that in the Extras section) is pleasantly worthwhile simply in terms of the HD upgrade. It would be easy to imagine Disney half-assing the Blu-Rays for the entries of the package era, but they’ve done well by these films in the audio and video transfer, specifically.

On one hand, the Blu-Ray disc—there are two DVDs as well, about which more in a bit—has but one special feature. What’s more, this special feature has, technically, nothing to do with either The Adventures of Ichabod & Mr. Toad or Fun and Fancy Free. However, it’s one of the most vital supplements the company’s ever offered: The Reluctant Dragon. This 73-minute feature came out in the summer of 1941, in the midst of the Disney animators’ strike and mere months before World War II dominated the studio’s time as it worked on gung-ho American propaganda. So while it’s a slight tour of the studio from the vantage point of writer and gadfly Robert Benchley, The Reluctant Dragon is of extraordinary importance and interest to anyone remotely curious about how films like Bambi or Dumbo were actually made.

Though you can watch The Reluctant Dragon right now via Netflix Instant in HD, there’s no telling how long that film will be streaming or if the quality will be similarly impressive. Even though it’s just a supplement, The Reluctant Dragon looks and sounds fantastic on this Blu-Ray. You may have no interest in either of the main features, but seriously, this is worth your entire purchase. The Reluctant Dragon is far from perfect, both in its unsurprisingly sanitized presentation of Walt Disney Studios and in littler moments (as when Benchley pockets a maquette of a black centaur from Fantasia), but it’s a most necessary piece of Disney history and one whose preservation is a great story indeed.

A quick note on those DVDs, however: each one has a “storybook” for “The Legend of Sleepy Hollow” and “Mickey and the Beanstalk,” respectively. Also, the Fun and Fancy Free DVD has a behind-the-scenes look at the film. Baffling that they’re not on the Blu-Ray as well, but hey, better have them somewhere than not at all.

Do you have any interest in the history of Disney animation? If so, for the feature-length special feature alone, you’ll want to buy The Adventures of Ichabod & Mr. Toad/Fun and Fancy Free posthaste.

One thought on “Blu-Ray Review: “The Adventures of Ichabod & Mr. Toad”/”Fun and Fancy Free””