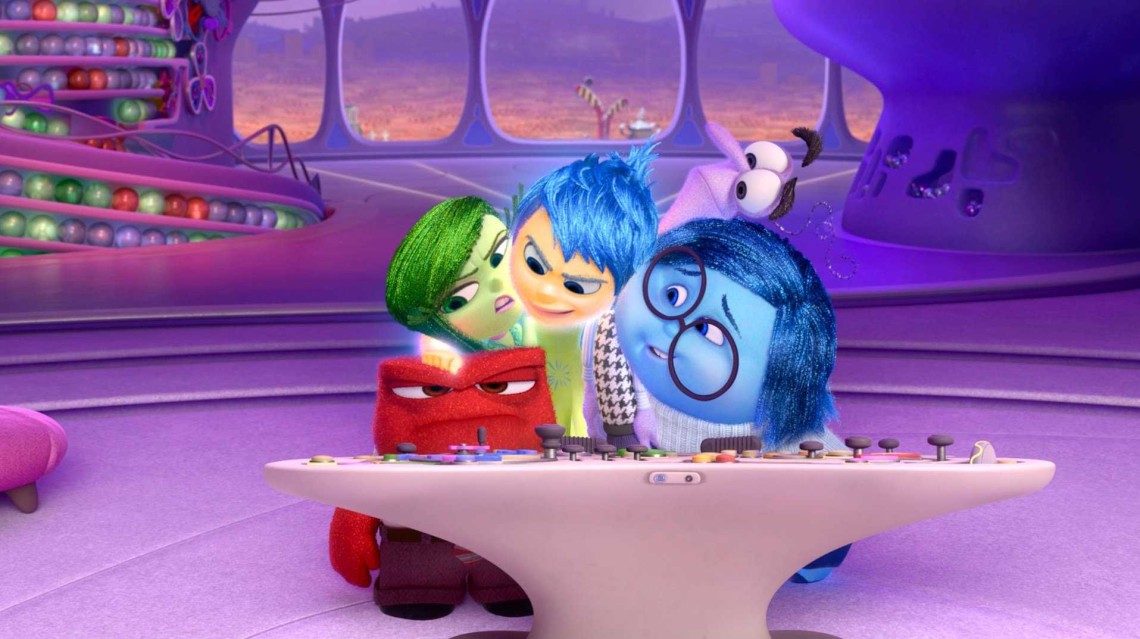 It’s been a very good year for Pixar; November, in particular, is a banner month for the studio. In a few weeks’ time, just before Thanksgiving, the animation studio is releasing its second film this year, The Good Dinosaur, a first in its history. That release comes mere days after the 20th anniversary of their first film, Toy Story. And kicking the month off, we have their most recent film, Inside Out, coming to Blu-ray. Pixar does right by its films’ home-media releases, as will be detailed later, but it helps when the movie is as funny, knowing, and honest as this. What Pixar does is best is on full display here: create a completely unique, lived-in world with memorable characters, thanks to breathless pacing, snappy writing, and a lack of condescension.

The latter element may be the standout in Inside Out, whose emotional stakes are simultaneously miniscule and massive: will an 11-year old girl be able to accept the reality of moving cross-country, or will she run away from her parents at the most confusing point of her young life so far? This struggle is personified inside her mind, where the majority of the action takes place. Riley, the 11-year old girl, is less of a protagonist than a setting, with the five emotions–Joy, Sadness, Anger, Disgust, and Fear–that guide her daily actions as the lead characters. From the outset, Joy (Amy Poehler) is the leader, with the other four meant to follow in her wake. But, coincidentally, as Riley’s childlike reactions give way to confusion and rebellion against her well-meaning parents, Sadness (Phyllis Smith) begins to unintentionally wrest control from Joy, leading the two of them to accidentally leave the Headquarters of Riley’s mind. Thus, as is the case with many previous Pixar films, two mismatched characters set off on an adventure.

What makes Inside Out distinct from other Pixar efforts, most of which are equally entertaining, is its dedication to creating a logical world inside of the mind without getting too bogged down in the details. The rules of the world are clearly defined and established within about 10 minutes; the entire film is only 95 minutes long, which is genuinely surprising give the amount of space covered in that period. But it’s a good thing that director and co-writer Pete Docter gets rid of the exposition as quickly as possible, allowing the emotional relationship between Joy, Sadness, and Riley herself to emerge and have the greatest possible impact. Poehler, as usual, is brilliant in channeling the intensity that comes with being upbeat and peppy all the time; she’s just as able here as she was on “Parks and Recreation” to communicate how such a person can be concurrently charismatic and obnoxious. Smith, in a more deliberately one-note role, manages to never make Sadness too much of a pill to be around; the emotion’s general mopiness takes on more value as the story progresses.

The second-act discovery Joy and Sadness make of Riley’s now-forgotten old imaginary friend Bing Bong (Richard Kind, delightfully hammy) leads them to realize how much they matter to Riley equally, and how terrifying a prospect it would be to be lost in the back-alleys of Riley’s mind. Though Bing Bong’s final moment remains the big gut-punch here, don’t forget the surprising but savvy choice at the beginning of the scene, where Joy, stuck in the memory dump, holds one of the joyful core memories and comes to accept how screwed she is. What’s remarkable about the scene is less the content of the shot than the fact that the shot holds on her for close to a minute.

In spite of its nearly manic pacing, Inside Out doesn’t sacrifice emotion for humor. There’s such a wealth of both, with a handful of comic setpieces coming close to the best of Pixar’s early work, such as a sequence where Joy tries to wake Riley up by infiltrating a dream of hers, in a faux-Hollywood studio lot. And even after Bing Bong’s last scene, Riley coming to terms with her emotions and facing her parents honestly, as well as Joy realizing the value of Sadness influencing “their girl’s” old memories, is devastating enough. The early conventional wisdom on Pixar was that their films were buddy comedies at the core, witty and wild pieces of old-school action comedies dressed up with inventive animation. The new conventional wisdom is that Pixar wants you to cry. Inside Out represents the best of both worlds.

Just as Pixar Animation Studios is the pinnacle of computer animation, so too are the audio/video qualities of their Blu-rays. Inside Out comes awfully close to being the most colorfully variant story in their 20-year filmography, and pops off the small screen as much as it does on the big screen. Even the Blu-ray menu screen (on both discs) is a microcosm of this film’s gorgeous sights and sounds: against a comforting blue background, multi-colored circles float by, akin to the memories displayed in the film, with a light composition playing on the soundtrack. For such a delightfully speedy and almost manic picture, Inside Out’s Blu-ray menu is weirdly soothing, yet a small example of the overall impressive A/V transfer. (As a note, there is a 3D Blu-ray available, but this review is based on a 2D Blu-ray.)

In past Blu-ray reviews, I have bemoaned the state of special features in Disney home-media releases, but it’s important to note that Pixar stands firmly opposite that trend. Everything that Walt Disney Animation Studios releases, such as Big Hero 6 and Frozen, lacks in extras, Pixar makes up for. And the Inside Out Blu-ray is no different. The 3-disc package is brimming with behind-the-scenes documentaries, deleted scenes, an audio commentary, and more. The deleted scenes (located on the second disc) are illuminating primarily because they emphasize a fact proven by other Pixar Blu-ray releases: the seemingly perfect finished products only become so pristine because the people working on these films try out a lot of different ideas first. In the case of Inside Out, consider that the story originally hinged on a relationship between Joy and Fear (then named Freddy). Or just Joy and Bing Bong. Or just Joy herself.

The commentary track, which features Pete Docter and his co-director Ronnie Del Carmen, primarily focuses on three aspects of the film, including its genesis, emotional sense, and even its cinematography. And, in a nice twist (especially relative to some of Pixar’s past commentary tracks), there are a number of cameo appearances, of a sort, courtesy of such figures as the film’s director of photography–layout to Bill Hader himself. Docter and Del Carmen are both effusive and enthusiastic, talking about the lengthy process of this film’s existence. One of the most common things they emphasize is simple: however smooth and slick the finished product may seem, Inside Out was nowhere near that in its early stages. Hell, at one point in the development phase, as Hader recalls, Riley gets knocked out for the majority of the story. There are, as you might expect, a few lulls in the commentary, but the balance of wonky detail and personal connection make it a winner.

The message communicated through many of the extras is simple: the movie we got nearly didn’t exist. One of the more revealing extras includes footage Docter shot of himself on Father’s Day 2012, walking through the woods and clearly emotionally frustrated at the state of the project; in the video, he essentially comes to the epiphany that the story is about Joy and Sadness, and about Joy realizing Sadness’ importance to Riley. (Maybe he’d already come to the epiphany, but describing it here, in such an off-the-cuff manner, is remarkable.) But even if you’re just interested in how the film came together, the Blu-ray has you covered, with featurettes focusing on the film’s score, writing process, production design, sound editing, and more. The big new extra is on the first disc, a short called “Riley’s First Date?” (The question mark is intentional.) Consider it an expanded take on the closing-credits gag, wherein we visit the minds of other characters; here, we get further inside the mind of the boy who Riley stumbled upon in the feature near the end, as well as Riley’s father. It’s slight, but funny, and if you’re a fan of AC/DC…well, you may like where this ends up. Also, for the masochists among you, Lava appears on the first disc. (I remain convinced that it’s forgettable, but not quite the worst thing in the history of mankind, but to each their own.)

Inside Out is Pixar’s best film since Toy Story 3, and their best original film since Up (though you could make an argument that it’s their best in over a decade). The Blu-ray more than measures up to the film’s high standard of quality. Run, don’t walk, to get it.