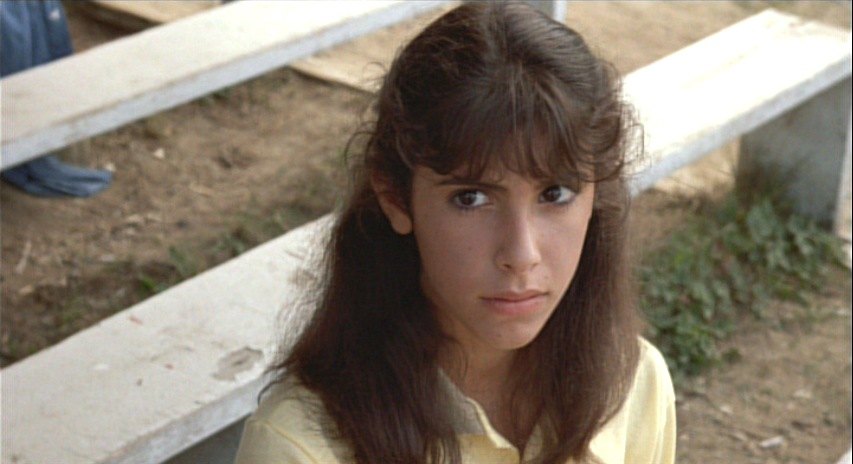 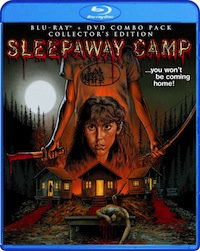 “In fond memory of Mom, a doer.” So begins Sleepaway Camp, a film that more than matches this bewildering dedication for weirdness and structural dubiousness. Its first shots throw build-up to the wind, laying belligerent music over placid dissolves of a lake town that do more to let the viewer know that something bad will happen that the actual tragedy of some teens in a motorboat running over a man and one of his two children. The sequence unfolds so cheaply, with the teens freaking out when they still have half a lake between them and the family’s capsized sailboat, that is a miracle that the dad could not swim his children to shore before the motorboat reaches them.

It only gets stranger from there. Fast-forward eight years as Angela (Felissa Rose), the surviving child, prepares to head to Camp Arawak with her cousin Ricky (Jonathan Tiersten). Traumatized to the point of near-catatonia, Angela arrives at camp to discover salacious adult staff, cruel girls and hormonal boys. It’s overwhelming, and then people start being maimed and murdered. The attacks grow more violent, but they all unfold similarly: POV shots from the killer’s perspective surprise a target who has just enough time to gasp some variation of “You!” before being dispatched. Given a narrow suspect pool, it’s obvious well before the end who the killer is, but as just about everyone now knows, including those who haven’t seen the film, the real twist is not who the killer is, but the killer’s real identity.

Make no mistake: this film is bad. Its dialogue sounds like the teenagers wrote it; the death scenes are neither sufficiently clever to surprise nor gory enough to shock; and its deeply sexualized violence is especially disturbing as it applies to teens only just entering puberty. Yet it is bad in such an unorthodox way, so utterly unlike anything else, that it is never anything less than watchable. There’s something inexplicably compelling about Ricky’s odd but functional comeback to a bully’s “Eat shit and die” with “Eat shit and live,” or a flashback of Angela’s father with his male lover, set against a black void. Thing that would never, nor should never, occur to a human being to even think, much less place in a final cut happen back-to-back.

The complete lack of actorly guidance also makes for wildly inconsistent performances. The kids are mostly stiff and untrained, while the adults can be either manic or as bad as the younger actors. Two in particular stand out: Obie-winning, Tony-nominated Mike Kellin, in his final role, as the camp owner who believes the murders to be a conspiracy against him. Kellin was renowned for playing tough guys; I wonder how many of those roles called him to prove it by beating the shit out of an 18-year-old who looks 13.

And then there’s Desiree Gould as Angela’s aunt and adoptive mother Marta, a doctor who must spend most of her days raiding the anesthesia supply. She dresses like the background of a ‘60s color Godard film, and even when she has two lines of dialogue in a row, every one of her sentences sounds as if it were edited to stop at the precise moment she burst into spontaneous song. Confined to two scenes at opposite ends of the movie, Gould steals the show, and in some alternate universe there is a feature that just follows her in the weeks that her children are away, addressing cadavers as her patients and instructing stray squirrels on the importance of flossing after meals.

The performance that centers the film, though, is not bad. Rose, all of 13 at the time, has the task of portraying mind-boggling levels of PTSD with nothing more than intense stares, and she pulls it off. Take out the twist, and the film could piggy-back off of her into a stilted and tasteless but nonetheless unique exploration of sexual awakening, Around her, the film devotes far more camera time to the boys in absurdly skimpy clothing (one counselor does not so much wear a cutoff shirt so much as he whittled a shirt down into a bib). Her memories of her father’s homosexual affair, attraction to a boy in camp and the raging hormones of the teens and adults all around her make Sleepaway Camp a debased ode to uncontrollable feelings, and it may be that, more than its single-use surprise, that makes it an enduring cult object.

Scream Factory’s releases fall into one of two camps: the lovingly restored and the overly scrubbed. In a testament to the film’s evergreen popularity, Sleepaway Camp hits Blu-Ray sourced from a 2K scan of the film’s negative. In short, the film looks better than it has any right to, with healthy grain retention and full colors. Some shots naturally hold up better than others, but that’s a result of the filmmaking, not the disc. Most of the time, you can practically smell the denim. I cannot imagine it ever looking better, or why anyone would feel the need to devote time to trying. A 2.0 DTS-HD Master Audio track is limited by the mediocre quality of the source track, but if nothing exactly pops out of speakers, dialogue and music remain well-balanced and error-free throughout.

If you’re in desperate need to know just about everything to do with Sleepaway Camp, you’re in luck: the disc comes with not one but three commentary tracks, an old ones of Felissa Rose and director Robert Hiltzik and two new ones of a moderator with Hiltzik, as well as a paired recording of Rose and Jonathan Tiersten. Rounding out production details is a 45-minute documentary entitled ”At the Waterfront After the Social: The Legacy of Sleepaway Camp” comes filled with the usual anecdotes and reminiscences. As with the commentary tracks, everyone involved is proud of what they made while remaining lighthearted about its goofier aspects.

Other extras include “Judy,” a short film by fansite webmaster Jeff Hayes that follows up on Karen Fields’ bully and largely proves that it’s a blessing that ‘80s schlock at least had the entry barrier of professional shooting and editing equipment. Tiersten, now a musician, has one of his music videos bizarrely included, while the rest of the disc consists of a slideshow of behind-the-scenes photos, some more images from effects artist Ed French, a demo of the 2K scanning process, and trailers and TV spots. As with most of Scream Factory’s marquee releases, the sheer amount of effort that went into a package for a beloved relic is staggering.

One of the most compulsively watchable slasher relics looks better than ever on Scream Factory’s packed Blu-Ray.

[EDIT 05/27/14: This post has been updated to reflect an inaccuracy that stated one of the newly recorded audio commentaries was pre-existing.]