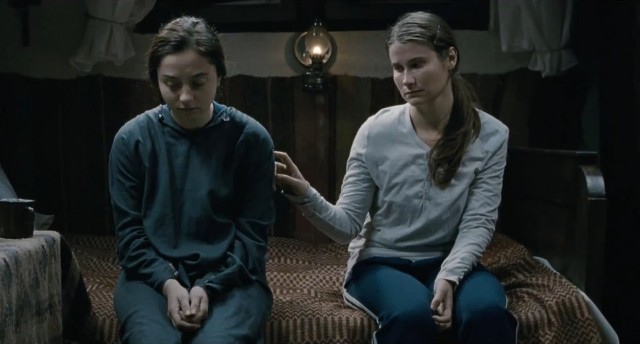 Beyond the Hills: Something Wicked This Way Comes

There’s a moment in the final act of Romanian director Cristian Mungiu’s monastery-set drama Beyond the Hills that, under the hands of any other director, could’ve been played up as something from a conventional, generic psychological horror film. But this being the writer/director behind the 2007 Palme D’or-winning 4 Months, 3 Weeks and 2 Days, the audience isn’t let off that easily. Instead, Mungiu’s camera lingers on all the film’s events, including its harrowing final act, reveling in their horror without ever explicitly pointing it out either. Much like his last film, Beyond the Hills‘s atrocities are rooted in an all too real place, committed by all too real people, and depicted in as uncinematic a fashion as possible.

Beyond the Hills takes place in modern-day Romania, but a sense of time and period is hardly ever communicated. The majority of the film is set in a small Orthodox monastery that lies beyond the hills overlooking a Romanian city, where no electronics are permitted, and members are bound by oath to cut off their connections to other people and material possessions. The film opens with one of the monastery’s nuns, Voichita (Cosmina Stratan), picking up a childhood friend of hers’, Alina (Cristina Flutur), from a long trip in Germany, allowing her to stay in the monastery with her. At first, they seem inseparable, but when the rest of the monastery residents can’t tolerate Alina’s almost heathenistic behavior, that bond is tested to the absolute breaking point.

Mungiu’s minimalist style is ever-present, adhering to the rule of only having one shot per scene and letting the drama play out organically. We end up feeling like observers inhabiting the same space as these characters, sometimes feeling like participants in the action. The dialogue and performances are all incredibly naturalistic, fitting with the fly-on-the-wall aesthetic. At the same time, when the film has to go into dark territory, the actors are able to switch to melodramatic crying and screaming at the drop of a hat. Moreover the film never loses itself in over-the-top indulgence; a difficult balancing act that Mungiu and the performers achieve with grace and subtlety.

In many ways, Mungiu’s minimalism feels just as effective at eliciting tension and horror as any conventional horror film–perhaps even more so considering Beyond the Hills is bleak in a way that contradicts the escapism of other, more traditional horror films. This could be attributed to Mungiu’s aforementioned realism. The horror in Beyond the Hills is not the product of supernatural forces, but human beings. 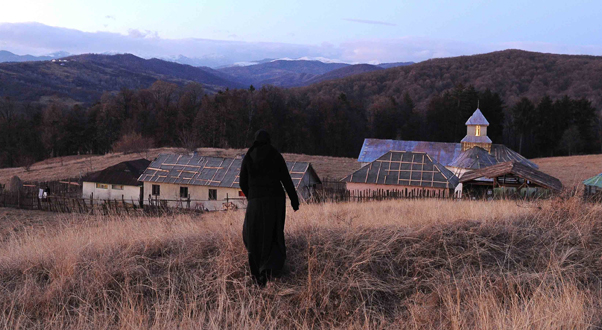 You could certainly argue that many horror films play up this idea of human atrocity, yet few commit to absolutely refusing to heighten that horror for the sake of “movie-ness” or feeling “cinematic” the way Mungiu did with this and his previous film. All of the nuns in the background are in no way contorted or manipulated in their depictions to seem more devious or evil. They’re still real individuals who operate under their own plausible logic and reasoning. The fact that these people–who are in no way “monsters” and seem to be acting in their best interests–are able to commit such heinous acts is all the more frightening because it feels like it can actually happen, and in fact probably already has. It’s the kind of horror that you could perceive living right next door from you (Or perhaps just… Beyond the Hills?).

The film can certainly be viewed as a biting critique of the Orthodox Church, or the prejudices and superstitions of religious establishments and communities in general. Indeed, while the individuals populating this film aren’t  depicted in an over-the-top, cartoonishly villainous way, they aren’t depicted in a particularly positive light either, prone to irrational thought, committing their own atrocities.

But at the same time, these critical elements can be ignored. What’s most effective about Beyond the Hills are the questions it posits about desires versus convention, the secular versus the spiritual, and the bonds of individuals versus the pressures of a community. At two and a half hours, it manages to remain endlessly compelling and thought-provoking throughout its entire running time, even when it plunges the darkest, bleakest depths of human nature.

And at the heart of all this intellectual and thematic material is the simple story of how the bond of two people can be irreparably damaged by unseen forces, some found in the people surrounding us,others found within ourselves. No matter Beyond the Hills‘s dense thematic undercurrents or harsh criticisms of religious establishments, that alone is universal.