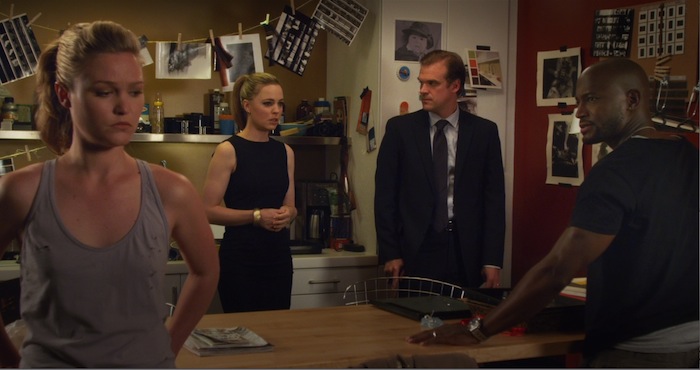 It’s tough to successfully bring stage plays to cinema. With Between Us, director Dan Mirvish (co-founder of the Slamdance Film Festival, incidentally) and writer Joe Hortua (who wrote the play on which the film is based) are clearly trying to capture a Who’s Afraid of Virginia Woolf? spirit. Like that classic play-turned-film, Between Us seeks to juice conflict out of the encounters between two different couples. But the movie is fatally, comically flawed.

The twin character pairs of the story are Grace and Carlo (Julia Stiles and Taye Diggs) and Joel and Sharyl (David Harbour and Melissa George). Over the course of two different meetings, set several years apart, they discuss marriage, life, work, sex, religion, etc. and etc. and more etc. The point of each conversation, of course, is to build to DRAMA.

The seeds are sown early in each meeting, with supposedly small lines of dialogue that might as well be accompanied by sandwich boards declaiming, “THIS WILL BE IMPORTANT LATER.” Surprise surprise, each of these couples have secrets! And resentments! And you can tell when they’re about to blow out into the open – it’s when the conversations become increasingly hurried, and characters start to talk over each other, and it builds and builds until a dramatic proclamation by whoever has something scandalous to reveal.

This movie so rigidly follows the cliches of the stage that the more serious it tries to be, the funnier it becomes. Even the intentionally small incidents that are meant to draw out underlying conflicts are limp. A shouting match is aroused by a disagreement over ordering milkshakes for a valet whom Joel failed to tip. It’s so histrionic that it almost reads as a parody of the conventions of off-Broadway theater. By the time David melodramatically unveils Sharyl’s affair with “The Brazilian,” accompanied by a flashback of said affair, which begins with a pregnant Sharyl passionately smearing paint on herself and her lover, it’s all over. The movie has collapsed into a black hole of embarrassment, like The Room, but not at that level of transcendent incompetence.

The cast is doing its damnedest to work with this material, but their sincerity accidentally feeds into the unintentional comedy. Poor David Harbour (who looks like Ty Burrell with baby fat) tries so hard in a scene where he has to bemoan his lot in life while driving drunk at an escalatingly unsafe speed, but it just doesn’t work. Each actor has a similar showcase scene that flops. None of them are bad, but they are bad together, and stuck in a bad movie.

Between Us is afflicted by “this is very obviously adapted from a play” syndrome. No amount of trying to mix up the action by bringing it to restaurants and moving cars can cover it up. The movie does nothing to justify its existence as a film. Which, in fairness, is a problem that even a lot of good movies based on plays have. But in this instance, the filmmakers’ attempt to make the story more “cinematic” includes absolutely needless shifting of time. You’d think “two meetings, several years apart” would come across easily enough on screen, but there’s incredibly confusing bouncing back-and-forth between each time period. It adds nothing at all to the story*.

This is what happens when artists with the best of intentions run up against the worst of artistic impulses. Between Us is pitifully dull – downright amateurish in some respects. It’s only entertainment value is ironic, and I don’t encourage watching things ironically.

*If this isn’t a change for the screen, and the play somehow also had this conceit, then I’m stumped. I’d kind of want to see it, though, just to watch the actors suddenly pause in the middle of a random action to completely rearrange the stage.