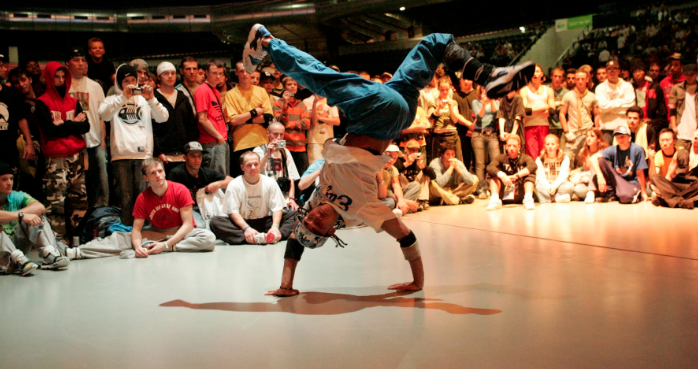 ‘Battle of the Year 3D’: The Oscar Race is Over

I am an unrepentant fan of dance movies. I’ve seen every Step Up, You Got Served, Save The Last Dance, Stomp The Yard (does that count?), and everything in between– usually on opening day. They are unquestionably predictable, unrepentantly silly, and star blandly charming pretty people who let their moves make up for the utter lack of characterization. You know exactly what you’re going to get with a dance movie… yet it’s important for dance movies to not be hyper-aware of that fact. Unless a dance movie is earnest in its approach and execution, it will fail. Battle of the Year 3D is certainly earnest in execution, sporting some of the overly-serious instant gem quotables I’ve come to embrace in the genre.

However, the approach is anything but earnest. The script seems to respect product placement above character, the editing puts dialogue on something resembling fast forward, and the camera work emphasizes the speed of the choreography instead of the grace and skill. In short, it doesn’t feel interested in making a dance movie– it feels interested in making the money that a dance movie can make. Josh Holloway tries his hardest, God bless him, but Battle of the Year 3D can’t even be enjoyed as a blissfully dumb entry in its genre; the best I can say is it b-boys its way toward “so bad it’s good.”

He funds the American b-boy squad at the international Battle of the Year event, which is represented in this film as Olympic rhythmic gymnastics but with more rap music and crotch grabbing. Dante puts this team in the hands of Jason (Josh Holloway, Sawyer from TV’s Lost), a former basketball coach who used to be the only white breaker in Dante’s crew, but as Dante puts it, when he made the team come together, “he went from white bread to Wonder Bread.” Jason is an alcoholic, which has no impact on the film until a final inspirational monologue, but it allows Holloway to look pained and swig from a flask a multitude of times.

Jason agrees to coach the team, but only if Dante allows him to do it “on his terms.” And boy, is his coaching style unorthodox! He insists on getting the best dancers from around the country! He enforces a curfew! He preaches teamwork over individual accomplishment! He occasionally yells at the guys and are tough on them! What a rebel! Some dancers, such as Rooster (Chris Brown) and This Other Guy In A Silly Hat (actor in silly hat), don’t get along.

One dancer hates another because he’s gay. A hot female (Caity Lotz) comes in to choreograph, because according to Jason’s assistant Franklyn (Josh Peck), she’s the best choreographer there is– which begs the question why no girls are on any of the b-boy teams, but I suppose the competition may take its gender label literally. Which in turn begs the question why the best choreographer of b-boying in America is a woman if such competitions are gender-exclusive, but BOTY3D has no interest in nuanced discussions of gender in the world of 21st century international breakdancing. It wants to show us individuals becoming a team. Oh yeah, and the occasional dance montage.

I say occasional, because until the finale, there are very few complete dance routines showcased in this film. We get snippets, montages, and short clips. Even in the finale, most of the dancing is chopped up and placed into easy-to-digest bits of exposition. I count three actual dance battles we actually get to witness in a film that pushes two hours. In a dance movie, this is unacceptable. Also unacceptable are the frequent amounts of cuts and rapid-fire editing within the routines themselves.

Gene Kelly and Fred Astaire never utilized Bruckheimeresque editing techniques, because they knew that we needed long takes and well-framed shots to tell the story and establish the geography of a dance number (look at the “I Won’t Dance” number from Step Up 3D for the best example of how a modern dance movie can still elevate you to ecstatic heights when the framing and editing are done correctly). Battle of the Year is content to show us quick flashes of stunts and doesn’t care about the rest. Even the most impressive trick, a blindfolded number, never wows you the way that it should due to the execution.

So the dance numbers aren’t too impressive. If we cared about the characters, this wouldn’t even matter. However, every beat is phony. Note the first scene between Dante and Jason and pay special attention to the editing. It doesn’t sound like an actual conversation; it sounds like someone took an actual conversation and cut out all of the natural gaps between dialogue to speed it up, so it feels more like a modern art video installation experiment than actual characters talking. The script also pays special attention to product placement. Actual dialogue: “What the hell is that?” “It’s the Sony Tablet! It’s the future!”

There’s also a special scene in which Dante rewards the dancers for their hard work… by buying them Sony merchandise, which the dancers respond to by saying, “A (name of device)! I’ve wanted one of these!” Even stranger than the Sony plugs are the plugs for the documentary Planet B-Boy. Franklyn exclaims, “It’s the Bible for b-boys!” and we watch Jason as he watches the film several times throughout the film, labeled with a helpful PLANET B-BOY logo in the corner of TV every time it’s on so we remember what it’s called. This would be strange in any film– I struggle to think of another movie that spends so much time worshiping another movie– but it’s elevated to absurdity when you consider Battle of the Year’s director, Benson Lee… ALSO DIRECTED PLANET B-BOY. His follow-up project to his acclaimed documentary was a two-hour terrible commercial for his acclaimed documentary. You can’t make this stuff up.

Saddest of all, Josh Holloway deserves so much better. He can handle the most ridiculous of dialogue, give it his trademark earnest charm, and carry a film on his shoulders. Anything that works in the film is solely thanks to him, and I can’t wait to see him in a leading role worthy of his talents. Anyone who saw his work on Lost knows he could be a guy with his own franchise. Casting Holloway was the one good choice made when Battle of the Year 3D was put together. Casting Chris Brown was the more typical choice: Brown plays a violent asshole who’s still lovable in his own douchebaggy way, which is kind of like hiring Mel Gibson to play a lovable anti-Semite. Despite Brown’s extra-curricular behavioral issues, he is an actor with considerable charm and presence.

Why then would they cast him in a role that is destined to immediately bring to mind all of the baggage he brings in from reality? The answer is simple: they didn’t think about what was best for him or the film, only that he’d bring his fan base to the ticket booth (he could’ve done a great job as the gay b-boy or the b-boy trying to raise his daughter, and this whole issue could’ve been averted). Battle of the Year 3D isn’t without its laugh-out-loud goofy moments, so some may still find enjoyment as they tick the cliches off the checklist. Yet I enjoy silly dance movies when they firmly believe what they’re selling: the Step Up franchise unquestionably believes that dance battles are important and can change your life. Battle of the Year 3D only unquestionably believes that people want to see dance movies, so they peddle a shoddy facsimile, selling something they’d never buy.

Final note: Josh Peck’s line, “I might be Jewish… but my religion is HIP HOP,” should win the Oscar for Greatest Line In The History Of Anything Ever.