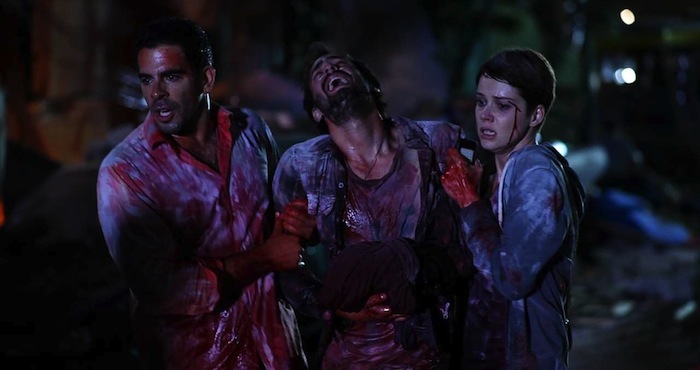 With Aftershock, Eli Roth is attached to yet another cautionary tale for oblivious tourists yukking it up in a foreign country, only to wind up in the most grisly circumstances made even more horrifying by their total lack of autonomy. The fact that Roth is producing newcomer Nicolás López’s script may explain why this is a slight departure from his norm: Whereas in Hostel some American idiots get chopped up at a brothel, here the doomed international sextet are subject to a massive earthquake that rips through the city of Valparaíso, Chile, and sets into motion a deadly chain of events. The “murderer” is the shockwaves that obliterate the bar in which these tourists party, that crack open a prison and let out actual human killers, and that trigger a tsunami warning.

Or at least, that’s what the filmmakers are hoping the audience will come away with. Unfortunately, about halfway through the movie it becomes clear that the dynamics of the story are a lot more calculated than they’re letting on. Aftershock may be about Mother Nature, but you can see the humans pulling the strings. All too soon, the movie adopts the Final Destination method of storytelling: You accept that almost everyone is going to die, so now you sit back and enjoy how gruesomely it’ll happen.

But first, let’s introduce you to the players so you can establish some emotional connection—because there are some fantastically underrated performances here. Most hilariously, Roth plays “Gringo,” a dorky, clueless American traveling with his two buddies Ariel (Ariel Levy) and Pollo (Nicolás Martínez, who may soon give Zach Galifianakis a run for his money). When they meet a trio of international beauties—bratty Kylie (Lorenza Izzo), her Hungarian half-sister Monica (Andrea Osvárt), and Russian Irina (Natasha Yarovenko)—they bring them along to Valparaíso. They’ve barely started their mating dances at the club when the earthquake brings chunks of the ceiling and shelves of vodka crashing down onto the shell-shocked inhabitants.

I will hand it to Roth and López: That sequence alone will spook any clubgoer, because it’s the kind of absurd—but not unrealistic—nightmare that could befall anyone. The six go running off into the streets of Valparaíso trying to find a cell signal and medical attention, but are quickly targeted by the escaped convicts. This cat-and-mouse chase is enhanced by the ever-present tsunami alarms and some truly engaging set pieces in a series of underground tunnels where nuns would hide their unwanted babies. (Oh yeah, it goes there.) Not for some time have I seen a horror movie that endeavors to press so many buttons. 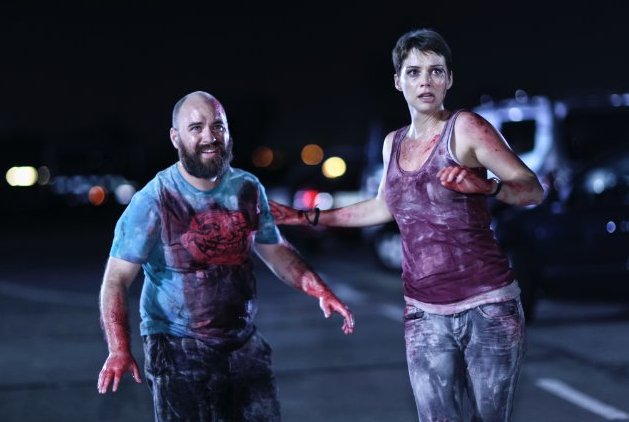 Unfortunately, you’re never not aware of this subtle manipulation. I won’t ruin the order or creativity of the deaths here, because those are the main draw for this kind of movie. But I will say that there’s amputation, immolation, and a lot of getting crushed under rubble. Oh, and the ending (which I saw coming, but others at my screening didn’t) is ridiculous in the best way.

Watching Hollywood star Roth play dorky Gringo—who gets brutally turned down by Selena Gomez in a random cameo—is amusing because you imagine it’s been a long time since he’s had to tap into that hapless persona. But the character who most fascinated me was Pollo. This affable party guy, who knows which hands to shake and which wheels to grease, gets by entirely on his father’s money and not on his looks or charm. He’s the perfect tour guide, but when the earthquake literally turns everything upside-down, he’s completely out of his element. Martínez gives one of the more nuanced performances I’ve seen in horror, moreso because you’re not expecting any emotional growth from him. By contrast, the tense, resentful relationship between sisters Kylie and Monica strikes a few chords haphazardly, but by the end of the movie their progress is moot.

Aftershock is like a long night at the club: You’re fed something questionable, you get amped up, you think it’s super awesome in the moment—but dealing with your hangover the next morning, you decide it wasn’t really worth it.