I’ve loved all of Spike Jonze’s work, but I was incredibly skeptical of Her. What looked like a story about a man falling in love with Siri, complete with him spinning in romantic circles with his phone, just seemed like too much. It was a rotten attitude to bring into the film, but I felt myself resisting it as the premise unfolded. And yet it won me over. More than that, actually – Her got me love to it.

Theodore Twombly* (Joaquin Pheonix) is a man existing in perpetual funk, despite living in a future Los Angeles that’s nigh-on utopian (and, incidentally, far more caucasian than current population projections hold). He has a romantic soul, which makes him well-suited to his job writing letters for other people (in the future, interpersonal communication has been outsourced). It also means he can’t accept that his marriage is over, and he’s been dragging out his divorce proceedings for over a year. On a whim, Theodore buys a copy of OS-1, a new operating system that’s run by a true artificial intelligence. Within a minute of activation, the OS (voiced by Scarlett Johansson) names herself Samantha and begins making Theodore laugh. As Samantha evolves and establishes an identity for herself, she and Theodore become friends, and later, strangely, something more.

Her is playing an extraordinarily hazardous high wire act of tone. When a man is looking at his phone with amour in his eyes, the risk of bathos seems insurmountable. But ninety-five percent or so of the time, the film actually pulls it off. The remaining five percent is not a horrible blight, either – it just means the movie isn’t perfect. Most of that five percent has to do with the sexual aspect of Theodore and Sam’s relationship. It plays out as phone sex but is much weirder when you consider that one of the parties doesn’t have a body. But the movie handles it with grace, and I was able to mostly roll with it. I have no idea how the moviegoing public will react to this, though, or the love story as a whole. They’ve cried for a volleyball floating away from Tom Hanks, so anything is possible.

As in all great screen romances, the audience’s investment rests largely on the shoulders of the couple in question. Pheonix is working an unreal level here. Like in The Master, he proves himself in total control of his physicality. With the help of dorky clothes and an unfortunate mustache, he fully transforms himself from a hunk to a schmo. He evinces sensitivity in a way that a hundred skinny whiteboy indie romcom protagonists could only dream of. And through most of the movie, he has to act against the air, and make the audience believe that he’s falling in love with an intangible being. He pulls it off – you never think of Pheonix speaking to someone reading lines on set. 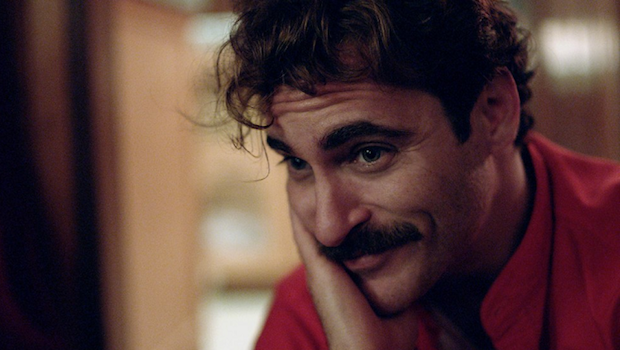 The other half of the equation is Samantha, an unheralded kind of character in mainstream film: an AI who is also a thinking and feeling being, existing only in a disembodied state. She comes into being as a blank slate, and over the course of the story, she undergoes an evolution into a real person. And she is a person, not a machine. She is self-aware and capable of the full range of human emotion, and not beholden to Theodore’s will at all (why such a being would be developed as an OS is a valid question, but without that, there’s no premise, so let’s let it go). Her preferences and understanding of the world shifts as she grows. With nothing but her voice, Johansson makes this arc recognizable, which is a special kind of achievement.

The key here is that, besides the romantic element, Her is a true-blue science fiction story. The what-if ideas aren’t there as a jumping-off point for the plot; Spike Jonze’s script fleshes out all the implications of its premise. Every question that might arise in your mind about how Samantha and other AI OS’s work is answered sooner or later. Eventually, the movie taps into some pretty heady ideas about the nature of intelligence and being, the possibility of a technological singularity, and the evolution of thought itself. But any work of art can toss around ideas. Prometheus did that, and it was awful. Her marries its ideas to its emotional core. The evolution of artificial intelligence parallels how human beings continuously grow. Theodore teaches Samantha how to be human, just as all of us are taught how to be human through our connections. Connection saves us, and connection will carry us to the next stage of our being.

All of Her is suffused with a gentle, almost lullaby-like atmosphere of melancholy. Hoyte van Hoytema, one of the best cinematographers working today (you’ll recognize his handiwork from Let the Right One In and Tinker Tailor Solider Spy), bathes this world in sudsy warm colors. It’s the antithesis of the future as ruled by antiseptic tones, with nothing but MacBook steels and whites. Arcade Fire’s score is lovely and strikes the mood of every scene perfectly. In his first solo script, Jonze demonstrates great adeptness at injecting wonderful moments of comedy. A lot of the humor is quite dirty-minded (this is one of the brains behind Jackass, remember), featuring stuff like a filthy-mouthed alien in a video game or an illustration of anal sex as practiced by hypothetical humans with anuses in their armpits. It helps the film feel human and not too heady or awards-bait-y.

There’s still so much I haven’t gotten around to talking about when it comes to Her. There’s Amy Adam’s terrifically nuanced supporting role as Theodore’s best friend. There’s the discomfortingly real confrontation between Theodore and his ex-wife (Rooney Mara, killing it with just one scene to shine). There’s a scene in which Theodore and Samantha attempt to have sex with the help of a human surrogate, which dances with so many emotional beats without ever misstepping. Her is, surely, the best movie about a man and an operating system in love ever made. It’s also one of the best films of the year. The trailers are selling it badly. It’s so much more than it appears to be, as long as you’re open to anything. Which, if you’re a good moviegoer, you should be.

*Yes, that is a horribly twee name, but it’s only said out loud like once, so you can forget and forgive it.