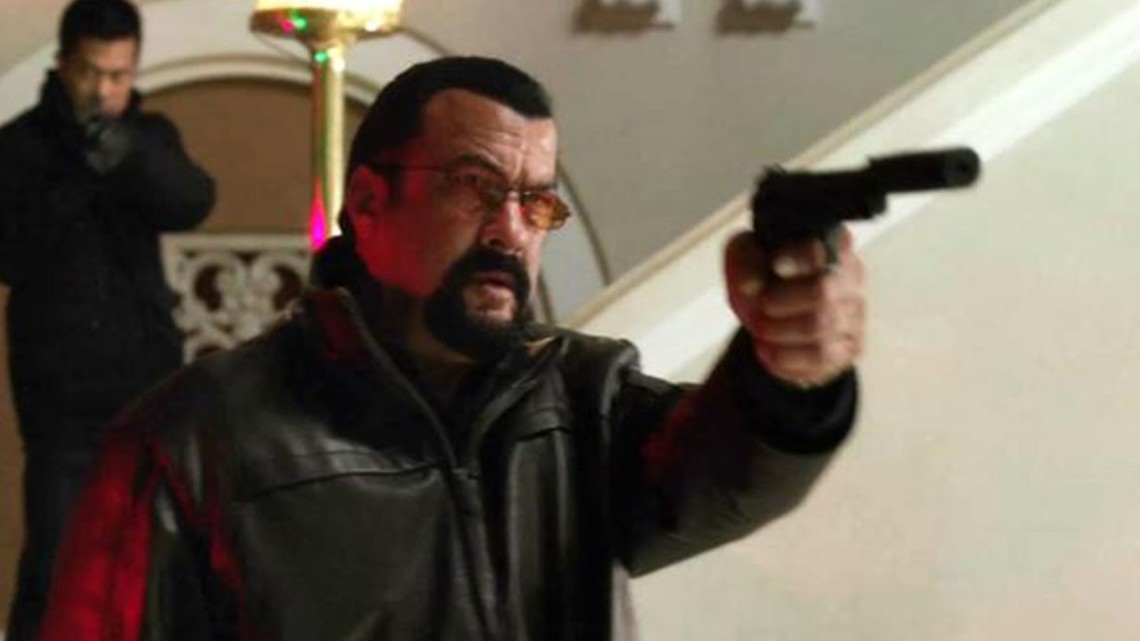 There’s an extraordinary moment at the very end of the new Steven Seagal picture, Absolution, that almost makes it worth watching. Since said moment is one of the very last shots, and sitting through this entire movie is not something I would wish upon an enemy, I feel emboldened to spoil it here. Consider yourselves warned.

You see, after all is said and done and the countless bodies are buried, we finally see Steven Seagal’s weary mercenary John Alexander relaxing at home. On the wall is a luxuriously framed and quite amazing oil painting of (yes!) Steven Seagal noodling on an acoustic guitar, wearing shades while bathed in a heavenly light.

Because of course Steven Seagal’s house would be decorated with tacky oil paintings of himself! Not since that Beethoven-styled ceramic bust of Matthew McConaughey’s head was so prominently displayed in Magic Mike have I been this convinced that an actor brought something he already had at home to the set and asked the director to include it as a prop in their movie.

But where was I? Oh yeah, Absolution. It’s bloody awful. While Seagal’s compatriots in the direct-to- video action-movie ghetto, Jean-Claude Van Damme and Dolph Lundgren, have been enjoying something of a recent resurgence, particularly with regard to a certain sub-strata of downmarket-minded critics, rest assured that Steven Seagal is still making indolent garbage.

I don’t know if you’ve been keeping up with this guy lately – and I’m assuming not because y’all probably have real jobs and kids and shit – but it’s fun checking in on Seagal every now and again in that mean way that the Germans have a word for, because the dude got really fat. Like, he’s getting Brando heavy. Everything about him is puffy, and filmmakers must go to great lengths to not make him move around much in these pictures. This is kind of a problem when you’re an action star.

I was unaware that Absolution is a technically a sequel to a 2014 movie that I will most assuredly never see, called A Good Man. Both films are directed by Keoni Waxman and star Seagal as John Alexander, a self-regarding mercenary who speaks softly and always wears bulky jackets zipped all the way up to his neck.

As action movies demand action, Seagal has a partner played by Byron Mann, who does all of the fighting. Stylish and charismatic in a certain 80’s TV-cop-show kind of manner, Mann wears cool suits and has an endearingly arrogant way of lighting cigarettes during every lull in the conversation, of which there are many in scenes with Steven Seagal.

So the gist of this thing is that Seagal and Mann are amoral mercenaries knocking their way around Ukraine, and the first setpiece finds them executing a coked-out Afghani party-boy for cash. But their post-killing revelry is interrupted by a scantily clad young girl (Adina Stetcu) who has just escaped from the kind of grisly, underground sex-torture chamber that your aunt used to read about in Steig Larrson novels a few summers ago. Waxman’s camera is less than gentlemanly, filming her flight to freedom almost entirely up her microskirt.

The young rape victim literally falls into Seagal’s lap, which isn’t that mean of a feat considering he spends most of the movie seated. On a dime, he decides he’s going to hunt down and kill whoever did this to her, “and then that will be my absolution.” (See what they did there, with the title?)

He didn’t seem particularly guilt-stricken to me, but then, Seagal doesn’t seem particularly much of anything. You pass the time during his movies now spotting how much of the performance is given by a body double – especially scenes that involve complicated stunt-work like walking across a room. Sure, occasionally he’ll stand up and break somebody’s arm, but he looks really put out about it – like the bad guys interrupted a television program he was watching.

So with Mann doing most of the fighting and detective work while Seagal looks bored making out with the sexual assault victim young enough to be his daughter, we eventually work our way up the criminal food chain to mad sex-torturer Vinnie Jones – the former footballer who still can’t believe that Jason Statham is the only one who got fookin’ famous off Lock, Stock and Two Smoking Barrels.

I think the best way to explain the level of exertion here is that Seagal spends the whole movie wearing a pair of amazingly dorky spectacles, but they’re the kind that magically turn into brown sunglasses whenever you go outside – like those old AmberVision things we used to see advertised during infomercials on late night TV.

The guy is so goddamn lazy he can’t even be bothered to put on a pair of shades.