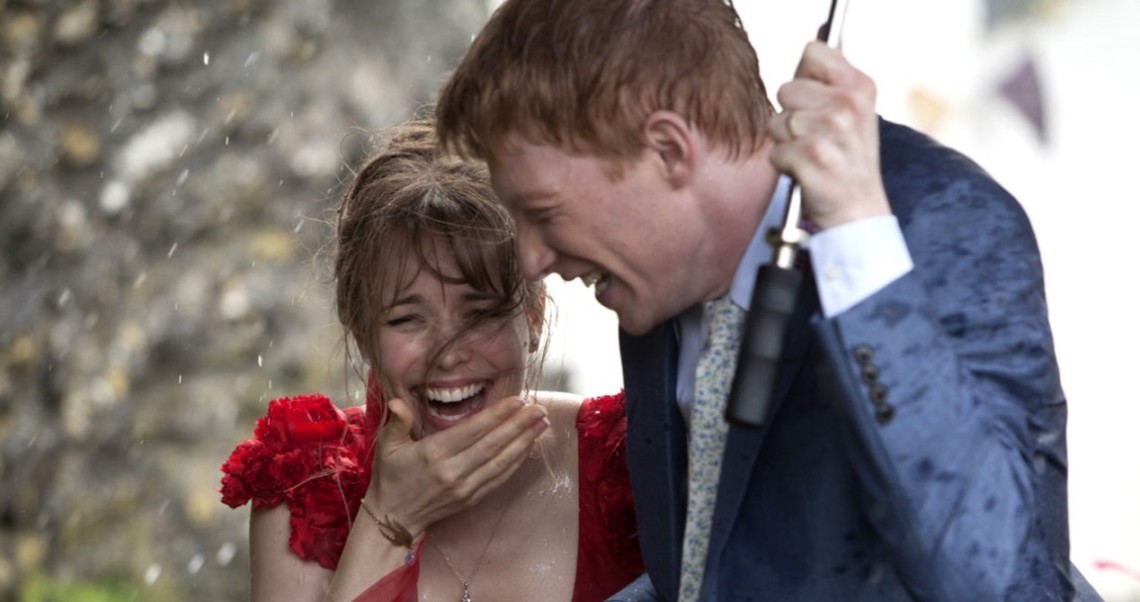 ‘About Time’ Should Have Been About Other Things

For a man who specializes in romantic comedies, writer/director Richard Curtis doesn’t seem very interested in romance or comedy. His latest, About Time, is a lighthearted tearjerker about a man who learns he’s inherited a low-tech means of time-travel, and uses it to search for the love of his life. Yet Curtis approaches the material as if the most interesting part of that scenario is the time-travel itself – the rules that govern it, the sacrifices it requires, the decision-making conflicts that would occur. This is what Midnight in Paris would have played like if it had been more interested in the mechanics of how Owen Wilson went back in time than what he did once he got there.

Domhnall Gleeson plays the boyish protagonist, Tim, a young Brit who learns that all men in his family can travel back in time by clasping their hands together. Speaking with his father (Bill Nighy, whose few scenes bring along a sense of comfort and sincerity that all the other actors fail to achieve), he makes it clear that he intends to use his gift for love: to ensure he’ll find the right woman to spend the rest of his life with.

For the rest of the first act, the film proceeds like a romcom-with-a-twist – after a few failed attempts to pick up would-be supermodel blondes, Tim meets-cute with Mary (Rachel McAdams) at a bar operated by blind employees and shrouded in total darkness. Once he gets outside and sees that his flirtation has been with a woman who looks like Rachel McAdams, he’s permanently smitten.

Tim pulls a Groundhog Day on Mary, and it’s played, quite seriously, as the moment that sparks her love: he hears her speak endearingly about Kate Moss, and travels back to say such things himself as a means of wooing her. Despite the fact that McAdams is given a huge amount of screen-time, however, About Time is not about Tim’s relationship with Mary. She’s afforded no internal life, no real interests or character details. The only time her profession – book reader – even comes up is when she’s complaining about it for dramatic effect.

The only mode for McAdams to act is “cute.” It’s telling that she’s never made privy to Tim’s abilities, and to the inherent deception: She’s a conduit for genre standards like romance and marriage and children, but she’s not a human being with feelings. She falls for Tim and her devotion is never questioned, even as his eyes – and ethics – waver. Mary is a dreadfully uninteresting genre standard: a woman as impossibly non-threatening as she as she is impossibly attractive. The relationship is left less plausible than the time-travel.

About Time regularly deviates from Tim’s life with Mary to facile philosophizing about the abilities and how they work: i.e., what if you could save your sister from a horrible accident, but lose your child’s identity in the process? Would you sacrifice your first date with your wife to aid your best friend in his career? It ends up playing like a feature length version of the “Would You Rather?” parlor game.

It’s only made worse by the fact that the “rules” themselves, laid out with precision, never make sense. Tim is told only the men in the family can time-travel, but later he takes his sister with him. He learns he’s not allowed to travel back past the birthday of his own children, until a scene where he and his father do so to no ill effect. The movie isn’t spinning its wheels, but it’s making things up as it goes along.

Everything is wrapped up with a closing voiceover that plainly states the themes in an attempt to tie together all the disconnected narrative strands: Tim’s eventual devotion to Mary, his loving relationship with his father, his troubled one with his sister, and his eventual realization that time is best enjoyed at its normal pace. It’s a reminder of just how scattershot the picture’s interests are, how plainly it fails in most of its efforts. It wants to be more than a romantic comedy, it wants to be a meditation on time, and perspective, and family, and love. What it ends up being is none of those things, just a genre exercise with moderately insidious sexual politics and a thoroughly confused focus on the inner workings of its own plot. Cinema is supposed to seem effortless – this is anything but.

One thought on “‘About Time’ Should Have Been About Other Things”