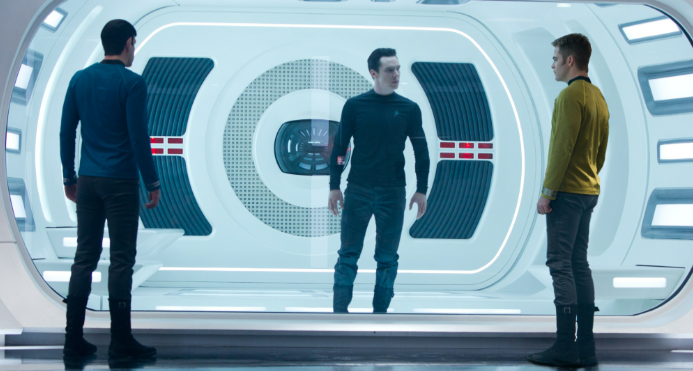 J.J. Abrams’ Star Trek films are not the worst examples of Hollywood’s risk-reducing homogenization of its populist entertainment, but they may display this worrying trait most visibly for what they chuck out of their source material. As a property, Star Trek is entirely too idealistic for our time. Hell it was often too idealistic for its own time, in ways positive (its passionate drive to put people of color in meaningful roles) and negative (its naïve utopianism, its reductive stereotyping of aliens in ways that undermined aspirations of racial respect).

Blockbusters now are about cynical hotshots who trade reflection for quips and organic self-discovery for a rigidly scripted three-act structure of debasement and redemption, and Star Trek Into Darkness rushes to fit in with that crowd. But the good and bad disconnect of Star Trek from everything around it makes Star Trek Into Darkness’ assimilation into trends so disappointing on its face that one almost overlooks the sloppily assembly its appropriation of the norm.

Like its predecessor, Into Darkness represents a curious inversion of the usual path of artistic license in adaptation. It retains all the nitpicky detritus around the core of the material (albeit sanded down to the point that even non-viewers might catch the references) while jettisoning the fundamental elements. Thus, sights of Kirk making it with alien chicks and Tribbles abound, but Gene Roddenberry’s vision of a future that prizes brains over brawn is ignored in favor of boisterous action and a seeming pride in its lack of thought. “I thought we were explorers,” Scotty (Simon Pegg) protests as Kirk casually has the Enterprise outfitted for war, speaking on behalf of fans. But then, when the film opens with a flippant violation of Starfleet’s unbreakable law, the Prime Directive, those who expected to see something at least tangentially related to a franchise they love have likely resigned themselves by this point.

So if this Star Trek film does not have much to do with Star Trek, what do we make of what it is? One aspect of Into Darkness’ update is, in theory at least, a welcome alteration. Into Darkness takes twists and turns into militarism that digs into domestic politics Roddenberry rarely permitted his writers to touch, convinced of our assured unity in the face of interstellar exploration. Peter Weller appears as a Starfleet admiral whose eagerness to take the fight to harassing Klingons prompts him to take deceptive routes to get his way, adding an element of intrigue that could force humans to earn Roddenberry’s misty-eyed view of them.

But that setup is couched in yet another dreary appropriation of 9/11 imagery, so banal and overplayed at this point that it comes as a small worry how inoffensive such replications have become. Terrorist attacks are used to justify swift, unthinking military action, but this potentially rewarding, if not exactly freshly trenchant, commentary on the United States’ handling of 9/11 is spoiled by a script that is not content to settle for any one thing and eventually ties those attacks to a more insidious false flag operation. When that occurs, whatever the film has to say the nature of terrorism and its response will only hold inspire the Loose Change.

Like any other traces of deeper ideas that occasionally begin to rise to the surface of this film, the political commentary contained in Weller’s jingoistic admiral is torn apart by an almighty focus on narrative movement. The privilege Abrams places on the story could be seen well in advance of the film’s premiere in the tedious veil of secrecy regarding Benedict Cumberbatch’s character, who is, by the way, exactly who you thought he would be. To keep his character’s identity under wraps only highlights how little characterization and motivation there is to the villain, entrusting all his impact to Cumberbatch’s mellifluous voice and the audience’s awareness of the character from a previous movie.

That reliance on some passing familiarity with the characters owing to past entries in the franchise extends to the film’s treatment of the Enterprise crew, all of whom are as thinly sketched as the first film, if not even less tangible as living, breathing people. Chris Pine’s Kirk continues to have the maturity of a 12-year-old, despite his ostensible growth in the first film.

Zachary Quinto’s Spock fares better, if only because Quinto infuses neutral lines with a certain melancholy, but he too does not get to build on the seismic events that affected Spock in the first film, his development limited to one poignant discussion of how he has reacted to his home world’s destruction and one meaningless inversion of the most iconic image of the Star Trek films that takes a piercing moment and reduces it to farce.

But at least the two of them get to do something, for the remainder of the Enterprise crew might as well be red shirts. Simon Pegg and Anton Yelchin show up just long enough to mug for laughs with bad accents, while John Cho gets one brief set of lines just to remind everyone that Sulu exists. Zoë Saldana’s Uhura stands out as even more limited than Nichelle Nichols’ original, a part hemmed in by social and executive restrictions. Saldana spends the film’s first section huffing over Spock’s coldness, but once that conflict is resolved with a few lines, her screen presence consists of holding her hand to her mouth in shock. (If she did it any more often, you might think she was pregnant.)

Of all the mishandling of the film’s treatment of its source, the reductive material given to its two prominent people of color (not to mention the outright whitewashing of a crucial part) is the most dismaying and cynical. Roddenberry foresaw a future without racial prejudice, but in terms of screen depiction, things are worse for some of his creations not even 50 years later.

That slide backward is what disappoints so bitterly about Star Trek Into Darkness. Star Trek is very far from a perfect creation, and there is so much room for new stories to be told within its framework. But J.J. Abrams and his writers (the abysmal team of Roberto Orci, Alex Kurtzman and Damon Lindelof) do not expand Trek, nor refashion it, nor critique it. They simply ignore it, save when they drop a reference in a condescending display of fan lip service.

The action is blurred into monotony, making the common blockbuster mistake of entrusting the size of a setpiece, not its visual assembly, to stand out. Literally and thematically, Star Trek Into Darkness is suffocatingly Earthbound, a failure not in its inability to adhere to Gene Roddenberry’s imagination but in the lack of any imagination of its own.