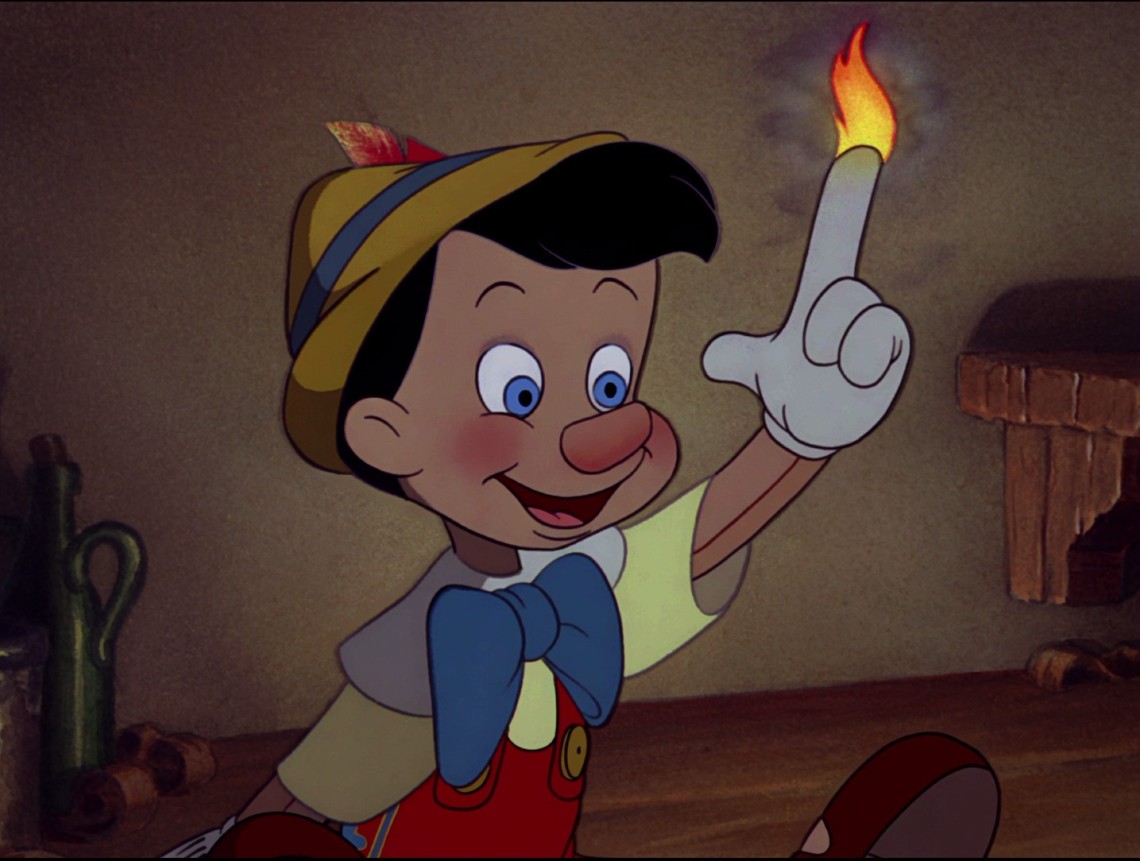 A solitary old man lives in an Italian village, spending his waking hours working on all manner of wooden creations, from cuckoo clocks to marionettes. He is awash in loneliness, maintaining relationships with his pet goldfish and cat, the latter of whom he not-so-playfully treats as a servant. A hole rests at the old man’s core, one that cannot be filled by a flirtatious fish or a grumpy cat, so he builds a marionette to represent the son he never had. Then—because what do you have to lose when you’re on your own?—he wishes on a star that his carefully crafted little wooden boy could become flesh and blood. The old man lives in a world where domesticated animals respond to human speech, where a talking insect gazes upon such crippling solitude with pity and world-weariness; thus, Geppetto’s wish is granted by a woman so beautiful she glows. But his dream will never become fully true unless his “son” proves its humanity by going deeper into the heart of darkness than any human ever has.

Pinocchio, the greatest, most terrifying film in the Walt Disney Animation Studios canon, celebrates its 75th anniversary this week, so let us now marvel at this picture, brimming with conflicting emotions and indelibly frightening images. Speculative though it may be, this film could not be made in the present except in a bastardized shape. While many of its elements are hallmarks of the animated-film template—talking animals, catchy tunes, a climactic battle with a larger-than-life monster—the execution is pricklier, harsher, and more defiantly ambiguous than what we associate with the Disney brand.

Pinocchio’s blend of cynicism and hope echoes the era in which it was released. The darkness, in Jiminy Cricket’s initial attitude as well as the variously horrible characters Pinocchio encounters on his journey, is reflective of the United States’ impending entrance into World War II, which had a major impact on Disney’s output in the 1940s. The lightness, in Pinocchio’s indomitably winning spirit and eventual triumph, is connected to the Great Depression finally, mercifully winding down (in part because of the job creation fueled by the U.S. entering the war). The manner in which these themes play out in the story of a chipper boy made of wood is a stark contrast to many Disney films, specifically its post-WWII filmography. Films like Peter Pan and Cinderella may feature similar morals that cut through the darkness (the death of childhood or the absence of freedom), but do so with little doubt or skepticism. And although Jiminy Cricket is as much an icon as Tinker Bell or Mickey Mouse for the Walt Disney Company, he’s complexly dimensionalized in his first incarnation (recall that Tinker Bell was once shrewd, self-centered, and incurably envious, not just a pixie-dust-sprinkling sprite; and that in early shorts and comic strips, Mickey Mouse was an excitable but mildly arrogant and clever Indiana Jones-esque adventurer). 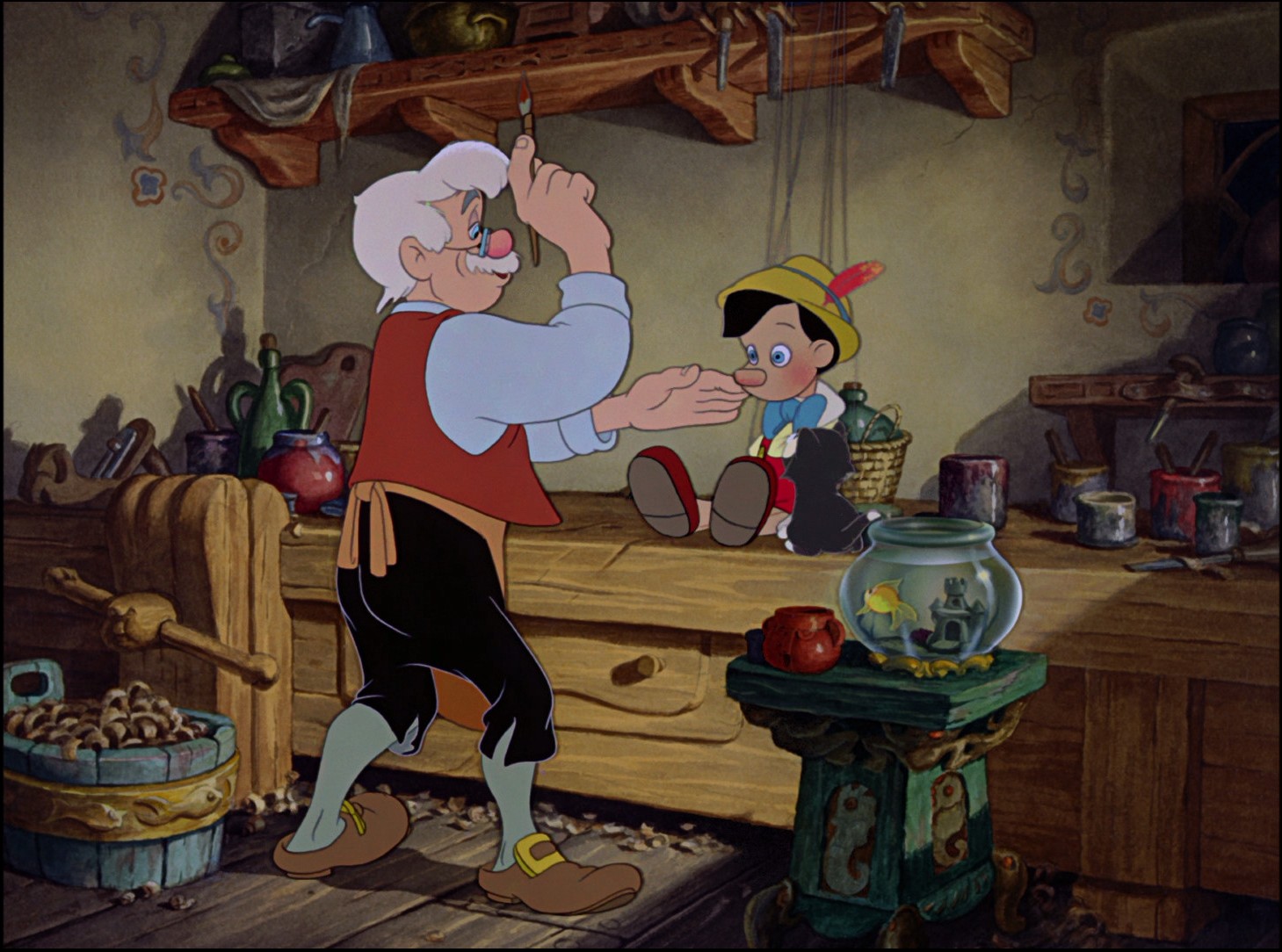 Jiminy, as much a central figure in Pinocchio as the eponymous child, represents a logical counterbalance to Pinocchio’s boundless enthusiasm. While he narrates the story from the future, having earned a gold badge of celebratory conscience as well as fancier duds, Jiminy is presented at the outset as a snappish bum, with patchwork, rundown clothing and a less-subtle inner desperation than Geppetto’s. Pinocchio may take place in an Italian village in the 1800s, like the Carlo Collodi source material; however, Jiminy, voiced by the distinctly American-sounding Cliff Edwards, walked right out of a Hooverville (the name for Depression-era shanty towns).

Jiminy is the antidote to Geppetto’s excitement at completing Pinocchio, at the possibility of his “little wooden head” becoming a real boy. He is the skeptic, even when faced with the luminous Blue Fairy. And after she bestows upon him the role of Pinocchio’s conscience, he quickly proves to need one just as badly; his temper matches his tiny stature, and he’s as tempestuous as the nefarious Stromboli. The only difference is that Jiminy’s rage is borne of emasculation and a lack of control, whereas Stromboli’s fury is a result of controlling his small domain. Jiminy storms off when it gets rough, passively and grouchily tagging along for the ride when Pinocchio again abandons the righteous path of schooling to spend time at the orgiastic playground Pleasure Island. Jiminy’s tantrums are informed by his immediate failure at steering Pinocchio towards goodness and purity. But Jiminy’s no saint, leering after the figurines on Geppetto’s clocks during the first act. Pinocchio gains his humanity totally on his own, because Jiminy is unable (or unwilling) to stop him from giving into temptation, not the other way around.

To be accepted as a human, Pinocchio must stare into the bleakness of our condition, swayed by cruel, selfish and vicious figures, none of whom receives any comeuppance. Here is the truest and most discomfiting part of Pinocchio: No matter how much the little wooden boy changes, his inner goodness is matched by literally no one he meets outside of Geppetto’s house. Honest John, Stromboli, and the unnamed coachman are all intimidating examples of masculine authority who evade capture. (Honest John’s scared reaction to the coachman growling that the children he lures to Pleasure Island never “come back as boys” may seem a strange attempt to humanize him, yet all it does is emphasize that the coachman is a rung up the ladder of evil.) The characters who do receive a terrible, unresolved punishment are the Pleasure Island boys, primarily personified by Lampwick, an abrasive child playing at being an adult. The face of suffering in this film is solely adolescent, or would be, if the children who are magically transformed into slavish donkeys still had their human faces when Pinocchio and Jiminy finally grasp what’s going on at this bacchanal. 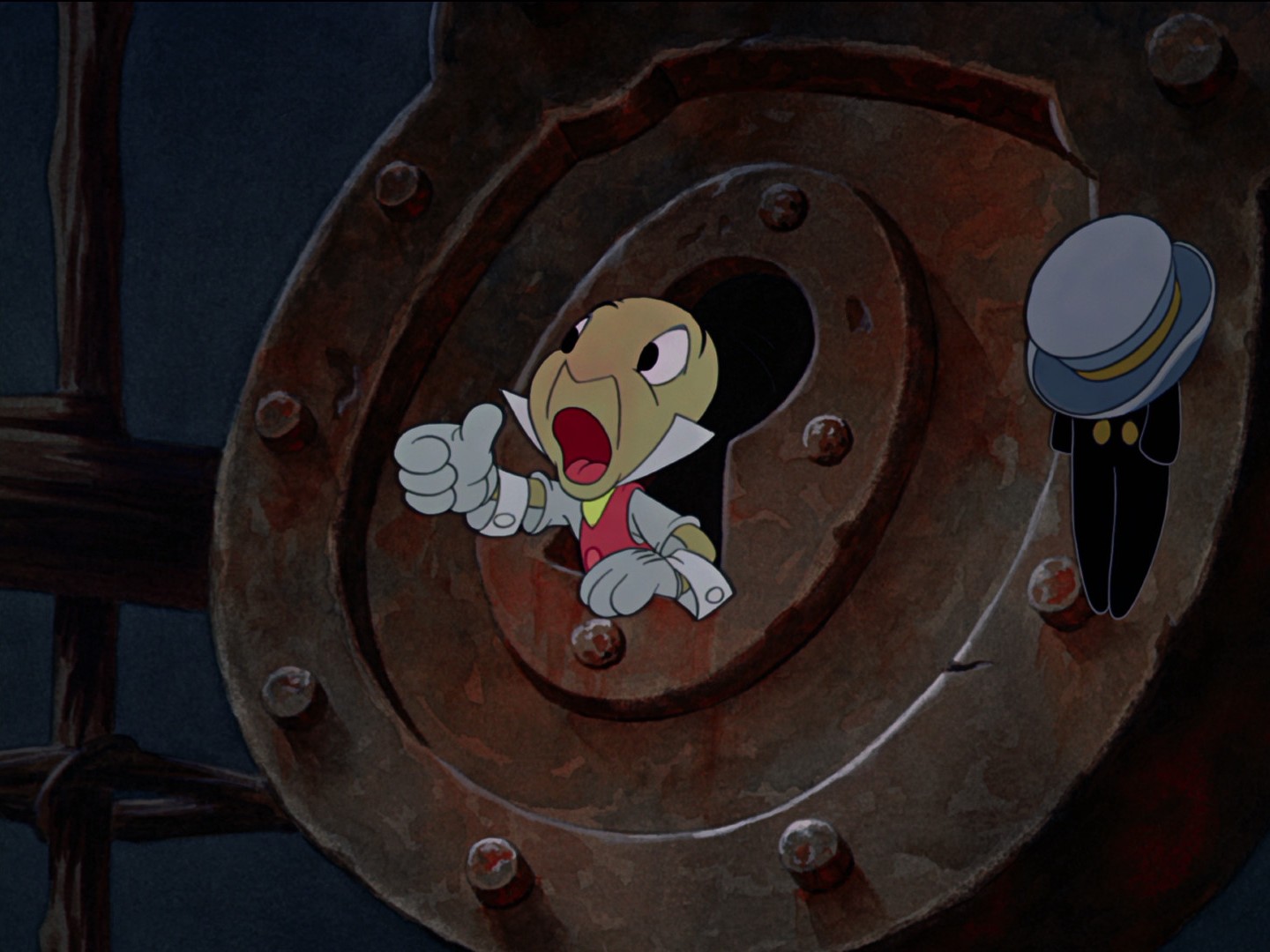 Pinocchio is a successful high-wire act not only because its ambitions as a horror film for children are met, but because the visuals are able to match the storytelling. If Snow White and the Seven Dwarfs proved that making a feature-length hand-drawn animated film that the entire world could embrace was possible, Pinocchio proved that its predecessor was no fluke. The 1937 film’s technical achievement, encapsulated in the innovation known as the multiplane camera, is expanded upon here, as in shots where the subjective camera peers over a rooftop in the middle of town, spying on Pinocchio, Honest John, and Gideon as they sing and bounce along to “Hi-Diddle-Dee-Dee (An Actor’s Life For Me),” the cobblestone road and building walls moving as fluidly and smoothly as they do.

Such mastery is present as soon as the opening chords of “When You Wish Upon a Star” begin, at once sentimental and oddly haunting, all the way to the triumphant finale. The film also features some of the most iconic images in the Disney filmography: Monstro attacking our heroes, Pinocchio gleefully learning how to contort his body in the middle of a joyous performance, the Blue Fairy appearing from thin air to bemusedly confront the little wooden boy and his weak-willed conscience in a cage, and even (or especially) Lampwick changing into a donkey in front of a horrified Pinocchio. Snow White and the Seven Dwarfs created the template for feature animation, but it was Pinocchio and its portrait of loneliness, avarice, cruelty, and the struggle against adversity that revealed how mature and inventive the medium truly could be.