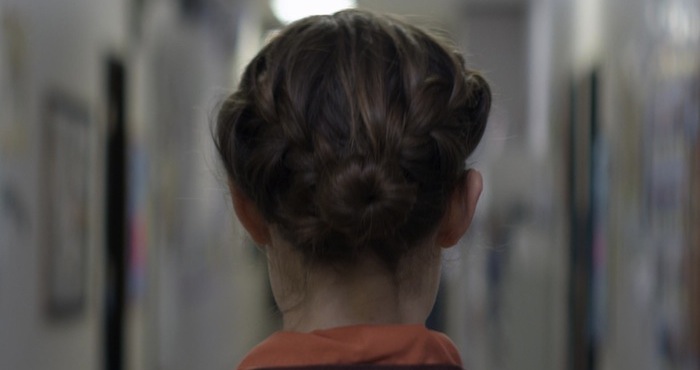 ‘A Teacher’: A Queasy Kind of Love, Handled With Grace

This review was originally part of our Sundance NEXT Weekend coverage.

Female high school teachers having affairs with male students has long been the object of lurid tabloid attention and melodramatic movies of the week. But A Teacher takes a reserved, contemplative approach to this sensitive topic. It’s a whisper-quiet work about a character who could use a good scream of catharsis.

Diana (Lindsay Burdge) is a literature teacher who’s been having sex with Eric (Will Brittain) for some time. When she’s with her young lover, Diana is at peace, but the rest of the time she’s wound like piano wire, both because of the strain of hiding the affair and some vaguely hinted-at emotional issues. The story floats in ambiguity — we don’t know who initiated this relationship, nor how long it’s been going on. We don’t know what caused Diana’s recent move to this new area and school. We don’t know what her brother is attempting to get her to open up about when he comes to visit (she refuses to engage the subject, leaving him in a huff). The film is a brief portrait of this woman’s life at the tail end of a crash caused by serious irresponsibility.

The movie feels even shorter than its 75 minute run time, as it’s segmented into isolated scenes that almost feel like vignettes, each separated by fade-in-and-out bookends that feel exceptionally foreboding. The cinematography is dark, with even the light of a clear Texas sky seeming overcast. A Teacher knows that the audience is counting down the clock to the discovery of the affair, and plays on that sense of dread for all it’s worth.

This is a tricky act, a film that plays with a familiar story without playing up any of its exploitative elements. There’s a lot of repetition, like a visual refrain of Diana jogging as if she can outrun her problems. Sometimes it gets to be too dull, as if the movie would be better off as a short. But Lindsay Burdge ably steers this ship. More than anything else, she’s A Teacher‘s saving grace.

Watching the movie is a prolonged experience in cringing, as Diana continues to dig her own hole. At each turn, from indulging in increasingly risky trysts to sending Eric a nude text, she doubles down on bad decisions instead of coming to her senses. It soon becomes evident that this relationship is causing her to regress emotionally, and watching her moon over a teenage boy as if she’s still a teenager herself is deeply uncomfortable. Which is the point, of course. The film unwinds the fantasy of the student-teacher lovers, de-eroticizing it by presenting the kind of people who would indulge such a fantasy in reality. Diana isn’t quite sympathetic, and we aren’t asked to understand or forgive her transgressions, but Burdge inspires a deep sense of pity for her, if not empathy.

A Teacher is a starkly bitter antidote to the basic cable movies-of-the-week that have traditionally been made about teacher-student affairs. I don’t know enough about the subject to say whether the film is responsible in its depiction. There’s an argument to be made that the movie might be taking statutory rape too lightly. If the genders were reversed, the movie would likely inspire outrage for its refusal to condemn the main character. But then, it’s cinema’s job to challenge us, and this is first and foremost a character study of brokenness. In that respect, at least, it is mostly successful.

A Teacher is on VOD today, and will be released in theaters September 6th.