“A Haunted House 2”: Better Than The Original, Worse Than Everything Else

“This bitch heavy as hell, cuz!”

For Marlon Wayans’ first installment in the A Haunted House franchise, I detailed fifty examples of “humor” contained within the parody. As the inevitable sequel began with the above quote, it was clear that A Haunted House 2 would decline Robert Frost’s advice and take the comedic road most traveled. If Marlon Wayans frantically humping whichever woman or object is in front of him is your idea of comedic bliss, this film will be your Valhalla, but if watching that for an estimated ten-to-twelve minutes of the film’s eighty-seven minute run-time (not an exaggeration) doesn’t tickle your funny bone, I would go see something funnier, like The Grand Budapest Hotel, Draft Day, or Sophie’s Choice. I’m not going to a Wayans sequel expecting sophistication and refinement, mind you… but actual genre parody and/or wit would have been nice.

We begin after the original events, with the sounds of Malcolm (Marlon Wayans) moving his possessed girlfriend, Kisha (Essence Atkins), into the car of his cousin, Ray Ray (Affion Crockett, a pit of despair where laughter goes to die). Ray Ray laments that Malcolm won’t join him in a “finger gang bang” of his unconscious lover, and later offers to “pistol whip that bitch” to keep her quiet. Are you laughing yet? A year later, Malcolm is moving in with his new girlfriend, Megan (Jaime Pressly). Her daughter Becky (Ashley Rickards) is a promiscuous young lass, eagerly called a whore by Malcolm, her new father figure. Her son, Wyatt (Steele Stebbins), has an imaginary friend named Tony– and anyone who’s seen a Paranormal Activity film knows where that is headed. At one point, Wyatt is having a tea party with Tony, and Malcolm, weirded out, asks, “Wanna do something more masculine, like football?” Later, Wyatt is seen trying on his sister’s clothing, a clear sign that he is haunted, because, as Marlon Wayans taught us time and time again in the first movie, gay people are apparently the tool of the Devil. Malcolm watches and utters, “What kinda sweet tooth fairy is this? This n*gga need a daddy!” If science has taught Marlon Wayans anything, having a father is a surefire way to prevent any and all young men from becoming gay.

Luckily, the homophobia stops there, and we aren’t subjected to the constant belabored pleading of Wayans to the other characters (and the audience?) that he isn’t gay. We also aren’t subjected to the tacky attempts at rape humor to which the first film subjected its viewers. In the sense that it doesn’t rub our faces in horrifically backward-minded modes of thought, the film is an improvement upon the original (there’s your pull quote!). Fans of the first film shouldn’t be completely disheartened, as the first film’s misogyny has been brought back in full force. They can’t depart too far from a successful formula. There’s even a joke equating white people’s responses to the words “bitch,” “ho,” and “slut,” to black people’s responses to the N-word. Perhaps this is Wayans’ response to criticism of the first film? Shortly thereafter, a character points out that he defended Chris Brown’s assault of Rihanna, because “the bitch hit him first.”

Another carryover from the original film is Wayans’ manic desire to stretch a joke over as much run time as possible, as if afraid that the script won’t otherwise cover enough clock to be considered a feature. To give you a small taste, in an early scene, Wayans does an impression of “sistas” upset that he’s dating a white woman. This impression goes on for nearly thirty seconds, and if you think that’s not a long time, count thirty seconds aloud right now wherever you are. Shortly after this, his dog is crushed by a giant safe being lifted into the sky. Wayans then screams (high-pitched, naturally) while contorting his face in a manner that would make mid-90s Jim Carrey say, “Ease up, big fella.” This screaming goes on for I would guess thirty to forty-five seconds; I was trying to keep track but I lost count. Immediately following this is a funeral for the dog, in which Wayans resumes screaming. I thought to myself, “Twenty bucks says he throws himself on top of the grave, asking the Lord to take him instead.” I owe myself a Jackson. 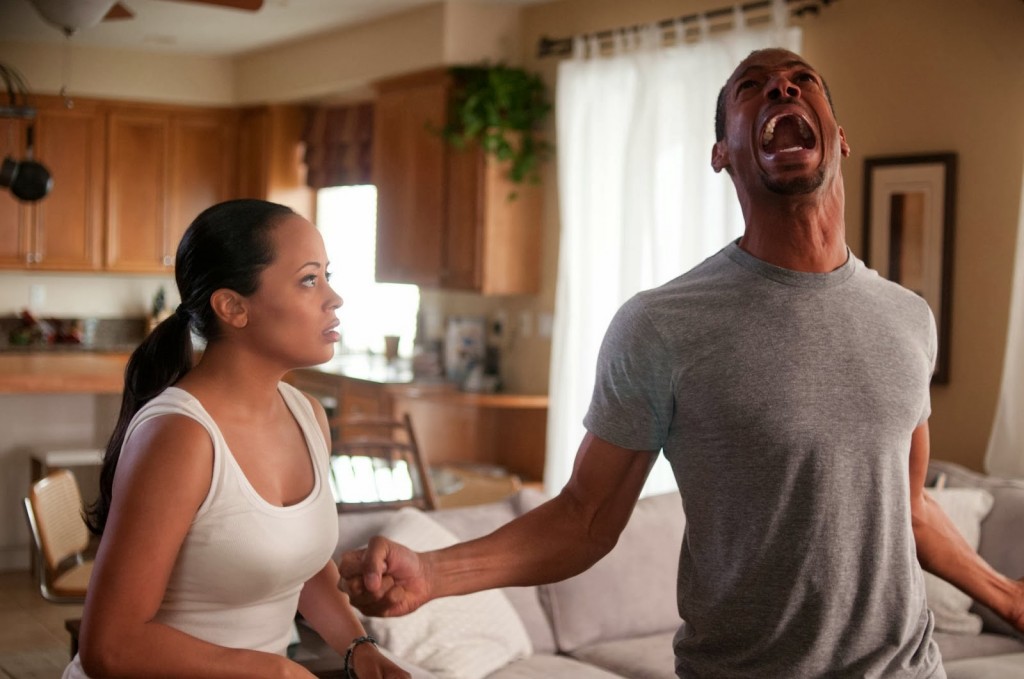 Matt Zoller Seitz made a compassionate plea to film critics to discuss form in their reviews, and I couldn’t agree more: all films deserve to have their form discussed and thought through, even if the filmmakers themselves seemingly failed to do so. The first A Haunted House did its best to stick with the “found footage” set-up it was attempting to parody from the Paranormal Activity films. While it cheated at times by creating impossible practical camera angles (most films in this genre do), its low-budget production design still kept it within punching distance of the films it was attempting to mimic. The sequel attempts to remain “found footage,” by (and I wish I was kidding) having its characters half-assedly hold phones and cameras during many of the scenes. When they cut to reaction shots presumably filmed by these characters, the placement of the camera is in no way close to where we’ve seen these characters arbitrarily wielding their technological props, but hey, it’s the thought that counts! It doesn’t parody the found footage style, nor does it employ any sense of wit with the camera — at no point does a character set the camera down when something bad is happening, no bad guys ever play with or manipulate the camera, and occasionally they forgot to even have characters holding phones. At one point, Wayans places a camera inside of the toilet and smiles, but thankfully we’re spared that footage in the final cut (don’t worry, we do get Wayans squatting and defecating on camera later).

The found footage is also totally ditched when the movie slips into pure parody territory, mimicking the cinematography and timing of the original scenes they’re mocking; these are genuinely the high points of the film. The Sinister parodies authentically look like the home movies from Sinister, from the shot composition to the timing of the cuts, which gives an air of authenticity to the set-up and makes the punchlines more effective. When Wayans isn’t trying to focus on strained jokes about sex and race, he can actually establish individual scenes of parody effectively. The punchlines may not always hit, but the potential for a better movie is occasionally spotted. We also gets parodies of Insidious, The Conjuring, and The Last Exorcism Part II, which no one will get, but it creates an excuse for Kym Whitley to briefly enter the film, so all is temporarily forgiven. The film also takes on The Possession, which is unfortunately primarily used for “box” double entendres, but it creates the best pure parody gag, in which Wayans takes a vacuum cleaner to the moths filling the daughter’s room. It’s a simple joke, not strained, not attempting to shock, but instead focusing on replicating the original scene from a technical standpoint and giving it a silly twist.

It’s not easy for Marlon Wayans to refrain from straining, however. This is a guy that takes a simple pratfall — he steps on a toy firetruck and slips — and blows it in execution. It’s not enough to Wayans for him to fall; he has to fly high into the air and land screaming like a girl. He is straining so hard to be liked, even a joke about being old (he tells the daughter, “You can Instatweet that on your Gram-o-Vine!”) feels like he’s trying too hard to appeal to the youth. There’s a tangential, lengthy Kardashian conversation that, legitimately, comes out of absolutely nowhere. It doesn’t help that the film dedicates several jokes to dated references, like Marilyn Manson, Boyz N The Hood, and Fatal Attraction; Wayans wants to shoehorn jokes that would’ve killed in his glory days into a film whose target audience will have no idea what “She’s going to boil a rabbit!” means. Wayans can be a gifted performer, both dramatically (Requiem For A Dream) and comedically (Don’t Be A Menace…). However, his desperation to milk laughs, stretching every facile joke well past its breaking point and embellishing every choice he makes to an embarrassing degree, reflects poorly on his own judgment as the creator and star of this franchise. He’s killing his own potential, screaming his way into comedic oblivion. It’s only appropriate that the last shot of the film is the camera zooming down Wayans’ open screaming mouth, plunging us forward into darkness.