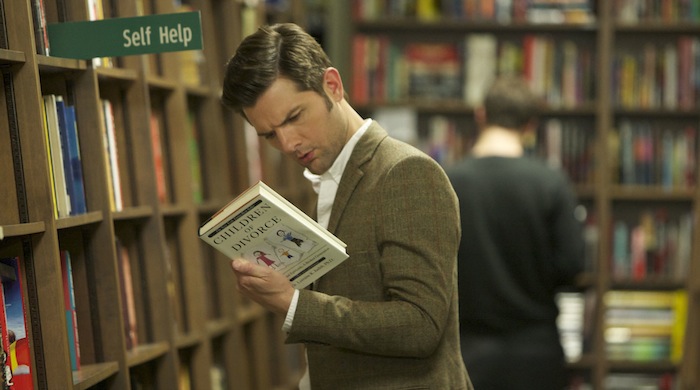 As many a concerned editorial from the past few decades or so has pointed out, around half of all marriages in America now end in divorce. There are a good deal of films about divorce, and a good deal besides that which focus specifically on the effects that divorce has on the kids involved. But what happens in the long term to those kids? How does seeing their parents’ relationship fall apart affect how they act in their own relationships? This has been in the background of many entertainments made about members of Generation X and onward, but rarely has it been addressed so directly as it has in A.C.O.D.

A.C.O.D.s are Adult Children of Divorce, and they are, as Jane Lynch’s Dr. Judith puts it, the least-parented generation ever. One such A.C.O.D. is Carter (Adam Scott), who seems mostly well-adjusted. He’s managed to keep the peace in his family for 20 years by ensuring that his mother Melissa (Catherine O’Hara) and father Hugh (Richard Jenkins) stay completely out of each others’ ways. But when his younger brother (Clark Duke) gets engaged, he hesitantly gets them together, hoping that everyone can be there for the wedding. But to his shock, getting Hugh and Melissa together results in them “getting together” romantically again. At the same time, he learns that Dr. Judith, whom he thought was his childhood therapist, was actually interviewing him as part of a study on children of divorce. Now she’s running a new study on A.C.O.D.s, and her sessions with Carter show that his life isn’t as stable as previously thought.

A.C.O.D. has a stacked cast in its arsenal. Besides the aforementioned players, it also features Amy Poehler as Hugh’s new wife, Mary Elizabeth Winstead as Carter’s girlfriend, and Ken Howard as Melissa’s husband, among others. The fact that the movie wastes most of them means that its overall sense of average-ness is very disappointing. Most of the actors default to their well-worn comedic personae. Scott is a straight man with a neurotic twinge lurking beneath. Lynch is loopy but supremely confident. Duke is sweet-natured but a bit lost, mentally. It’s no coincidence that the liveliest actors are the ones stretching outside their comfort zones. Jenkins is the diametric opposite of his low-key type here, an unrepentant horndog with an immense streak of immaturity. Both Hugh and Melissa are beings of id who have left all burdens of responsibility on their elder son. Were the movie more interested in connecting those emotional dots of parental action and child reaction, it would be better for it.

The story is juggling too many fiery chainsaws at once. There’s the parents’ relationship, Carter’s meetings with Dr. Judith, Carter’s travails with his girlfriend, the planning of the wedding, and even some drama with a struggling restaurant, and it’s all punched into a conventional plot layout. No idea feels fleshed out, no character unveils that much of themselves, and nothing comes as much of a surprise. There is a reasonable number of laughs, and the film checks off all the boxes it needs to so as not to be incomplete, but it carries no emotional heft.

The sole interesting aspect of A.C.O.D. is how heavily it plays on the joke of other characters upbraiding Carter for behaving as a normal human being would in his situation, such as being outraged at his parents’ wanton disregard for the feelings of anyone but themselves. After a certain point, it seemed like the audience is also meant to cast judgment on his lack of chill. And yet a moment of near-infidelity (part of a plot thread involving Jessica Alba that probably could have been cut without being missed) goes mostly without comment and completely without consequence in the plot. It speaks to the film’s general thoughtlessness.

A.C.O.D. is harmless, and ephemeral as a Snapchat message. It’s just a shame that the movie wasn’t better, given the cast and thematic material that it had to work with.