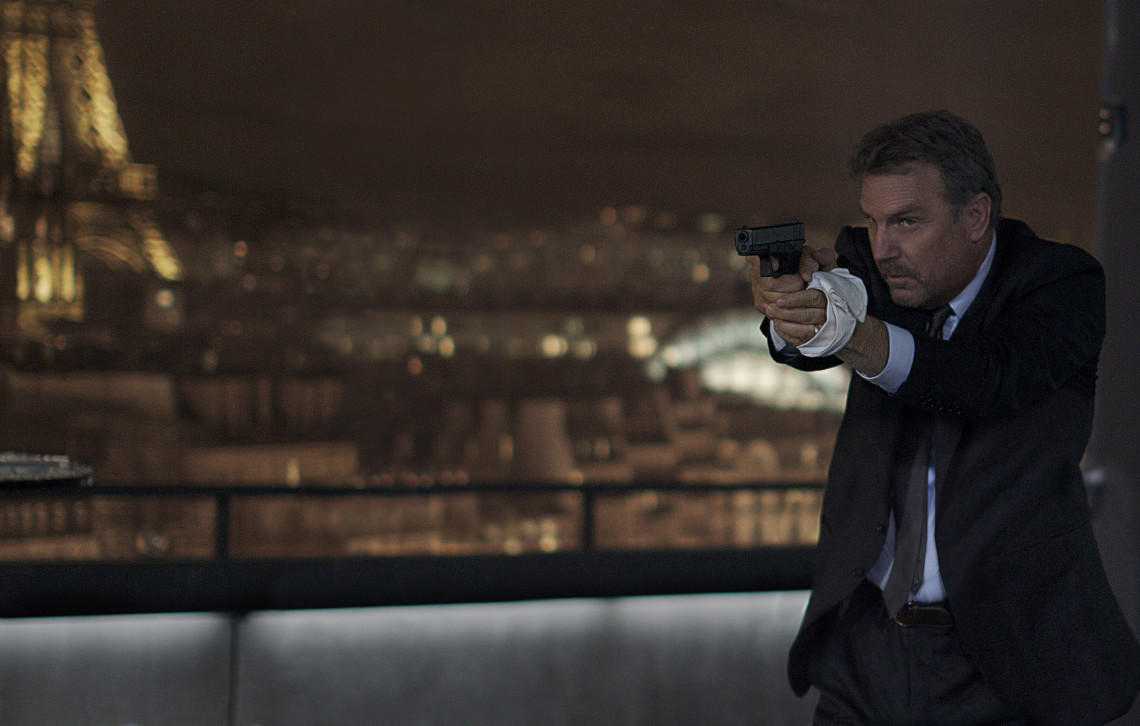 “3 Days To Kill”: Not Suitable for Sober Viewers

Amber Heard stands under a bordello red spotlight on an otherwise empty set, her leg propped up suggestively, as if she were posing for a lurid portrait. But there’s also a cell phone to her ear, no one’s watching her, and she’s alone. Kevin Costner’s character, Ethan Renner, a former government agent, is on the other line. He’s at home, hallucinating. That’s partially because he has “brain cancer,” but it’s mostly because the experimental drugs Heard is giving him to treat that cancer induce hallucinations as a side effect. Costner wants these drugs so he can spend more time with his teenage daughter before he dies. Heard is giving him these drugs, in turn, as payment for his work as a state-sanctioned hitman. At her behest, Costner is killing his way toward the film’s dirty-bomb-dropping big bad guys, “The Wolf” and “The Albino.” Now he’s freaking out, calling Heard, asking for a way to stop these psychedelic visions. She’s got one scientifically proven solution for his plight: drink some vodka. She may as well be speaking to the audience. The film’s so deeply steeped in boozy machismo that it should be granted a brand new MPAA rating: “not suitable for sober viewers.”

With McG directing from a script written by Luc Besson, 3 Days to Kill is an intentionally ludicrous movie – and will probably only be enjoyed by those who think aesthetic and narrative absurdity is a virtue in and of itself. You get all the saccharine families-should-stick-together thematic nonsense you’d expect from Besson, presented with the visually incoherent approach normally employed McG – the worst of both worlds. The way “3 Days” is written calls for a distinct authorial style, but McG directs it with empty flash instead. Consider the above-mentioned scene: the set-up and lighting and presentation and blatant sex-appeal reveal his intentions. McG wants the film to be self-aware and gloriously over-the-top, as if it the product of an action movie’s id. But he ends up reveling in over-the-top trope-based stupidity. Instead of illuminating or investigating what makes these films so silly, he just amplifies those qualities.

The plot, as in Besson’s recently-lensed The Family, is designed around mixing familial dynamics with pleasingly-presented violence. Costner’s Ethan is estranged from his teenage daughter (Hailee Steinfeld,) and when he’s diagnosed with the aforementioned affliction, he decides he needs to spend his last days making up for the time he lost while he was out killing. That becomes a challenge when high-up operative Heard – squeezed so tightly into her leather and latex getups that she looks like a sorority girl dressed as Scarlett Johansson on Halloween – pulls him back into ‘the trade.’

She offers him both a cure for his ailment and a $50,000-per-henchman-corpse stipend to track down the Albino and the Wolf, two men who’ve been dropping dirty bombs across Europe. The push-pull between Costner’s two separate priorities – his daughter, and his death-dealing – becomes the joke of the whole film. The gag is that Costner is constantly haranguing his tied-up victims and prisoners for fatherly advice, when he should be like Bruce Willis in a 80s action movie, indulging that boozy machismo, shooting them in the face.

McG isn’t talented enough to take seriously what Besson is willing to take seriously, though – he can’t keep his tongue in his cheek. So the running gag becomes no more than a silly affectation; a failed stab at turning this direct-to-video-worthy potboiler into a slyly comedic romp. The script calls for a director like Besson, who can imbue weirdness and vision and idiosyncracies into such a rote plot. All McG does, in contrast, is take the piss out of this script. He cuts to a new shot every two seconds, fetishizes every explosion, and overdoses the film on sub-Michael-Bay kinetic aesthetics.

There’s no commentary at work here – just overblown nonsense. Walking out of the theater, I turned to a colleague, and checked myself: “Is there any chance,” I asked, thinking of the amped up genre-movie conventions in play here, and thinking of Heard, dolled up as if she were a noir vixen conjured up by a genre movie’s fever dream, “that there’s some kind of Verhoeven-y subversive intentions working below this movie?” The question was met with a scoff. “No,” he quipped, “it just wants to trick you into thinking that.”

One thought on ““3 Days To Kill”: Not Suitable for Sober Viewers”