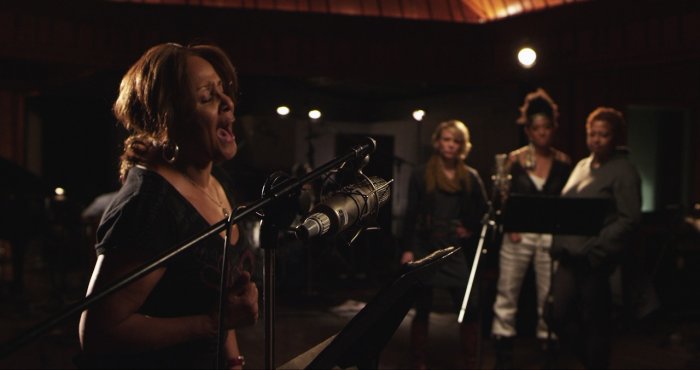 The entertainment business is full of dreamers. Anyone who loves singing, writing, filming, acting, painting, or any form of artistic expression enough to pursue it as a lifelong profession is almost certainly certifiably insane. You have to love the art enough to languish and struggle for decades just to make ends meet. This struggle is the behavior of lunatics–noble, inspirational lunatics.

Darlene Love was a singer for The Blossoms, who sang backup during the 1960s for countless famous artists–the first black back-up singers of their day. During the days of Phil Specter’s Wall of Sound, Specter had Love sing lead vocal on several songs that he ended up crediting The Crystals for singing, including the famous “He’s a Rebel.” Her entire young career was spent under Specter’s thumb, backing up other artists, unable to attempt a solo career until after her thirties.

Merry Clayton was a feisty gospel diva, whose most well known for her wailing background vocal on The Rolling Stones’ “Gimme Shelter.” Her solo career was given every opportunity to succeed, with terrific vocal quality and plenty of distribution–it just never took with audiences, relegating her back to background.

Lisa Fischer was a former background singer who came up behind Luther Vandross, and she was the rarity who seemed to have a successful solo career– her single “How Can I Ease The Pain” won a Grammy, and she appeared to be on her way. However, her window closed before she could expand upon her success, and, to the surprise of others, she very gladly went back to background.

The fourth story is Judith Hill, a younger backup singer in a contemporary age which seems to shun backups. Unlike most of the older women, Judith has an unquenchable desire for the solo career. She will gladly turn down all but the most elite backup jobs, because every hour spent not focusing on breaking out solo is an hour wasted in her mind. Her breakout opportunity seemed to be the Michael Jackson “This Is It” tour, where she would do duets with the King of Pop. His untimely death closed that window, and she refuses to spend any more time waiting.

Like most warm-blooded Americans, I love gospel music with all my heart. I also love stories told by old souls. Thus, I was weak in the knees right from the jump. Truthfully, a film of Lisa Fischer riffing into a mic for ninety minutes might get a better grade from me than this doc as is. The director, Morgan Neville, doesn’t do a great deal stylistically: it doesn’t look much different than anything you’d see on VH1 from a visual perspective.

The film’s success is determined by how compelling its characters’ stories are, simple and plain. Neville has centered on funny talented women who love the spotlight and aspire for solo careers, but they love music more than fame, so they’ve kept at it for their entire lives. Unlike most singers, they have the talent to earn the opportunity for stardom. However, like most talented singers, circumstance and luck simply don’t align the stars to permit these women to step into the spotlight for themselves.

This is the type of film that should be shown to any teenager aspiring to endeavor a career in the arts. Women this talented and this hard-working didn’t make it. If you don’t love your craft as much as they do, you’ll be miserable and you’ll fail. 20 Feet From Stardom is hardly Herzogian in scope, but the stories of these four women–their ups and downs, their fortune and misfortune–make for a compelling documentary, full of gospel music, rock factoids, and old souls. It’s a literal Behind The Music special, revealing through extraordinary women the incredible driving power of a dream.