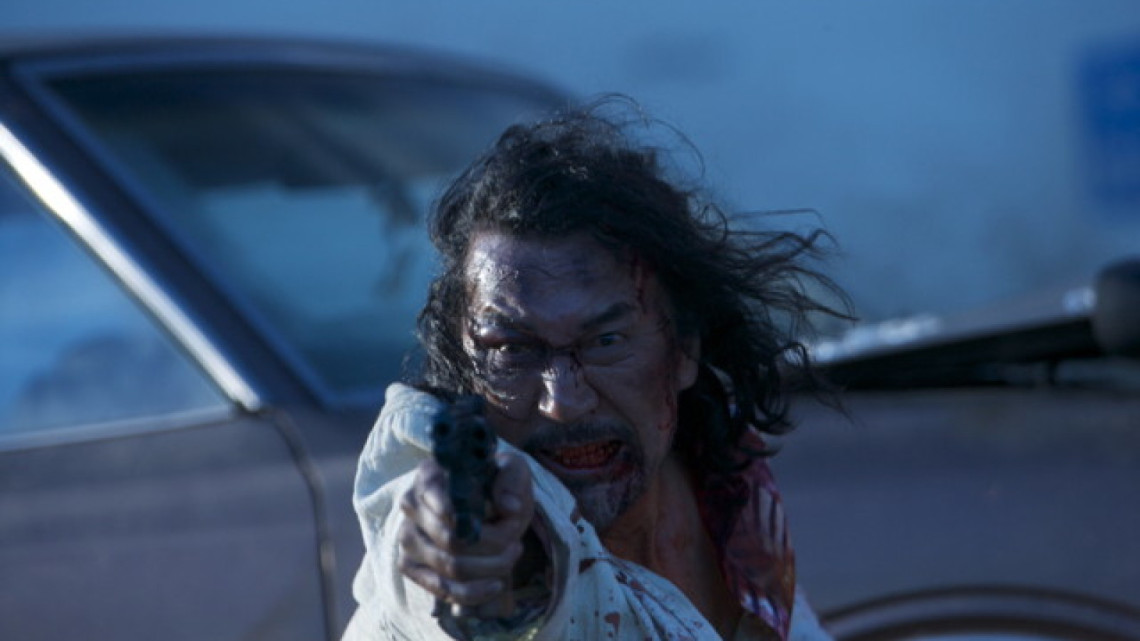 “The World of Kanako” Is A Well-Organized Mess

Just in time for the holidays, here’s a slice of existential parental terror: The World of Kanako, Japanese filmmaker Tetsuya Nakashima’s follow-up to his 2010 film, Confessions. That picture made the AMPAS shortlist for Best Foreign Language Film back in 2011. By contrast, it’s hard to imagine the pundits who comprise the Academy’s voting body watching The World of Kanako without losing their lunches. The hectic, sprawling story is bookended with two separate Christmas seasons that act as the bread to a blood-caked sandwich. Nakashima’s made a brutal movie that’s as exploitative as it is chaotic, but chiefly it’s a multifaceted tale wrapped around an emotionally tangible experience: the grown-up fear of not truly knowing your children.

The results are a well-organized mess. Summing up the plot without either leaving out or giving away too much detail is a Sisyphean chore. The World of Kanako veers in myriad directions, and appears to be slipshod until the final half hour or so, when we get a full glimpse of the director’s creative road map and everything finally starts making sense. In short, the story’s about former detective Akikazu Fujishima’s (Kôji Yakusho) desperate, protracted search for his missing daughter Kanako (Nana Komatsu). We know that Fujishima is separated from his wife, that he resigned from his detective post after catching his wife with her lover, and that he’s a few crayons short of a box. We also suspect that Kanako is involved with unsavory stuff from the outset, though how unsavory is the film’s great mystery.

So the family portrait here is less than perfect. Nakashima revels in that, though. The World of Kanako is an ugly, ignoble film about ugly, ignoble people, a lurid neo-noir where even the most redeemable character turns out to be guilty of violence themselves. That’s part of the fun, though–assuming you consider exposing your soul to wanton amorality “fun.” By cutting every trace of humanity away in the film, Nakashima invites us to embrace the vulgarity that runs rife through his picture even as we reject it.

Just as the film has little use for decency or rectitude, it has little patience for its viewers’ attention spans. Do not expect The World of Kanako to lead you around by the nose or hold out a hand for you to grab onto. Nakashima cuts back and forth between past and present, leaping from timeline to timeline and marking each shift with title cards that flick by so quickly that if you blink, you’ll miss them. The World of Kanako isn’t light viewing, but not just because of its content; its breakneck pace is unforgiving of audience distraction. Characters come and go with little fanfare or introduction, new truths about the spritely but demonic Kanako and her sadistic, candy-coated world are uncovered at every turn, and everybody–everybody–does so many drugs that it’s hard to trust our perception of the film’s reality.

The one person who keeps The World of Kanako glued together is Yakusho, courtesy of his dominant performance. Just as Nakashima has his own clear-cut influences (think Seijun Suzuki and Takeshi Kitano with a dash of Arthur Penn and John Ford), so too does Yakusho; he’s channeling the spirit of greats like Toshiro Mifune, but you get the sense that his work here is even more indebted to South Korean actor Choi Min-sik, who turned the antihero of Park Chan-wook’s Oldboy into a sympathetic figure from beneath his lion’s mane of unkempt hair and crazed grin. Yakusho is unhinged but he’s always human and heartbroken, furious over his daughter’s misdeeds, and resentful of television advertisements that taunt him with images of the family life he never got to have. Even as he does terrible things, it’s easy to feel sorry for the poor bastard.

The World of Kanako will leave you feeling like you need to take a shower with its grime and nihilism about the anxieties and heartaches of parenthood. But in spite of its vast, corrosive qualities, it can be surprisingly human and affecting at times. How connected are you to your own kids? Do you know where they go, what they do, what their dreams are, and who they truly are? Nakashima’s film drives at the darkest reply to these questions imaginable: Maybe you’re better off not knowing.