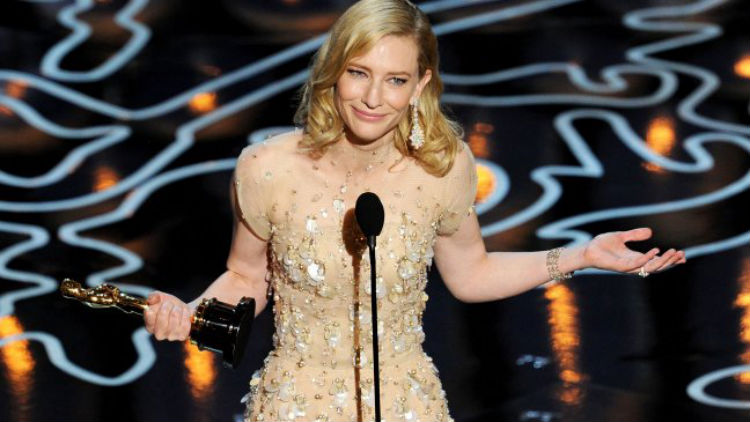 During her acceptance speech for Best Actress at Sunday night’s 86th Academy Awards, Cate Blanchett took the opportunity not to talk about recent controversies, but instead about the power that women have in the film industry. She lambasted “those of us in the industry who are perhaps still foolishly clinging to the idea that female films, with women at the centre, are niche experiences.”

“They are not,” she continued. “Audiences want to see them, and in fact, they earn money.” To underline the point, she compared the ignorant ideology to the Flat Earth theory: “The world is round, people!”

She’s right. If the last few years have proven anything in the industry, it’s that female-led films like The Hunger Games and its sequel, Frozen, Bridesmaids and The Heat were monsters at the box office, and that the ‘people don’t see movies about women’ excuse for a female-led film under-performing is resoundingly absurd and out of touch. And yet, it still gets said.

Blanchett also highlighted that 2013 was “a year of, yet again, extraordinary performances by women.” There were, in fact, many performances that deserved to be nominated but went ignored, from Brie Larson in Short Term 12 to Greta Gerwig in Frances Ha. Many women in the industry speak of how difficult it can be to find strong (as in meaty and complex) female roles, and we should celebrate the ones that do exist. Blanchett has been on a roll this awards season, pointing these issues out and sending out a powerful rallying cry.

The immortal gif that sums up her pursuit came from the red carpet of the Screen Actors Guild Awards in January, when she pointed at E!’s Glam Cam, which was slowly taking in her body and outfit, and asked, “Do you do that to the guys?” It spread on social media, and came to represent the fact that the media still focuses on women’s appearances rather than their talent or achievements. To be fair, the remark was made mostly as a joke, but the incident is yet another part of her feminist goals during the awards season.

The speech on Sunday definitely has some issues that deserve to be considered in terms of Woody Allen, but I would caution against that taking over the conversation. In the months before Dylan Farrow’s open letter about Allen’s alleged sexual abuse, Blanchett repeatedly praised Allen for his unparalleled ability to write strong female characters.

“I just wanted to thank, first and foremost, Woody Allen. Not only for this, but for everything he’s done,” she said at the Critics’ Choice Awards. “Not only for cinema, but for the roles he’s created for women.” Heralding Allen for his feminism has become more thorny since Farrow’s letter and the resulting media storm, particularly since Farrow directly called out Blanchett in the letter. On Sunday, as some wondered whether she would mention him at all, she did so subtly. “Thank you so much, Woody, for casting me. I truly appreciate it.”

Blanchett, I think, has handled this awards season with a noble agenda. When that agenda was challenged, she slightly deviated her focus but remained vigilant. Women are doing phenomenal work in film, and it needs to be acknowledged that female films do earn money. A powerful message, and one that an actress is admirably using her platform to proclaim.