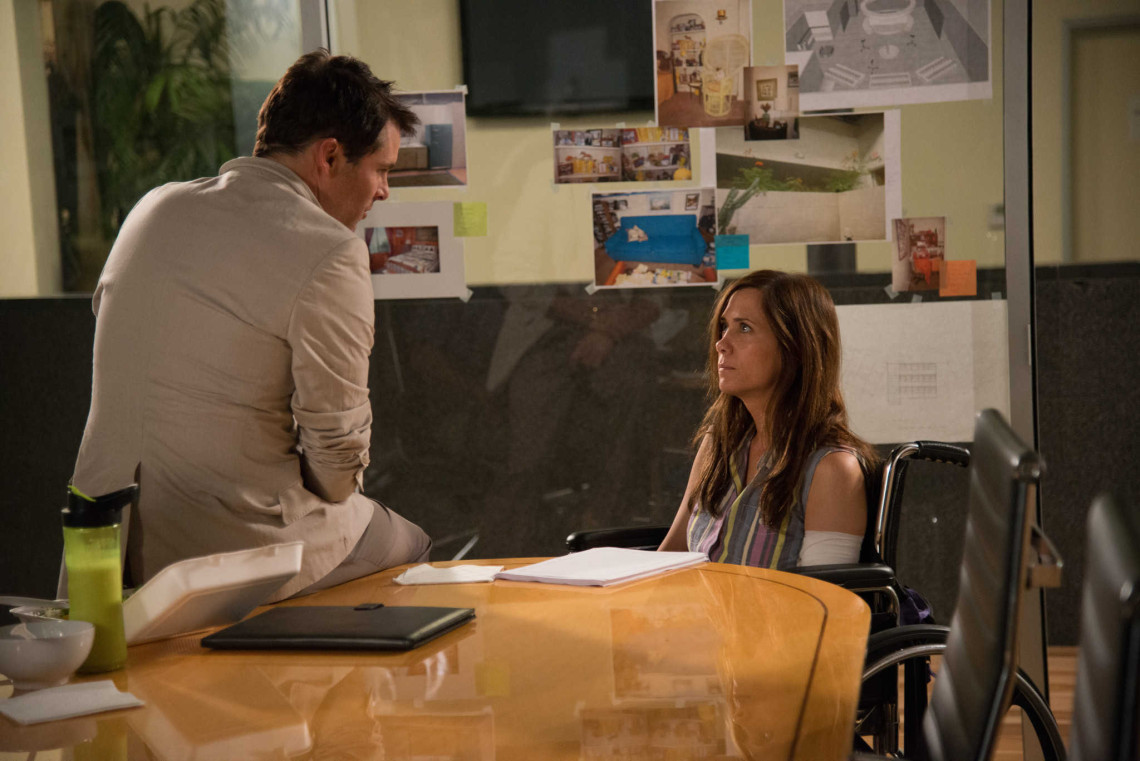 If a mad scientist merged all of Kristen Wiig’s oddest Saturday Night Live personas into one, and then that new being experienced a grand mal cerebral short-circuit, the result would be maybe half as off-kilter as Alice Klieg, the character Wiig plays in Welcome to Me. Alice is a woman with borderline personality disorder who has been living in a perpetual state of 1990-something for who knows how long, dwelling in a one-room apartment filled with swan-themed tchotchkes and endlessly rewatching taped episodes of Oprah on a CRT TV that hasn’t been turned off in 11 years. And then she wins more than $80 million in the lottery and decides she wants her own talk show.

Welcome to Me comes from Will Ferrell and Adam McKay’s Gary Sanchez Productions, whose films—including Tim and Eric’s Billion Dollar Movie and the recent Anchorman sequel—almost always have a manic, surreal bent to them. Here, the weirdness is completely in control, but in a way unlike any of the company’s other work. Alice is like an Adult Swim protagonist who’s wandered off the reservation of late-night television into the real world, where rational people must confront her strangeness. Welcome to Me the daytime talk show consists mainly of Alice having actors reenact minor parts of her past that she’s mentally blown up to momentous, formative events. Interspersed are demonstrations of baking meat-loaf cake with sweet-potato icing, and neutering a dog (said operations are performed separately, to be clear).

This is a remarkably strange, unceasingly riveting piece of work. Eliot Laurence’s script and Shira Piven’s direction emphasize agonizing stretches of awkwardness. It’s frequently unclear whether the audience should laugh or look away, though each such beat is likely meant to elicit both responses. It’s almost purposefully alienating, taking the trope of the self-absorbed dark-comedy protagonist over the cliff. Wiig is captivating, a black hole of heedlessness casually wreaking havoc on everyone around her, completely oblivious to the hurt she inflicts on her friends and family; she floats high above any lines between likable and intolerable. As for the film’s portrayal of borderline personality disorder, it gradually becomes evident that the story’s not aiming so much for accuracy as it is using some characteristics of the condition as a way to set up its thematic pursuits.

Welcome to Me doesn’t mock or deride Alice for her personality or increasingly erratic actions. The raw pain she channels into her show is simultaneously a way for her to sort through her issues and a way for the movie to scrutinize how artists put themselves into their work and how that ties into the rabid American hunger for fame. It also touches on what women go through in trying to bring their visions to life in a male-dominated entertainment industry. Let’s face it: Men get away with way weirder stuff than anything Alice does; hell, they’re celebrated for it (see: the aforementioned Tim and Eric). And this film is worthy of its own celebration, at least among those who can get onto its extremely idiosyncratic wavelength.