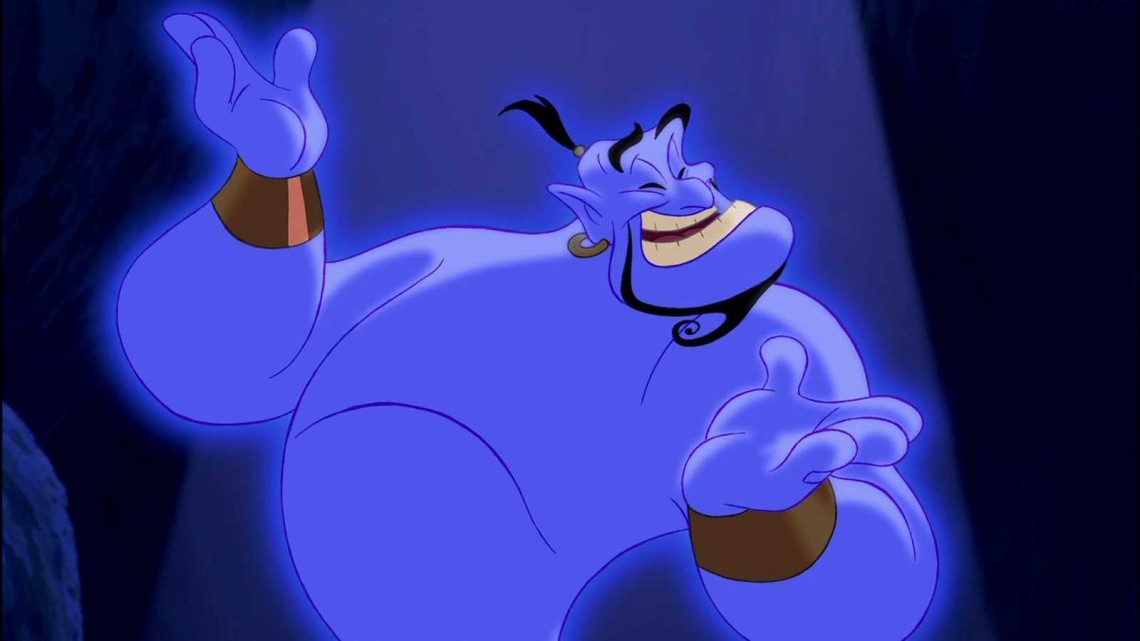 At the movies, 1992 was the year of Clint Eastwood’s Unforgiven, of Tim Burton’s Batman Returns, of Michael Mann’s The Last of the Mohicans. But the biggest movie of the year was Aladdin, outgrossing even the widely anticipated sequel to Home Alone. It’s not uncommon for an animated film to top the domestic box office–Toy Story and Toy Story 3, as well as (ugh) Shrek 2 have done so in the intervening years–but it’s not normal. (Neither Frozen nor Finding Nemo topped the box office in their respective release years.) Aladdin came at the right time for Disney, capitalizing on the worldwide popularity of Robin Williams and widespread enjoyment of hand-drawn animation months after Beauty and the Beast became the first such film to get a Best Picture nomination at the Oscars.

Nearly 25 years have passed, and Aladdin is finally–finally–available on Blu-ray in the United States. Though there are a few other canon releases that have not yet been released on Blu-ray, such as The Black Cauldron, Aladdin is the last major film to make the leap to HD. Watching the movie now, it’s still baffling to consider that Disney waited so long to pull the trigger on the release: there was once controversy surrounding this film’s racial politics and offensive lyrics, but films like Pocahontas and The Princess and the Frog have inspired similar debates and were released on Blu-ray without scandal. Of course, Aladdin isn’t taking a careful and considered approach to racial depictions–its title character, a diamond-in-the-rough street rat, sounds like a 90210 reject and looks it, too, while only the bad guys are designed to have Middle Eastern accents and facial features.

Its problems are undeniable, but Aladdin is still an extremely funny, witty adventure. The story may be predictable, but the ways that co-writers/producers/directors John Musker and Ron Clements play within the formula of the iconic hero’s journey are delightful still. Even before Aladdin finds a musty old lamp inside the foreboding Cave of Wonders and unleashes the Genie within, Aladdin survives on its mix of old-fashioned musicality, zippy pacing, and snappy dialogue. (Only on an umpteenth rewatch do many of this movie’s plot strands fall apart. Remember how no one comments that Princess Jasmine tries to run away, including Princess Jasmine herself, mere minutes after she returns to the palace of Agrabah to save the imprisoned Aladdin?) Jafar and Iago, as voiced by the unctuous Jonathan Freeman and shrill Gilbert Gottfried, are as lively and delightful as our heroes Aladdin and Jasmine are fairly dull and cipher-like. Jafar doesn’t become more likable because he’s conspiring against a bland set of good guys, though it is easy to wish that Musker and Clements (as well as co-writers Ted Elliott and Terry Rossio) had spread the wealth, re: character personalities.

Oh, but who cares about Jafar and Iago and Aladdin and Jasmine? Right? When we think of Aladdin, we think only (or primarily) of the Genie. Here, we have an animated version of Tim Burton’s first Batman, a film where the impish clown is billed above the stolid hero, in part because the imp is more lovable. In truth, watching Aladdin again inspires a closer comparison between Robin Williams’ incredible work as the Genie with that of Anthony Hopkins as Hannibal Lecter in The Silence of the Lambs. The latter performer is only in 16 minutes of the 1991 thriller, yet he won the Best Actor Oscar, and his performance is such that it hovers over the entire proceedings. Hannibal’s not in much of the movie, but it feels like he is. Robin Williams is in a bit more of Aladdin, but not that much more. The Genie doesn’t even show up for the first 35 minutes of this 90-minute adventure, an absence felt keenly with each passing minute. For kids and adults like, waiting for the Genie to arrive is like Milhouse van Houten whining about wanting to go to the fireworks factory already.

More than two decades have passed, and amazingly, Williams’ work remains equally vital. Certainly, the kids of 2015 may need the references explained, but the joie de vivre with which the Genie carries himself is still quite infectious. Aladdin may not be as strong of an overall piece of animation as The Little Mermaid or Beauty and the Beast, but Eric Goldberg’s work in creating the Genie, as well as in helping drive the zany “Friend Like Me” and “Prince Ali” sequences, are proof enough: even with competition nipping at its heels in the early 1990s, Disney’s hand-drawn animation was still in its apex.

Unlike those other early-‘90s Disney films, Aladdin is male-centric and, interestingly, more of an action story than anything else, replete with setpieces driven by chases as much as by songs. Its sole female character suggests a less passive approach to royalty–Jasmine wants to marry for love, which shouldn’t have sounded remotely revolutionary in 1992. However, she’s turned into a damsel in distress for the third-act battle, literally stuck in a prison cell. The songs are slightly imbalanced as well, in part because of the tragic passing of lyricist Howard Ashman a year earlier; he wrote three of the songs with Alan Menken, but the other three (including “A Whole New World”) were co-written by Menken and Tim Rice. Now that it’s on Blu-ray, it’s fun to revisit Aladdin, but the emotional heft of the Genie’s journey to freedom is the only equivalent to the arcs of Ariel, Belle, and the Beast. It’s not wrong to think that Robin Williams is the true star of this movie; it’s just a shame that the actual leads of the film aren’t nearly as exciting as the Genie or the bad guys.

For an embarrassingly long time, it was impossible to watch Aladdin in high definition in the United States. (There’s been an official UK Blu-ray around for a while, but unless you had a region-free player, you had to wait.) So the look and sound of this film is arguably as anticipated as any tributes to Robin Williams in the special features, and thankfully, Disney has not disappointed in this aspect. (More about the latter in a bit.) Aladdin looks marvelous on Blu-ray: the vibrant colors of Agrabah, from the bright hues of the marketplace to the dark blues of the desert night sky, are brought back to life in high definition. This is a valuable entry to Disney’s Blu-ray releases, and a truly gorgeous thing to behold.

It’s been more than a year since Robin Williams passed away. It’s not wrong to suggest that the Genie is almost interchangeable with the way we perceived and processed Williams’ death (along with a handful of other characters). Ignoring his death–especially since Aladdin’s Blu-ray release was pushed back from 2013 to this fall–would be disingenuous, but acknowledging the utter tragedy of his passing might, in effect, be too grim for a Disney Blu-ray. While these extras don’t ignore Williams’ death, there is a gnawing sense that more could’ve been done to acknowledge his impact.

Part of the core problem is simple: Disney’s most expansive special features for this film (and others) are on DVDs. Many of this film’s DVD extras, including audio commentaries, documentaries, and deleted scenes and songs, are on the Blu-ray, in standard definition. Sadly, there are only five extras new to this Blu-ray, and the longest is an extended ad for a Broadway musical. The Genie is the center of two of the supplements, “The Genie Outtakes” and “Genie 101.” The former is, without question, the best one: it’s a 9-minute extra in which Musker and Clements, as well as Goldberg, reminisce about working with Williams, interspersed with never-before-seen, storyboarded outtakes of Williams as the Genie. What you see are different takes or references on lines from the film–Genie as John Wayne when he rescues Aladdin from drowning, or Genie play-by-playing the climactic battle between Aladdin and Jafar as a boxing announcer and an ex-punch-drunk-boxer-turned-commentator–and they’re unsurprisingly very funny. (A few of the gags, also unsurprisingly, are more adult than you’d expect from Disney.)

But that’s one extra, and the only time that Williams’ death is mentioned, aside from a title card dedicating the “Genie 101” extra to his memory. Arguably, a feature about Williams’ connection to Disney–as the Genie, as well as the star of Disney-adjacent films like Dead Poets Society and Good Morning, Vietnam–would be a stretch to connect to this release. However, the “Ron and Jon: You Ain’t Never Had A Friend Like Me” conversation between the film’s directors only mentions Aladdin in passing, talking more about their decades-long collaboration than their specific work on this film. (They don’t mention any of their directorial efforts outside of this and The Little Mermaid, despite having directed four other features, and another on the way.)

Maybe it’s disappointing that there’s a sparse amount of detail on Robin Williams in the new features because what we do get seems…even sparser. The “Genie 101” feature is much like “Unboxing Aladdin,” in that both are very short videos where someone points out a handful of wannabe Easter eggs. The former, hosted by Aladdin himself, Scott Weinger, is basically four minutes of “Here is who the Genie is impersonating;” the latter is designed like an unboxing video, where our host (a star of a Disney Channel show, or one of the co-stars, or something) points out general Easter eggs about the film. If you’ve ever perused the IMDb trivia page for Aladdin, few insights await you here.

Finally, there’s “Aladdin: Creating Broadway Magic,” hosted by actor/singer Darren Criss. Did you know that Aladdin is also a Broadway show? A Broadway show that you can buy tickets for? Like, right now? Well, aren’t you in luck. Yes, this is a 20-minute behind-the-scenes peek at the show, with interviews from the show’s director, choreographer, producer (Thomas Schumacher, who conducts those interviews), and the actors who play Aladdin, Jasmine, the Genie, and Jafar. (In the show, as in the film, Jafar is portrayed by Jonathan Freeman. How about a feature on his multiple decades of playing this character? I’d watch that.) Legitimately, the most fascinating part about this featurette is the brief part of the cast interviews where Schumacher suggests that the actors playing Aladdin (a man with Filipino and European background), the Genie (a black man), and Jasmine (a woman who has previously defined herself as “mixed ethnicity” without specifying what that means) are the “face of America.” Here, those involved pat themselves on the back for Aladdin being a less lily-white Disney story, even though the film was criticized for indulging in stereotypes, and the Broadway show is purported to have no Middle Eastern performers. This isn’t to suggest that a multicultural show is a bad thing, but Aladdin isn’t exactly Exhibit A in Casting Culturally Accurate Performers, either as a show or a film. The feature itself, in all other aspects, is well-produced but unremarkable. Again, it’s an ad. An ad may be well-made, but it’s still an ad.

Aladdin is the last major Disney animated feature to be released on Blu-ray. While the special features on the Blu-ray are a mixed bag, getting to see this 1992 film in HD is reason enough to buy the disc.