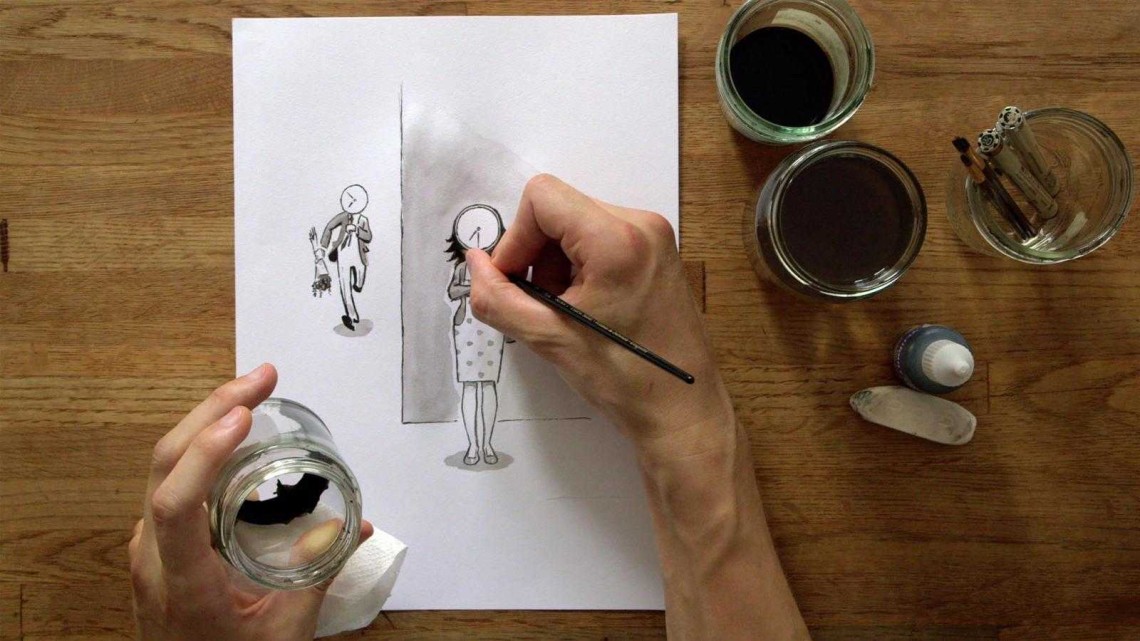 “Very Semi-Serious” Is Only Semi-Okay

Documentarian Leah Wolchok’s Very Semi-Serious is a semi-okay movie. It isn’t good. But it isn’t bad. It also, amazingly, isn’t just simply “there.” The film has perspective and an idea of what it wants to say. It’s also quite entertaining for the first hour. But in painting her “partially thorough portrait of The New Yorker cartoonists,” Wolchok discharges very scattershot filmmaking. Very Semi-Serious might be amusing and occasionally insightful, but it’s mostly all over the place and for no formal reason. Wolchok leapfrogs from point to point at random instead of sticking to a single developed theme.

That haphazardness nearly belies the fact that there is such a through line: cartoonist Bob Mankoff, who serves as The New Yorker’s current cartoon editor. Bob is a gaunt-framed man with a tangled lion’s mane of grey hairs and an infectious, wheezy laugh. Very Semi-Serious chiefly follows Bob through its 83-minute duration, taking us through the offices of Condé Nast (The New Yorker’s publishing company), his home, and wooded walking paths where he demonstrates his inability to properly use a Chuckit. He’s an odd duck, but he’s a charming eccentric we enjoy spending time with. He’s a fount of knowledge, too, in terms of The New Yorker’s cartooning history as well as the process from both creative and editorial perspectives.

Most importantly, as far as the film’s structure is concerned, he’s a gateway to the artists responsible for sketching The New Yorker’s cartoons. We meet a lot of people in Very Semi-Serious—some of them veterans of the field, some of them up-and-comers honing their craft. To name more than a few, George Booth, Mort Gerberg, Farley Katz, Zach Kanin, Roz Chast, Carolita Johnson, Ed Steed, and Victoria Roberts all appear. Viewers might want to bring a notepad with them to Wolchok’s film for sheer volume of name-dropping. She introduces us to so many different cartoonists that keeping half of them straight through rote memory feels like a fool’s errand—although perhaps the individuals aren’t the point as much as the collective narrative they weave about their medium’s vitality.

“Pencil marks,” Mankoff tells us when the film begins, “have all the spontaneity that life has. They can make the strange familiar and the familiar strange.” Very Semi-Serious is at its best when it explores this philosophy by dissecting The New Yorker’s cartoons—particularly the analysis of what goes into them, where their inspirations stem from, and the origins of how, ultimately, the precious few that make it into each edition. Watching Mankoff do his work—sifting through cartoons with his peers and accepting handfuls of cartoon pitches from hordes of artists hoping to see their work appear in The New Yorker’s pages—is exhausting. It’s also essential. If you’ve ever cracked a copy of The New Yorker, the visual elements you remember first are most likely the drawings. Some people know and read The New Yorker for its short fiction, or its poems, or its journalism, or its criticism, but everybody associates the magazine with its iconic cartoons. That Wolchok should be so eager to acquaint us with the sources of those cartoons is only natural.

What ends up dogging the film, though, is its weak focus. There are, perhaps, far too many talking heads here and without variation in content; there are countless people who explain their approach to cartooning and talk about their relationship with The New Yorker. Frankly, only a few of them actually have anything to say about either, and so we end up learning only a little about cartooning by consequence. And yet Very Semi-Serious manages to impart meaning by presenting us with cartoon montages between its interview-based content; they’re humorous interludes that tie the film together, and one of the best arguments for their value to The New Yorker as a brand and cultural monolith. They make us laugh by virtue of having something to say about us, about our society, and about our lives. That laughter is the magazine’s glue.

To drive the point home, Wolchok shows David Remnick, The New Yorker’s editor-in-chief, sitting down with Bob to sift through potential candidates for publication, picking up one cartoon at a time and bursting into fits of chuckles and guffaws as they do. The two men barely communicate through words. Instead, they communicate through mirth. Very Semi-Serious doesn’t make a very strong statement about its subject matter, but moments like this, where the joyful power a single image composed of dots and chicken scratch is shown in perfect clarity, make all the statement that the film needs.

One thought on ““Very Semi-Serious” Is Only Semi-Okay”