Two by Sion Sono: “Himizu” and “Guilty of Romance”

These two movies, both directed by Japanese provocateur Sion Sono, were originally released back in 2011. Now, they’re finally getting simultaneous theatrical runs here in the states. Much of what could be said about Himizu could also be said about Guilty of Romance. Sono’s work is marked by a severe sense of bleakness, an affection for classical music underscoring horrific events, and dissonantly bright colors. He’s also in love with unsettling violence and sex, and purposefully seeks to throw the viewer off-balance. These are both films I consider “ungradeable,” outside the bounds of letters or stars or points. I loved them both, but they are most certainly not for everyone. 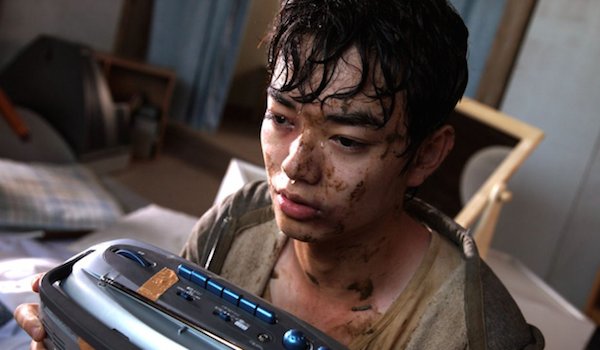 Based on the comic book by Minoru Furuya, Sono was ready to start shooting this film in 2011 when the Tōhoku earthquake and tsunami struck. He decided to roll with this and explicitly put the story in the post-disaster setting. Sumida (Shoto Somentari) is a high schooler who finds himself put in charge of the family boat rental shop when both of his parents abandon him. His gaggle of adult friends, most of whom have been left homeless by the earthquake, do their best to raise Sumida’s spirits. But loan sharks and the generally dismal conditions of society wear on his psyche, and he soon finds himself staring down an abyss.

Through Sumida’s jaded eyes, the optimism-no-matter-what spirit of Japanese culture receives a withering examination. Starting from very early on, the film pummels its characters with unpleasantness both physical and emotional. Sumida’s father brays to his face on how much better off he would be had Sumida never been born. He’s on the end of multiple merciless assaults from gangsters looking for their money. Every single glimpse of something nicer seems waiting to be undone by a new dark twist.

Himizu is operatic in its despair, embodied in relentless emotion from all of the actors. Somentari is a raw, bleeding wound of a human being, and riveting for every step of his agonizing journey. Acting as his foil is the relentlessly upbeat Keiko (Fumi Nikaido), who keeps her chin up no matter how bad things get and has set her romantic sights on Sumida. Sono is enamored of strange enamors, as anyone who’s watched Love Exposure can attest, and Sumida and Keiko’s ideological tug-of-war gives no quarter to anyone involved, including the audience.

Despite the almost nonstop drumbeat of human cruelty, there’s a surprising core of sweetness to Himizu, as well as a strain of comedy running throughout. This is a movie that uses hopelessness as a way to explore hope. At the end of the tunnel is a dim light, as unbelievable as it may seem. These characters are tormented by society’s coldness – in one scene, a violent stabbing erupts over a young man’s refusal to surrender his bus seat to a pregnant woman. When we’ve already heard so often the message of how human connection can save us, the best way to make it stick is the hardest sell. 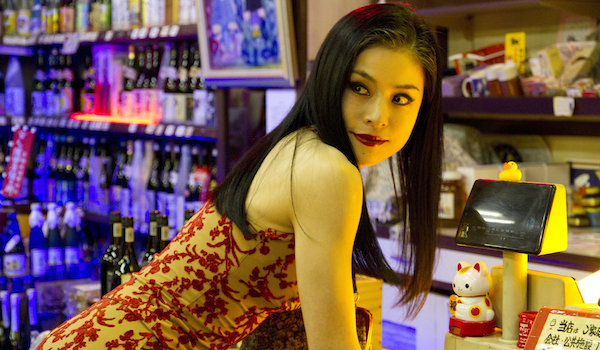 This is the harder film to watch, because there is no redemption to be found in the end. It opens with a grisly, nightmare-inducing murder scene and then brings the audience up to its unlikely cause. Izumi (Megumi Kagurazaka) is the wife of a successful writer who has everything she could want – except for love. She is a prop for her husband, and her discontent leads her to seek a job, even though she doesn’t need one. Modeling work leads to nude modeling, which leads to pornography, which leads to even more extreme places. Eventually, she comes under the wing of Mitsuko (Makoto Togashi) a professor by day and prostitute by night.

Guilty of Romance is a subversion of the narrative of female empowerment through sex. Izumi seeks the excitement she craves from her normal routine, but finds only emptiness no matter where she goes and what she tries. Mitsuko suffers from severe father issues and subscribes to the idea that making men pay her for sex gives her power over them. But as with all Sono characters, fate is dead set against these women capturing their own agency. The movie isn’t anti-feminist or misogynistic (or at least I don’t see it that way, but I’m a dude, so take my opinion on such matters with the customary grain of salt). It is massively upsetting, but it’s firmly in its protagonists’ corner. Izumi and Mitsuko’s suffering is not a punishment for their sexual forwardness, but a matter of fact of living in a Sono world.

Like Somentari in Himizu, Kagurazaka throws all of herself into her performance. It’s the key to selling the outsized emotions and making the over-the-top brutality work to its intended effect. Himizu is a film of hope. Guilty of Romance is a film of despondence. In the former, a hand reaching out for help is grasped by another. In the latter, that hand only continues to flail, finding no purchase. The contrast is indelible.