The takeaway from Trust Me, the new film from multi-hyphenate Clark Gregg, is almost as old as time itself: Hollywood is the worst! Gregg all but marks off each expected cliche from a checklist. Venal agents? Check. Self-serving, heartless producers? Check. Actors more interested in advancing their careers than on adhering to basic human morals and ethics? Check, check, check. But unlike a vaunted classic such as Sunset Boulevard, this film has an intensely earnest undercurrent represented by Gregg’s lead character, an ex-child star-cum-agent. In spite of the impressive ensemble surrounding the writer/producer/director/star, the final third of Trust Me winds up being so misguided, compared to the overly familiar first hour, that the entire affair just feels noxious.

Gregg plays Howard, who would very much like to considered a fast-paced professional to the world around him, even though he’s undercut at almost every turn. His Bluetooth is constantly on the fritz, his car is a laughing stock (it even has one of those 80s-era automatic seat belts), and he’s always losing clients to rival star agent Aldo (Sam Rockwell, given just a few short minutes to remind us all why he’s the best). Howard’s personal fortune may be turning thanks to his comely neighbor (Amanda Peet), and his professional prospects may be singlehandedly saved by Lydia (Saxon Sharbino), a teenage newcomer who’s gifted with a shocking and inescapable talent and could be cast as the lead in a big new vampire franchise helmed by Ang Lee. As such, Howard does just about whatever he can to solidify the deal, even placate Lydia’s drunken lout of a dad (Paul Sparks).

For about an hour, Trust Me doesn’t rise far above agreeable, mixing sincerity with an expected dose of acrid humor and inside-baseball references. (In an early scene, one of Howard’s clients sweats losing a role to a “Lohan kid.”) Howard’s way of frantically running around from his apartment to a studio office to Lydia’s motel room is weirdly akin to watching Steve Martin lie his way through a movie production in Bowfinger, though to a lesser extent. But the framing device–an in medias res opening with Gregg offering some mystical-sounding narration as the camera zooms away from his bloodied body, an unavoidable Sunset Boulevard connection–nags throughout and becomes clearer in the final 30 minutes. Gregg’s script grows far heavier in the third act, creating an imbalance in tone that he’s unable to reconcile. Down one path, the introduction of a darker story behind Ray and Lydia’s relationship as father and daughter comes out of nowhere and simply seems too dark for a previously light and almost frothy Hollywood tale. Down the other, turning Howard into a straight-out hero and unfairly put-upon do-gooder runs counter to the legitimate humiliation handed him in the first hour. 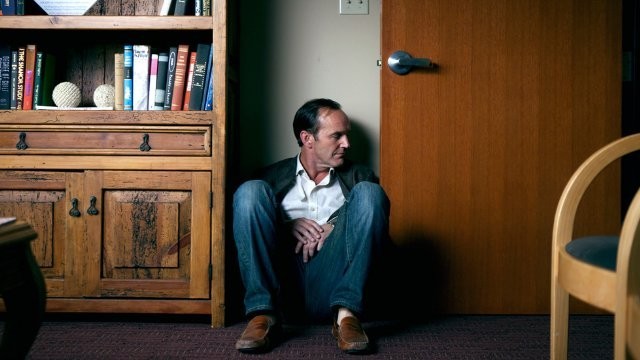 Now best known as Agent Coulson in the infinitely large Marvel Cinematic Universe, Gregg does fine work as Howard, whose failures as a child actor clearly fuel him to make his own clients as big in the industry as possible. Arguably, his best scene is a quiet one, where he recounts his greatest moment as an actor to Peet’s neighbor, sharing his first kiss on the set of a surfing movie in the 1980s. Here, particularly, Gregg goes straight for the heart without muddying the waters in undeveloped character motivations. Sharbino has the most difficult task, conversely; we have to believe that she’s as good of an actress as everyone in the film does, and that her manipulative (but initially friendly) nature is equally plausible. Though the scene in which Howard comes to appreciate Lydia’s acting prowess seems to think the vampire film-within-the-film isn’t painfully, unforgivably cheesy (he relates to the script on a personal level), Sharbino’s work there is legitimately as good as it should be. These two are the heart of the film, with many of the other players relegated to cameo appearances. (William H. Macy, for example, is in literally one scene that maybe runs two minutes long.)

Trust Me is a predictably ironic title; Hollywood agents are considered the exact opposite of trustworthy, and for most of this picture, the characters live up to the stereotype. Once Clark Gregg tries to twist the film into a more insidious depiction of how selfish a person can be, it falters and never recovers. With the exception of classics like The Muppet Movie, few films about the filmmaking industry and its various denizens would ever argue that Hollywood still is the Dream Factory. Trust Me, like so many entries in this subgenre, is convinced that the people who make movies are, by and large, pretty awful people. That may be true, but it’s not exactly a new piece of shocking insight.