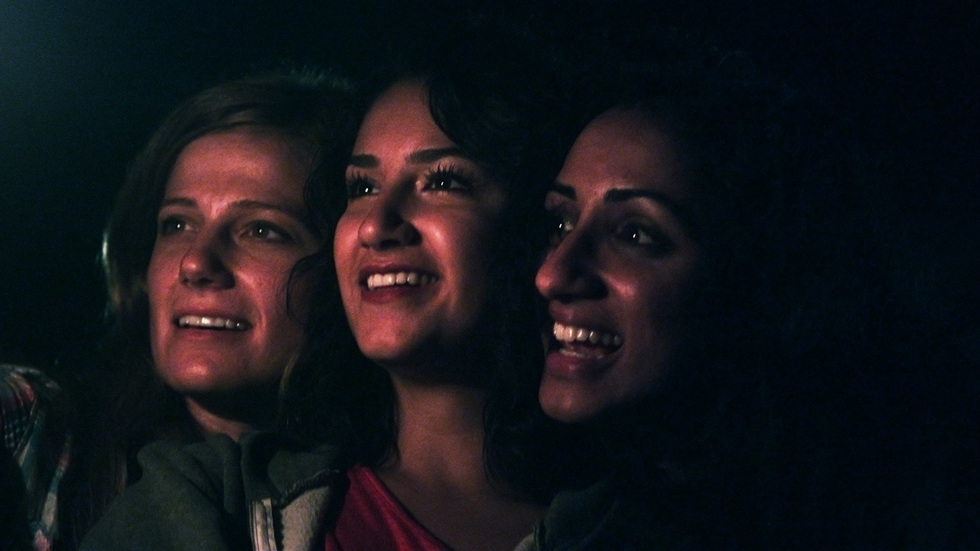 There are a number of intriguing ideas in Meera Menon’s first feature, Farah Goes Bang, although most of them struggle against this being very much A First Feature; there is an uneasy balance between the movie’s heart being in the right place and pervasive technical awkwardness. The main story is about a trio of female friends, just out of college and working for John Kerry’s ill-fated 2004 presidential campaign, traveling from California to the key swing state of Ohio to get out the vote. One of them, Farah, is still a virgin and more wants to want to have sex than she does particularly want to have sex. The other two, KJ and Roopa, tease her at length—what, after all, are friends for—but avoid overt pushiness like trying to foist boys on her.

The picture’s greatest strength is in that central character dynamic. When Farah, KJ, and Roopa are, in whatever configuration, alone doing friend stuff, there’s a disarming warmth and intimacy. (Also, no big deal is made of this, but it’s nice to see a group of friends in a movie where only one is white, rather than, as nearly always, the other way around) Menon takes great pains to create a verisimilitude of a kind not often seen in mainstream film, in dwelling to the length she does on issues like, for one example, the amount of time women (particularly Middle Eastern and South Asian women, as Farah and Roopa respectively are) spend on hair removal. Most films elide all that sort of uncomfortable details, but Farah Goes Bang presents women who drink, curse, fart, get into fights, freak out, all manner of things actual human beings do, and the film is all the stronger for it.

In other areas, it falters. A movie barely over 90 minutes, it feels immensely longer than it does primarily because so much time is spent on details like those outlined above that bigger-picture things end up getting lost. The political context is, interestingly, not one of these things, as from the beginning it’s clear that it’s not so much that they really believe in Kerry so much as it is that they hate Bush (this, ultimately, was Kerry’s real-life downfall, even more than the character assassination he underwent at the hands of Bush’s campaign), and the ongoing theme of everyone trying to talk themselves into the idea that working on the campaign gives them meaning is reasonably successful, as it’s something that the movie keeps artificially and kind of clumsily reintroducing before ultimately discarding in favor of the central trio of friends.

But the artificiality and clumsiness pervades elsewhere, ultimately sinking Farah Goes Bang as a successful film. Most fatally, the chemistry between the friends is, for almost the entirety of the running time, due to the rough but engaging work of actresses Nikohl Boosheri (Farah), Kandis Erickson (KJ), and Kiran Deol (Roopa); the script gives them no apparent motive until almost two-thirds of the way into the picture, at which point rote, by-the-numbers one-sentence back stories are revealed for Farah and KJ (never any for poor Roopa), at far too late a point in the story for them to have a great deal of resonance. This kind of delayed revelation mistakes absence for ambiguity, and assumes that all withholding of information is inherently compelling. If there was any reason for KJ’s hair-trigger temper to be a mystery, or for the reason why Farah is even on this road trip to have to wait until an hour in, it would be one thing. Instead, it ends up being an enormous drawback, dramatically speaking.

With nothing clear driving the characters, their actions end up seeming arbitrary, and the arbitrariness ends up making the subjective running time swell. Even the road movie conceit ends up being pointless, as they end up in Ohio before anything that could lend a sense of purpose for including the journey in the story can be established. The idea of making it be a road movie seems to come more from the “it’s my first film, let me put all this stuff I’ve wanted to put in a film in this film” temptation of the early-career filmmaker than it does organically out of the characters’, and consequently the story’s, wants and needs.

All of this aside, Farah Goes Bang is not a film that can be entirely dismissed, even if its negatives outweigh its positives . Meera Menon does seem to have a genuine eye for realistic detail, and for getting good performances out of actors, neither of which ability grows on trees. It will be interesting to see her mature as a filmmaker, if she can build on these strengths with material that they fit, and make a successful movie. Farah Goes Bang, though, is not quite that.