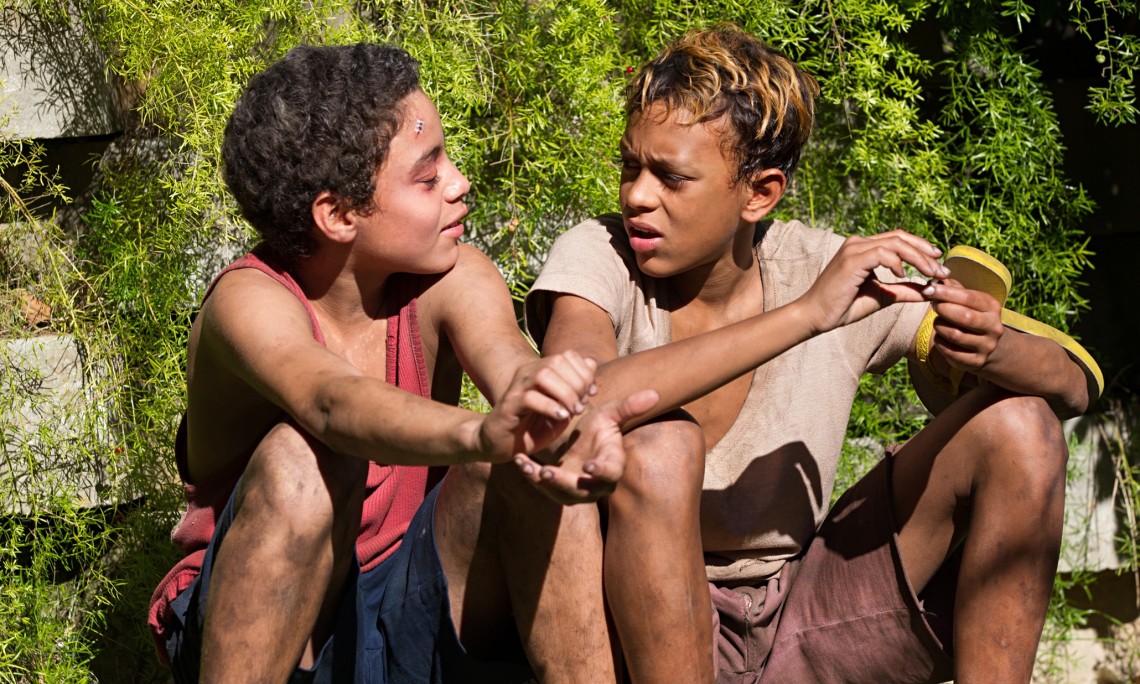 First, a brief moment to note the pun-tastic woes of Rooney Mara, co-starring in two critically disliked films opening on the same day, helpfully titled Pan and Trash. These folks make it awfully easy for us sometimes.  As a pal pointed out, this is actually the fourth time Stephen Daldry has directed trash – yet the director has somehow racked up a formidable streak of Academy Award nominations for gaudy, stupidly offensive pictures like The Hours, The Reader, and Extremely Loud and Incredibly Close.

Trash is a step up from Extremely Loud’s cloying 9/11 exploitation simply by virtue of not being one of the most appalling movies ever made.  It’s still pretty lousy, though. An adaptation of Andy Mulligan’s YA novel, it’s about three poor kids who, one day while trash-picking, find a wallet that contains enough clues and codes to bring down a monstrous local crime boss who just so happens to be running for mayor. The rest of the movie is a testament to their precocious ingenuity as the sly young tweens outwit a crooked police force and make some rather breathtaking leaps in deductive reasoning while solving the central mystery. Winningly played by Rickson Tevez, Eduardo Luis, and Gabriel Weinstein, the kids are all right. It’s the adults who are the problem.

I’m told Mulligan’s novel took place in an unnamed city, but Daldry and screenwriter Richard Curtis have set the film in Rio, anchoring it with a real-world specificity that does not serve this particular story well. Blatantly ripping pages from the Slumdog Millionaire playbook, Trash has a lot of razzle-dazzle poverty-chic with an exoticism that feels tastelessly touristy. Curtis, a master of rom-coms, is all thumbs when trying to untangle Mulligan’s convoluted plot. It feels like a video game as the kids run from one chase scene to another fetching objects — get the key, find the locker, get the Bible, break the code —  advancing every time to the next level with little sense of a story moving forward, and leaving a gimmicky aftertaste given all the real-life squalor onscreen.

Daldry has no idea how to reconcile the story’s mischievous, boys’ adventure spirit with his needlessly prolonged sequences of police brutality and child abuse. There’s a seriously scary corrupt cop (Selton Mello) chasing after these kids, and early on he tortures the youngest of them (Tevez) for an awfully long time in a sequence both gratuitous and incompetently staged. The violence is all out of proportion to the tone of the story, and I daresay I’ve never seen an entire village burnt to the ground to so little affect in a film before. Not even the villagers seem to mind all that much, they just shrug and take their places in the background of the next scene.

Amongst those doing the shrugging are Rooney Mara and Martin Sheen as some sort of Catholic relief workers. She teaches English and either can or can’t speak Portuguese depending on the requirements of any given scene, while he hangs around the sidelines of the story sipping whiskey doing an old drunken Irish priest caricature from a 1930’s movie. Besides these kids, nobody is in their comfort zones nor at their best here. This includes the viewer.