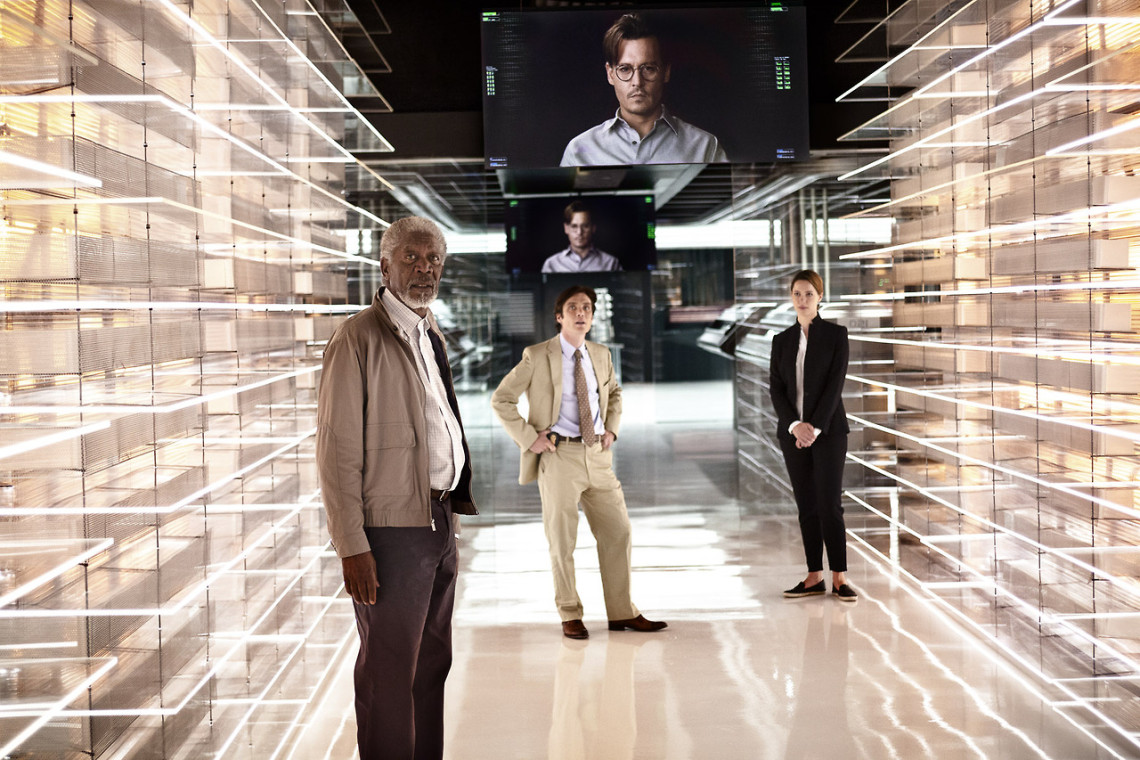 The greatest frustration of Transcendence is that, as its narrative slowly tailspins out of control, we can observe a fleeting glimpse or two of the film it could have been amidst its clunkier overtures. Among the myriad of 2014 releases unleashed upon viewing audiences to date, worse have graced the big screen, but few have whiffed so hard on their potential as this one. Transcendence boasts a bevy of talent (including Inception cinematographer Wally Pfister, making his directorial debut), a classically-rooted, socially-conscious sci-fi set-up, and the pop entertainment currency of Christopher Nolan, but squanders its promise in two hours.

Most of the discomfit that comes with watching Transcendence stems from seeing gifted people screw the pooch and waste a perfectly good basic conceit. Nearly as much, however, stems from the fact that the film just isn’t very good. You would think that any production originated by the Nolan Gravy Train might show more hallmarks of quality than pockmarks of imperfection. At worst, one should expect a film bearing even his partial fingerprints to look good, play smoothly despite bloat and excess, and end up an above-above-average and cerebral diversion; too big for its britches but handsome and smart enough to warrant praise.

Yet Transcendence, despite being the product of an award-winning DP, has a veneer that’s best described as slick but sloppy, one that’s shot adequately but edited choppily. Worse, the film is sluggish as it clumsily attempts to juggle five years’ worth of occurrences in 109 minutes, all the while pulling a Sunset Boulevard by starting at the end. The opening sequence, in which Paul Bettany’s melancholy tones hint at the aftermath of the picture we’re about to watch, is Transcendecne‘s first red flag. The rest all come in a hailstorm of disappointment and spurned ideas.

The film uses the staple “science gone wrong” trope of the genre’s golden age, all in a misguided attempt at reflecting on the rise of social media (a buzz phrase the cast repeats constantly, but to no meaningful payoff). Husband and wife duo Will (Johnny Depp, mercifully being allowed to play someone other than himself) and Evelyn Caster (Rebecca Hall, sadly given very little of value to do), artificial intelligence gurus of the highest echelons, work tirelessly on perfecting hardware capable of sentience and possessing collective intelligence; when an anti-technology terrorist group (dubbed RIFT) carries out assassination plots against AI researchers across the country, Will takes a radiation-laced bullet for his troubles.

But there’s hope for Will yet: Evelyn won’t take “slow, agonizing death” as the final answer to her man’s woes, so she determines to upload his consciousness into the leftovers of their aforementioned life’s work with the hesitant aid of their friend, Max Waters (Paul Bettany). Despite his naysaying, they succeed, and Will becomes a literal ghost in the machine, sparking immediate alarm among not only RIFT’s morally schizophrenic membership, but Will’s colleague Joseph Tagger (Morgan Freeman), and a minute detachment of government spooks led by Donald Buchanan (Cillian Murphy).

All of the outburst over Will’s ascension to godhood feels overblown, but panic there must be, lest the plot dissipate and Transcendence devolve into nothing more than CGI-animated Will playing house with the isolated, increasingly wary and long-suffering Evelyn. And therein lies the film’s biggest trouble: it’s utterly bereft of tension, only the hand-wringing of a group of apparently very privileged, entitled white kids who decry Will’s brand of technological advancement at the ironic end of a hashtag. For all of their neuroses (and propensity for murder), none of them can articulate why transcendence is such a big screaming deal.

A better movie would give us a reason why. Transcendence gives us an Apple commercial. Once safely entrenched in an underground compound, Will cures blindness, grows plant life in the blink of an eye, purifies the world’s drinking water, and generally uses his powers for good. Theoretically, developing a hive mind among every person he comes into contact with is scary, but there’s no credible threat here, no matter what the script has to say on the matter. Will never transgresses enough that we see the danger everyone else – including Max and Joseph, who inexplicably join with RIFT solely to satisfy story demands – claims he represents.

Ultimately, the film is an exercise in boredom. Pfister has so much creativity up his sleeve that the effect of watching it go to seed is stunning. How does a movie with concepts this strong, a cast this good, and a cinematographer of Pfister’s caliber go so wrong? Partially, Transcendence proves why cameramen don’t usually make great directors, and for all of Pfister’s efficacy behind the lens (it’s worth noting that he didn’t shoot this film), he’s ill-equipped for juggling a filmmaker’s duties. Hopefully, this serves as a teachable moment for him, and he sticks to what he knows.

We may spend years mulling over the source of Transcendence‘s missteps and shortcomings. Then again, we might casually forget the film ever existed a month after its release. Pfister has given us a movie with lots on its mind, but nothing to say, and the potential for conflict, but no capacity for dramatizing it. The film is at its most compelling when it’s about two people in love trying to hold onto each other, but even then, Pfister keeps the gears in neutral. For a movie about progress, Transcendence is remarkably, tragically backwards.